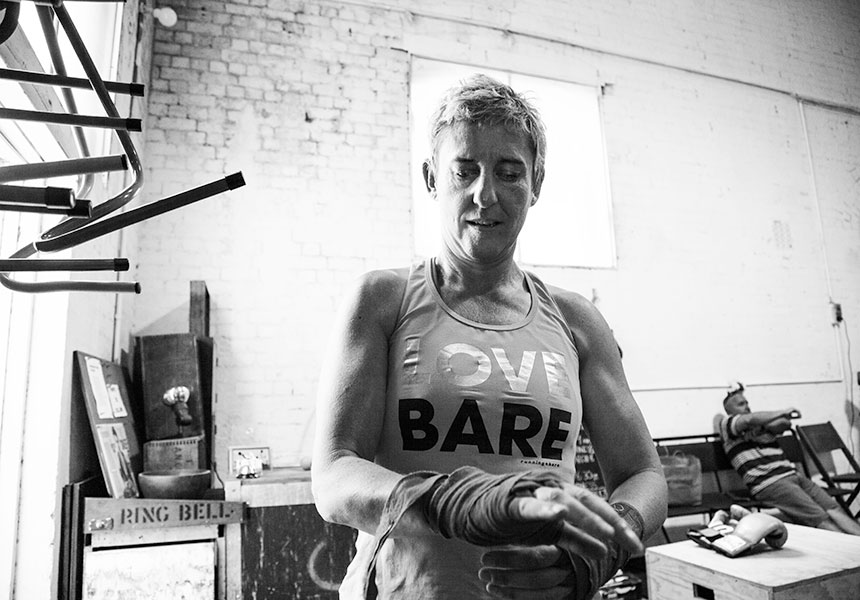 It’s like a trip to the badlands, getting to Australia’s only female owned and run boxing gym.

You skirt the Melbourne Ports down Footscray Road, cross the Maribyrnong River where a fleet of scallop fishing vessels that have seen better days are moored, hang a left with all the trucks and rumble towards the Westgate Bridge. There’s a sign, which I missed a couple of times. Turn left and don’t keep going or you’ll hit the river. Turn a sharp left again and you are in a perfectly preserved industrial precinct in Melbourne’s inner west. Not an apartment or trendy cafe in sight. You’ve arrived.

Pushing through a heavy industrial door, you enter a cavernous double story workshop that has been transformed into an old-school boxing gym. Rubber mat flooring mutes the echoes. There’s a weights area to the right. A boxing ring to the left.  Red boxing bags are suspended from overhead beams.

The 49-year-old has been around the local boxing scene for almost two decades.

The death of her father in 1994 spurred a new direction. She quit her job as a journalist, enrolled in a creative writing course at the University of Melbourne and started ‘boxercise’ at the local gym.

Falling for the camaraderie, technique and power of the sport, she started sparring with the university boxing coach – who she subsequently married.

“I was writing book reviews and remember thinking, ‘I wonder if I should have a boxing fight and write about it’,” she says.

The original concept bagged her a literary agent and a book deal within a fortnight.

She started doing the rounds of boxing gyms, training every day to prepare for her first (and the first) amateur women’s bout in Victoria at the Mooroopna indoor basketball stadium. She won in the second round.

The book came out with a demure portrait of a model on the cover.

“They didn’t really know what to do with this idea of a woman boxing,” she says.

“They didn’t really know how to market it.”

The book was, pardon the pun, a hit. Re-issued in 2007, Mischa was pictured in her boxing gear seated on her bed on the new cover.

On the back of this success, she was offered a second book deal and a ticket to compete in the US. She won the Women’s National Golden Gloves, the Ringside World Championship and the Georgia Games Medal.

“The fights took me across the United States and gave me an opportunity to meet the genuine hard-core pioneers who had pushed themselves into the sport,” she says.

“Women in their mid-forties who were putting back in, running tournaments, running gyms and trying to give other females opportunities. “

Back in Melbourne, Mischa developed a loyal band of followers – both men and women – who colonised local gyms and community halls to spar.

A little over a year ago, she took the plunge and opened her own gym, Boxing Central.

“I had enough money to cover the rent for a couple of months and a core group,” she says.

“You don’t need that much to get started. All you need is people. You just need each other.”

Mischa and her long-term coaching partner Sam Visciglio teamed up on the project.

“We offer personal training and group fitness, which is like boxercise with a bit more attention to technique,” she says.

“We use pads, glove and partner work. It’s a circuit class with 40 per cent punching work.”

Her oldest client is a 68-year-old woman, who “punches the pads and does a bit of skipping”.

“The goal is to nurture and foster women’s boxing in Australia at the grass roots level, that’s what creates the identity of the place.”

Business has grown 100 per cent in the past 12 months.

My Small Business: Teaching women the art of boxing