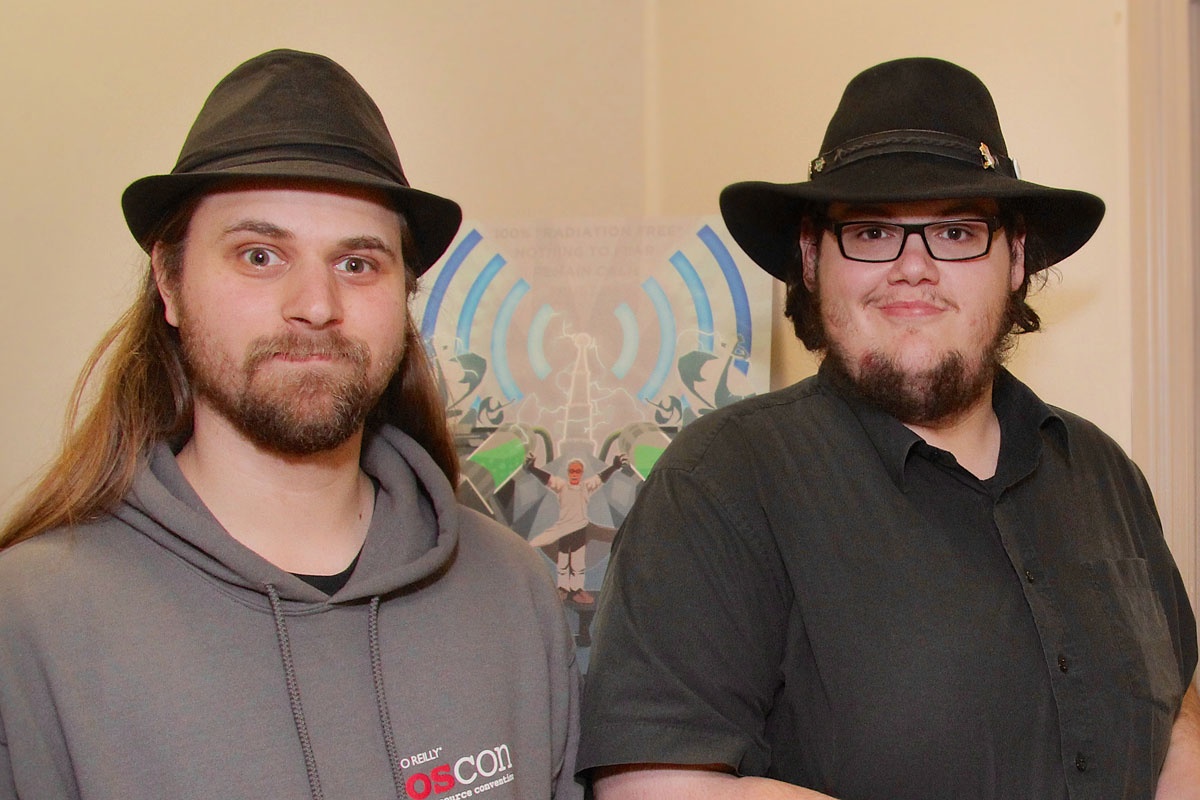 It’s a 36-degree day in Hobart, and I’m sitting in an 1820’s sandstone building that’s connected to one of the fastest internet networks in the world. Despite the intense heat, the two bearded, long-haired Millennials with me are dressed in black and sporting fedoras. In the room next door, a guy who wears a top hat to work is writing a textbook on coding for smart phone apps.

On this Friday afternoon at the height of summer, I’m not sure what aspect of this scenario is more incredulous.

The offices of Secret Lab may be situated on the oldest intact intersection in Australia (Murray and Macquarie Streets), but its founders, Paris Buttfield-Addison and Jonathon Manning, are cutting-edge independent computer game developers.

Recipients of the prestigious national ICT Pearcey Award in 2010, the pair – both just 27 years old – have already notched up three years working in Palo Alto, California, for tech start-up Meebo and have developed games and mobile applications for countless local and global clients.

Their Play School app built for the ABC was named one of Apple’s Top 30 apps of 2013 and, at an age where most Gen Ys are still starting their careers, these guys are taking a step back from the client side of their business to dedicate more time to creating games.

Paris and Jon met in Year 10 at the Hutchins School in Sandy Bay, Hobart. Both went on to study at the University of Tasmania (UTAS), where they completed Computer Science degrees. In their final year, they bagged their first big break when they were awarded a scholarship from the now-defunct Apple University Consortium to travel to the annual Apple Developer Conference in San Francisco .

The first game they created was for a final-year university assignment in 2007.

“Companies pitch for small projects and students form teams and build them,” Paris tells The New Daily. “Our company specialised in underwater imaging and they pitched a game project. It worked out quite well and we more or less thought we could make a business out of it.”

These guys are a tight unit – so much so, that they even complete each others’ sentences.

Deciding to stay put in Hobart so they could build their business, they worked out of coffee shops in the early stages.

“I kind of like it here, it’s a good lifestyle,” Paris says.

“The amount of effort in uprooting ourselves just didn’t seem worth it at the time and it still doesn’t,” Jon adds.

It was when Apple turned its development tools over to the public to create mobile apps for the iPhone that Secret Lab really gathered momentum.

“We were one of the first 4,000 companies that they accepted. It was luck more than anything at that point,” Paris says. “We built a small game called ‘Culture’, which was a little puzzle game for the iPhone.”

It was $3.00 per app and they sold a couple of thousand dollars’ worth.

“It wasn’t much – but it was enough to justify continuing,” Paris says.

“We switched our focus to taking client work and, from 2010 onwards, built client games mostly for the iPhone and later the iPad.”

Their best-known game is the Play School game for the iPad. It’s so intuitive that a toddler can work through the different stages, helping Humpty Dumpty decide what to do for his birthday without parental intervention.

Jon, a natural evangelist, demonstrates how it works. “It was designed for users who don’t have well-developed motor skills, so it needed to withstand being banged but also prompt activity if nothing happens.”

“There’s a lot of physics behind it,” Paris says as they go through the demo. “All those shapes – they fall exactly as they should.”

The ABC game won them awards and kudos, Meebo came knocking on their door and they decamped to Palo Alto for three years to work on cutting-edge apps and games.

It was fun, they learned a lot, Jon thought the food was great and Paris found a cool hat in Berkeley that inspired their current ‘men in black’ look. “We also got a really good understanding of how to build products and how to market and build a business around that, which was really beneficial.”

But at the end of the day, the pair found the global headquarters for IT innovation somewhat insular.

“Most products being developed are targeted towards males in their mid-20s, who are moderately or highly wealthy, and live in an urban centre,” Jon says.

They returned to Hobart and worked for the company remotely until it was acquired by Google in mid-2012.

While in the US, they also started writing books for Wiley’s ‘Dummies’ series and technical publisher O’Reilly.

“There’s zero money in books,” Paris says. “But it’s a good way to fine-tune our skills.”

While the current business plan is to develop, market and sell their own games, the books have enabled them to create training courses for game developers in Melbourne, Sydney and, from this year, Brisbane.

“With a training course you can prepare a set of materials and do three days’ of training for the equivalent amount of income for a medium sized game project,” Jon adds.

Their income is erratic and confounds their bank. “[It’s] a huge amount, then a small amount and then nothing at all and then a huge amount,” Paris says.

“Sometimes we panic – but then we think back to the main plan and making our own games and we relax again.”

Some may think Hobart’s a bit remote from the game developer scene, but Paris disagrees.

“Where else do you have fibre covering the entire CBD?” he asks.

The office was connected to the NBN three months ago.

“It is absolutely incredible,” says Jon. “The biggest thing has been the upload speed … we can upload files at a rate of about four to five megabytes per second and we’re able to send huge files.”

They have three games in production slated for staggered release from April onwards through Apple’s app store.

One of the games they’re working on, Leonardo’s Moon Ship, is about a character based on Leonardo Da Vinci who builds and operates his own Moon Ship. It’s a whimsical, tactile and beautifully-illustrated game targeting the adventure gaming segment.

Button Squid, a puzzle-adventure game for tablets and phones scheduled for release in mid-2014, is based entirely on Secret Lab’s IP and characters. The player controls a hat-wearing octopus who collects buttons.

“You’re guaranteed money but it isn’t your product,” Jon adds.

“We [want to] spend more time developing our own work, which is the ultimate dream.”

The Secret Lab have a floating team of about 10 contractors working with them, mostly sourced from UTAS. More than five of their contractors have been poached by Apple and Google. Both Paris and Jon are constantly approached by the global behemoths.