Asking yourself four questions will help you make an informed choice on your mortgage. Photo: Getty

At a certain point in life, many wonder what’s better: Pay off the home loan as soon as possible, or top up your superannuation?

If your emergency cash buffer looks OK and you have enough to cover you for about three to six months if you lose your job, the super versus mortgage question is a good one to ponder.

On the face of it, there’s a compelling case for building up your super – you can take advantage of the magic of compound interest (and, potentially, some tax breaks as well) – all while interest rates on mortgages are low.

If you’re getting 8 per cent compound interest on super and paying only 3 per cent on your mortgage, building up super might seem a good option.

But financial decisions are about psychology as well as numbers. Much depends on your debt comfort zone.

It’s best to seek professional assistance from a financial counsellor or adviser. But here are some questions to consider along the way.

1. Am I ‘on track’ to have enough super upon retirement?

Use the government’s Moneysmart retirement planners or your super fund’s calculator to check.

If it’s looking sparse – perhaps due to career breaks or part-time work – you might consider salary sacrificing extra into your super (on top of what your employer already puts in there).

An additional $50 a week, for example – even just for a few years – can help remedy your meagre super projections.

Try the Industry Super or Moneysmart calculators to see how much extra you’d have at retirement if you salary-sacrificed into super for a few years.

Consider seeking advice from your super fund on your super investment options and age pension entitlements.

You might also consider an after-tax personal super contribution (that is, putting extra money from savings or from your take-home pay into super).

The contributions may be tax deductible, but even if not, the returns in super are tax friendly. 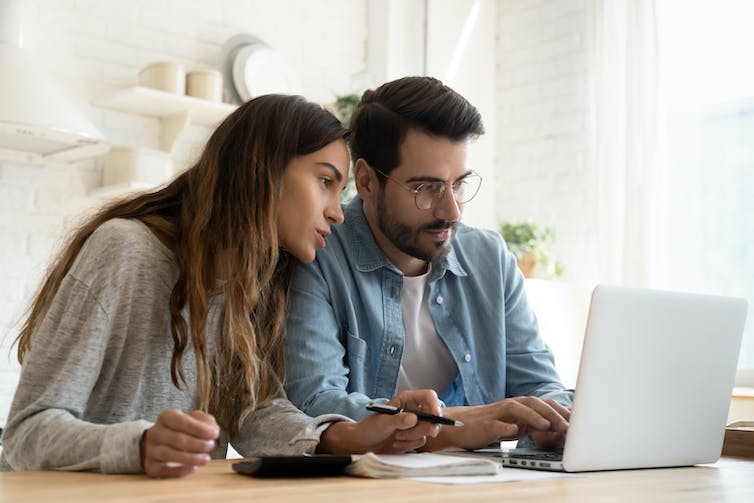 Are you ‘on track’ to have enough super upon retirement? Use online calculators to find out. Photo: Shutterstock

2. What about the pension?

Are you expecting a full age pension?

To find out if you’re likely to qualify for one, use an online calculator or ask your super fund.

People with “too much super” don’t get the pension (although most retirees get some part pension).

For some, the more you put into super, the less you get in age pension payments.

For single home owners, the total asset threshold for a full age pension is $270,500 (including super but excluding your main residence), while the part-age pension threshold is $593,000.

For couple home owners, the combined total asset threshold for a part-age pension is $891,500 (also including super but excluding the main residence).

If you’re on a median income and your super balance is predicted to land between the lower and upper asset thresholds for the pension, some models predict that for every extra $1000 put into super at age 40, you would only be about $25 per year better off in terms of retirement income (due to the tapering off in eligible age pension income).

For people on low incomes, extra super contributions may not be the answer at all if the result is more financial stress during your working life and immediate housing security risk.

3. If I retired with a mortgage, could I cope?

Many people end up retiring earlier than planned, due to health or other issues.

If you were still paying off your mortgage at retirement, would you feel comfortable about that? Or would it be a source of worry?

Traditionally, most people enter retirement having paid off their home loan, but now more are approaching retirement with some mortgage remaining.

It might not be the end of the world if you had $100,000 left on the mortgage when you stop working.

Doing so can also increase your age pension entitlement (as your primary residence is exempt from pension assets tests while super is not).

The wealth accumulation in superannuation is going to outpace the interest on a mortgage in most cases for some time, even after you retire.

Even so, you might feel it’s worth making the last vestiges of your debt go away in retirement so you can stop worrying about it.

4. Will the choices I make today cost me later – and am I OK with that?

Australian property values have skyrocketed and many have borrowed more to pay for renovations.

The full “cost” of a renovation may not be apparent at first.

That’s compound interest for you. You’d hope to get that in capital gains from the renovation.

But it’s never just about the finances. The extra mortgage might be worth it because it paid for a home that brings comfort and joy (as well as the capital gains).

Likewise, paying off your mortgage ASAP might mean forgoing the extra you’d get if you’d put it in super.

But for some, wiping out a mortgage will be worth it to be debt-free.

Perhaps after the mortgage is gone, you can maximise salary-sacrificing into super until retirement, while also reducing your tax bill.

At least do the sums

There’s always more than one solution.

To know what’s right for you, you’ll need to get advice for your personal circumstances.

But it’s good to look at where your super is now and where it’s heading, and calculate your debt-to-income ratio (debt divided by income).

It’s often used to gauge how serious (or not) your debt is.

Lenders and regulators might consider a debt-to-income ratio over six times your income to be “high”, but your personal debt comfort zone might be much lower.

Emotions play a bigger part in financial planning than many like to admit.

Desire to pay off a mortgage quickly can be influenced by how you were raised, feelings of anxiety and stigma that often come with debt, and Australia’s cultural bias toward debt-free home ownership.

Depending on circumstances though, it may be time to rethink the bias to paying down housing debt over wealth accumulation in super.

At least do the sums, so you can make an informed choice.

Teen completes bid to fly around the world

Top up super, or pay off the mortgage? Ask yourself these questions to decide

Teen completes bid to fly around the world