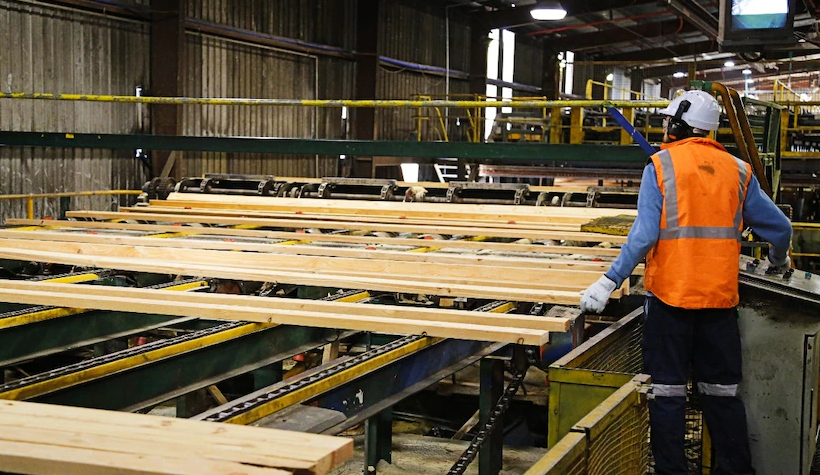 The timber industry is calling for a time extension to the government’s HomeBuilder scheme to ease demand for both domestic and imported timber.

While new applications for the federal government’s HomeBuilder program closed this week, the industry predicts timber processing mills will be under pressure to meet the demand for at least the next six months.

One of Australia’s largest structural timber manufacturers, Timberlink Australia, which has mills in South Australia’s South East and in Tasmania, was among the Radiata pine processors that have ramped up production.

“We are doing all that we can to produce as much timber as possible, including extra shifts at the mill,” Mr Tyson said.

He said demand for building materials had increased since COVID-19, with high levels of housing starts and renovation activity.

“We are expecting the tightness in supply to ease slightly over the coming months as inventory improves and import levels adjust,” Mr Tyson said.

“Timberlink is producing more timber than at any other time, and our $100 million investment in our Australian mill upgrade program will shortly further increase our production capacity.”

OneFortyOne — the largest integrated forestry company in South Australia and a large producer of structural timber — said a reduction in imports had also impacted the supply.

Executive general manager Cameron MacDonald said imports had previously made up 25 per cent of demand for timber in Australia.

“We’re seeing a worldwide phenomenon where government stimulus has seen a lot of new home building activity, as well as do-it-yourself projects, and the timber prices in the US have doubled,” Mr MacDonald said.

“So, a lot of those imports are going to America rather than coming to Australia and it’s really been a significant drop in imports.”

He said he hoped common sense would prevail with the HomeBuilder scheme, which required construction to start within six months.

“Everyone’s asking the federal government to relax that deadline so that we can push some of this demand out because it’s not just timber, it’s tradies, it’s bathroom fittings, everything’s in short supply at the moment,” he said.

“My concern is that two years out, we’re going to see significant drop in demand for new homes, whereas if we relax those timelines on HomeBuilder, I think we’ll see a more orderly reduction in demand.”

“A number of processing mills are working at capacity and will continue to do so until things settle down,” Mr Violante said.

“This is a good problem to have, but it highlights the need for Australia to be self-sufficient.”

The skyrocketing demand has come as OneFortyOne officially opened the first of two continuous-drying kilns in Mount Gambier, which will drive efficiency on the site.

The $16 million project has the capacity to dry 240,000 cubic metres of timber per year and a second kiln — expected to be constructed by December — will double this capacity.

“They will reduce our energy consumption by roughly 25 per cent and ‘debottle-necking’ one of the middle parts of our site,” he said.