A home ownership gap between men and women fuelled by gender pay disparity has increased the risk of women entering poverty in retirement.

But the gap could shrink through private-sector policies that speed up pay rises for female workers, as new research suggests females with higher incomes are more inclined to purchase a home.

CoreLogic’s Women and Property: State of Play report, released on Monday, found that less than a quarter of Australian homes are owned by a sole female compared to 27.7 per cent owned by a sole man.

That’s despite women accounting for more than 60 per cent of Australian single-parent or sole-person households.

Given the estimated $7.5 trillion housing market accounts for 52.6 per cent of Australian household wealth, researchers believe women are losing out on a “big source of household wealth” that is regarded as one of the main “pillars” of retirement.

CoreLogic head of research Eliza Owen told The New Daily the report highlighted how wealth inequality, created through decades of income inequality, manifests once people reach the end of their working life.

“If they still have rental or housing payments when they reach an age when they’re on a lower income such as the pension, that increases the risk of poverty among women,” Ms Owen said.

“Research also suggests women are more likely to exit home ownership when they end a partnership, and it comes back to the idea that home ownership not only creates wealth, but can be used for funding aged care or healthcare costs.”

However, the analysis also revealed women are more likely to own homes in areas with higher average household incomes.

Ms Owen said this trend suggests women could be empowered to jump on the property ladder if their pay rose to the same level as their male colleagues.

As it stands, a woman on the average full-time wage requires 10 more months to accumulate a 20 per cent deposit on a median-priced home ($583,157) compared to the average-earning male.

The report also found that homes owned by both a man and a woman (“mixed gender”) comprised the highest proportion of home ownership, at 43.9 per cent. 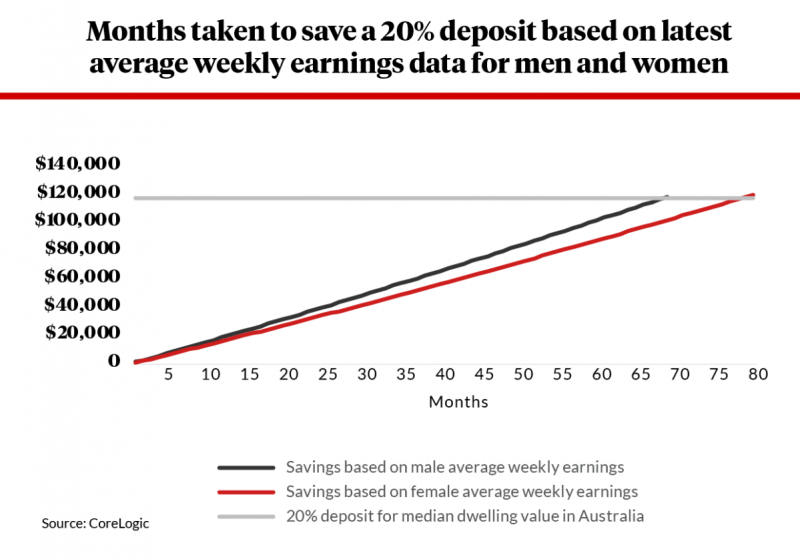 How the gendered home ownership gap can be fixed

That timeframe increased by one year over the three months to December as women suffered a “triple whammy” of job losses, reduced eligibility for government support, and a rise in unpaid labour.

Swinburne Professor of Housing and Social Policy Wendy Stone said the research was a reminder for governments and banks to implement mechanisms that address women’s experiences around child rearing and separation, and lower pay more generally.

For example, Professor Stone said brokerage or rent-to-buy schemes tailored to recently-divorced women could help them catch up, as their ex-male partners usually retained ownership over the family home.

Waiting 101 years for income parity to fix housing inequality isn’t adequate for the next generations of women,” Professor Stone said.

Equity Economics lead economist Angela Jackson said the government should be looking at its policy suite with a “gendered lens” to increase economic equity, which would then lead to higher home ownership rates among women.

“The economic inequities of Australian women is something that we just live with today, but relative to the rest of the world, Australia is falling behind,” Ms Jackson told The New Daily.

“When you have the IMF, the OECD and the World Bank saying that a gendered lens is a necessary part of good fiscal policy, why it isn’t a part of the toolkit of the Commonwealth Treasury is an interesting question.”