Australians are flooding into the property market in record numbers despite the country suffering its worst recession in almost 90 years.

The value of new home loans jumped 12.6 per cent in August, following an 8.8 per cent rise in July, and first-home buyers led the charge.

The number of new loan commitments in August for first home buyers has hit the highest level since October 2009.”

Their surge in interest comes after the federal government announced ‘HomeBuilder’ grants worth $25,000 in June and an extra 10,000 places on the First Home Loan Deposit Scheme (FHLDS) in October. 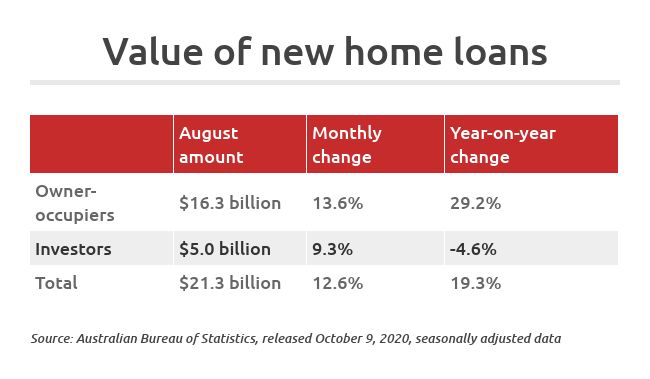 The FHLDS allows Australians to avoid paying lenders mortgage insurance when buying property with deposits as low as 5 per cent.

But most economists would argue the actions of the Reserve Bank have had a greater impact on the property market than those of the federal government.

In March, the Reserve Bank slashed interest rates to a record low 0.25 per cent in an attempt to stimulate the economy – with economists at Commonwealth Bank later describing interest rate cuts as “the single most important driver of real property prices over the longer run”.

Since the RBA’s record-breaking cut, lenders have slashed home loan rates so aggressively that mortgage repayments are almost on par with rents for properties of a comparable size.

Which has created an opportunity for middle-income Australians.

“Owner-occupiers and prospective buyers are being supported this year by HomeBuilder, falling interest rates and the extension of the [First Home Loan Deposit Scheme],” ANZ Research economists Adelaide Timbrell and David Plank wrote in a note.

“The concentration of COVID-19 job losses to younger, lower-income cohorts may also mean that the average upgrader has not been hit by economic weakness as hard as the average worker in the economy.

“Upgraders generally account for 70-75 per cent of owner-occupier lending. These data are consistent with other indicators that point to housing being much more resilient than we had expected.”

“The evidence continues to mount that Australia’s housing market is going to come through the COVID‑19 pandemic largely unscathed,” he said.

“It is quite remarkable that we are in the midst of the biggest economic downturn in a generation and yet new lending for homes is pushing higher at an accelerating pace.

“And as the latest dwelling price data indicated, home prices outside of Melbourne are little changed over the COVID‑19 period.

Once again the power of interest rates is on display as it pertains to the Australian housing market.”

Firstly, brokers Mortgage Choice said part of the record-breaking surge was down to slow processing times – “with lenders reporting that August commitments reflect borrower demand from June and July”.

Secondly, it came before the imposition of tougher restrictions in the country’s second-largest state of Victoria.

RateCity.com.au research director Sally Tindall said she expects “the number of new home loans will fall next month as Victoria’s second lockdown flows through to the home lending market”.

Thirdly, although the data suggests property prices will soon take off again, that’s unlikely given unemployment is rising and economic stimulus is being cut back.

“Working against this though are a likely increase in distressed sales as bank payment holidays and various income support measures end and the huge reduction in underlying demand flowing from the collapse in immigration.”

Commonwealth Bank last month tipped a national peak-to-trough fall of 6 per cent – depending on our response to the virus.

Dr Oliver said on Friday that once mortgage deferrals end and stimulus is reduced, “higher unemployment, a stop to immigration and rent holidays will push prices down by another 5 per cent into next year”.

Catch up the market with the IFM Investors Wrap
Today's Stories