House prices surged in September, but not in these two cities

House prices rebounded across most capital cities and a pricing surge continued to play out across regional areas in September – despite Australia remaining in the grips of a once-in-a-generation recession.

But values in Melbourne and Sydney went backwards, falling victim to weak international migration and limits on inspections and auctions.

CoreLogic’s September Home Value Index shows the average national house price fell 0.1 per cent in September, as a result of the falls in Melbourne (down 0.9 per cent) and Sydney (down 0.3 per cent).

Prices in every other capital city increased between 0.2 and 1.6 per cent, while prices in regional areas jumped 0.4 per cent.

Early signs of a ‘spring lift’

CoreLogic head of research Tim Lawless told The New Daily record-low interest rates and the Treasurer’s announcement on lending reforms had given buyers a confidence boost, while a lack of stock kept a lid on prices.

Mr Lawless said total listings were down 22 per cent on 2019, but could pick up in spring.

More property listings would put downward pressure on prices, but the signs so far suggest there’s enough demand to meet a lift in supply. 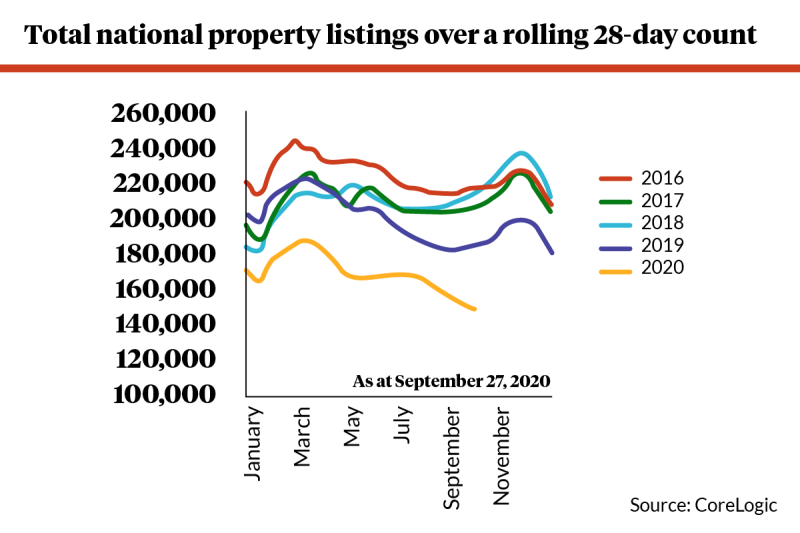 “Melbourne’s usually the largest auction market in the country, but that hasn’t been the case over the last few months, where we saw 90 auctions held over the last four weeks, compared to 2000 a few months ago,” Mr Lawless said.

“What [eased restrictions] mean for the market depends on whether or not we start to see signs of more urgent sales coming onto the market.”

Data released by APRA on Wednesday shows 9 per cent of mortgages ($160 billion) are still on hold – weeks after the banks started asking customers to resume making repayments.

Mr Lawless said the urban-rural divide could widen off the back of reports that city-based buyers, motivated by lifestyle changes and greater affordability, are pursuing regional properties in greater numbers.

And with more Australians soon to make a decision on their mortgage-deferred properties, Mr Lawless said satellite cities could “benefit” from a long-term boost.

“Newcastle, Wollongong, Ballarat, Bendigo, the Sunshine and Gold Coasts were expected to benefit from that trend, but they also offer up lower price points,” Mr Lawless said.

Reading into today’s prices is ‘dangerous’

AMP Capital chief economist Shane Oliver said current prices do not reflect the broader economic turmoil, with the market “artificially” propped up by government stimulus, banking deferrals and other forms of assistance.

“The outlook into next year is very messy with a wide array of positives and negatives. And it’s widely divergent across cities, within cities and across units versus houses,” Dr Oliver wrote in a note on Thursday.

The economist said high levels of unemployment and distressed sales triggered by the tapering of repayment holidays and JobKeeper payments are the biggest risks to prices, along with rising rental vacancy rates and a 80,000 per annum population hit to immigration.

But those downside risks could be mitigated by future announcements, he said.

“The government appears very focused on supporting housing … with regulatory easing to remove responsible lending obligations of banks and [a likely] extension of HomeBuilder and the First Home Deposit Scheme against the backdrop of more stimulus to be announced in the budget.”

House prices surged in September, but not in these two cities