Subscribe direct to our news source →
Finance Property This is how much your neighbour is spending on their COVID renovation 10:00pm, Sep 25, 2020 Updated: 3:54pm, Oct 9

Take a look over the fence and chances are tradesmen are busy attaching a small porch or renovating your neighbour’s kitchen.

You may also find others converting their flimsy lounge room set-up into a dedicated home office, complete with television-style backdrop-worthy library.

Whatever the scale, home renovations have become a hobby horse for many during the pandemic, with spending on furnishings soaring by more than 200 per cent.

And now, the true cost of the home improvement rush can be revealed.

Suncorp Bank, which examined the amount Australians have invested in renovation projects, found home owners are spending $63,188 on average to spruce up their properties. 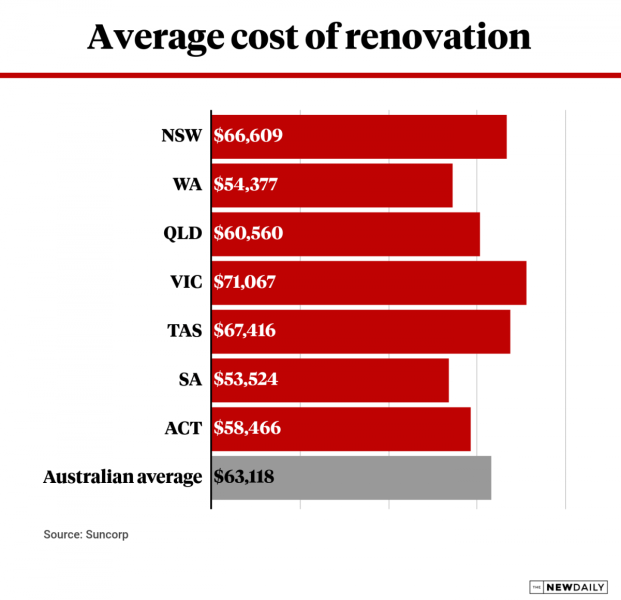 Although they faced the harshest lockdown in the country, Victorians topped the charts by spending an average of $71,067 on new projects, followed by those in New South Wales ($66,609) and Queensland ($60,560).

Breaking down those numbers even further, Suncorp found a standard $60,000 project could net a home owner a refurbished kitchen with premium fittings, as well as a high-quality bathroom and a small outdoor deck.

Suncorp Executive General Manager Consumer Lending Bruce Rush said Australians who delayed overseas trips because of travel bans are instead organising renovations to improve the comfort, style and liveability of their properties.

But he said planning a renovation within budget could be a tough task. 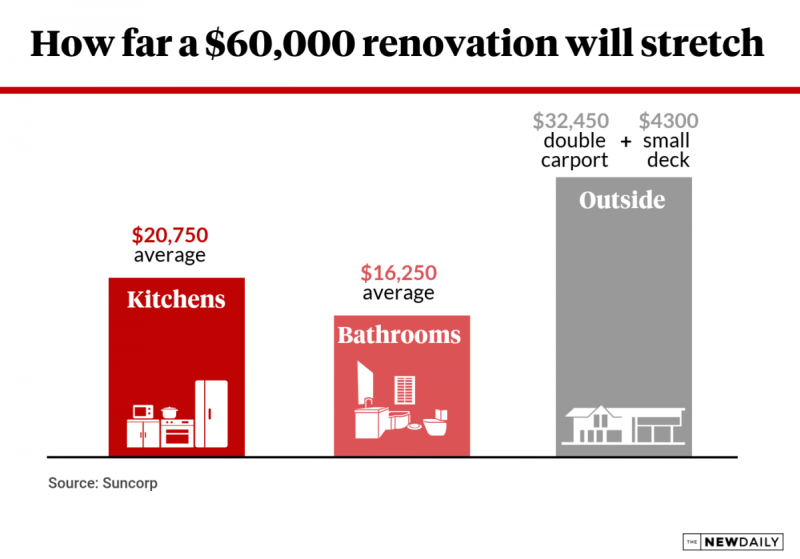 “Many customers are keen to improve the look and feel of their home but don’t know where to start,” Mr Rush said.

“The best way to keep a renovation on track and on budget is to do as much research as you can before getting started.”

Account executive Lachlan Brown and his wife had their travel plans cancelled soon after the pandemic struck.

But their attention soon turned to fast-tracking plans to renovate a two-bedroom apartment in Randwick that they purchased last October, with their 10-week build now in progress.

Although they always intended to renovate the property, Mr Brown said pandemic living and a strengthened budget encouraged them to go further with their plans.

“Our apartment was well overdue for an renovation, so we’re doing the kitchen, bathroom, laundry and cabinetry in the living space,” Mr Brown told The New Daily.

“We’re also removing a wall between the kitchen and living space to introduce more light and get better functionality, to eventually get a modern Hamptons-meets-coastal vibe.

“It’s been a good distraction for us and the more we’ve gotten involved in it, [the more] we found we could spend a lot more time researching cost-effective appliances, designs and what other builds were going on in the area.”

Mitcon Build builder Mitch Pocklington said renovation enquiries soared once the Morrison government’s HomeBuilder scheme was announced, with business now booked out until the middle of 2021.

Mr Pocklington said many clients intended to increase their home’s footprint to include an extra bathroom or bedroom in an extension, or increase outdoor living space with a pergola and swimming pool.

However, aspiring home owners commonly run into issues when trying to ensure their build remains cost-effective and on budget, he said.

“Ninety per cent of the time, plans never get built, and that’s because an owner goes to an architect and gets something drawn out without them understanding the real-time costs of building,” Mr Pocklington told The New Daily.

“For instance, the cost of timber can go up 2 to 5 per cent every November or December.

“And clients spending thousands of dollars up front on plans and engineering when they should be consulting builders first to help them design a project that matches their budget.”