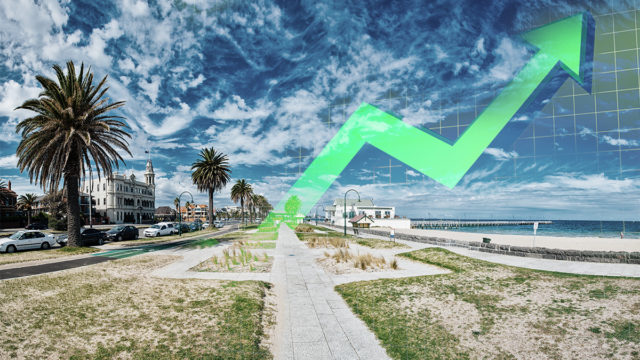 Commonwealth Bank says property prices will rebound strongly in the second half of 2021.

Commonwealth Bank says Australian property prices have held up better than expected and should rebound strongly in the second half of 2021.

CBA said in a research paper last week that prices outside Victoria had avoided the massive falls predicted in March and April, as most governments had lifted restrictions earlier than anticipated.

And it expects this trend to continue.

It predicted a national peak-to-trough fall of 10 per cent in April, but now it predicts a fall of 6 per cent and for prices to hit rock bottom in the first quarter of 2021.

Though not in Melbourne.

There, prices are expected to suffer a peak-to-trough fall of 12 per cent, as a result of the city’s strict second lockdown. 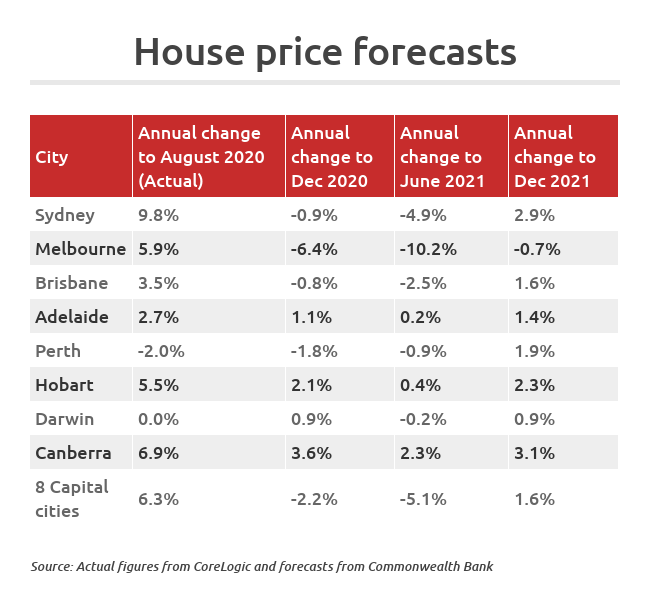 “Unemployment has not yet peaked in Victoria and rising unemployment is a clear headwind for property prices,” said Gareth Aird, head of Australian economics at Commonwealth Bank.

“In addition, the household perception of the national market is consistent with a further softening in prices and the demand impulse from net overseas migration is non-existent.”

The collapse in migration is more acutely felt in Melbourne and Sydney, where CoreLogic data shows prices fell by 4.3 per cent and 2.6 per cent respectively between April and August.

“In the context of an extraordinary negative economic shock, the fall in national dwelling prices is modest,” Mr Aird said.

But where to now?

In addition to forecasting a national peak-to-trough fall of 6 per cent, CBA’s modelling points to a rapid recovery in the second half of 2021.

Its central scenario is for prices to rise 3 per cent over six months “as the economic recovery gains traction and incredibly low interest rates once again become the dominant influence on dwelling prices”.

“The RBA cuts to the cash rate in 2019 and 2020 that took mortgage rates to record lows are the main reason why dwelling prices nationally have not fallen all that much considering the huge negative shock to the economy,” Mr Aird said.

“The RBA has tended to play down the influence of monetary policy decisions on dwelling prices. But we believe that changes in interest rates are the single most important driver of real property prices over the longer run.”

This is partly because buyers can service higher debts when interest rates are low, enabling them to bid up prices, and partly because rate cuts increase the attractiveness of property relative to term deposits and savings accounts.

But record-low rates will struggle to prop up prices if there’s another wave of infections.

Mr Aird said: “Any imposition of restrictions would likely see prices fall more than our central scenario, which is based on no further lockdowns and a recovery in national economic activity from Q4 2020.”

BIS Oxford Economics chief economist Dr Sarah Hunter said the data supported her forecast of a peak-to-trough fall of 10 per cent and showed parts of the economy were already recovering.

Asked whether the price falls would speed up as deferrals came to an end, Dr Hunter said she expected more of a “slow burn”.

“You’d need a situation where lots of owners or investors decided to sell all at once within a very short timeframe to see multiple percentage point declines over the space of a few months,” she told The New Daily.

“It’s likely to be more of a slow burn not too dissimilar to the current pace, as people take time to decide for their own personal position that they need to sell.”