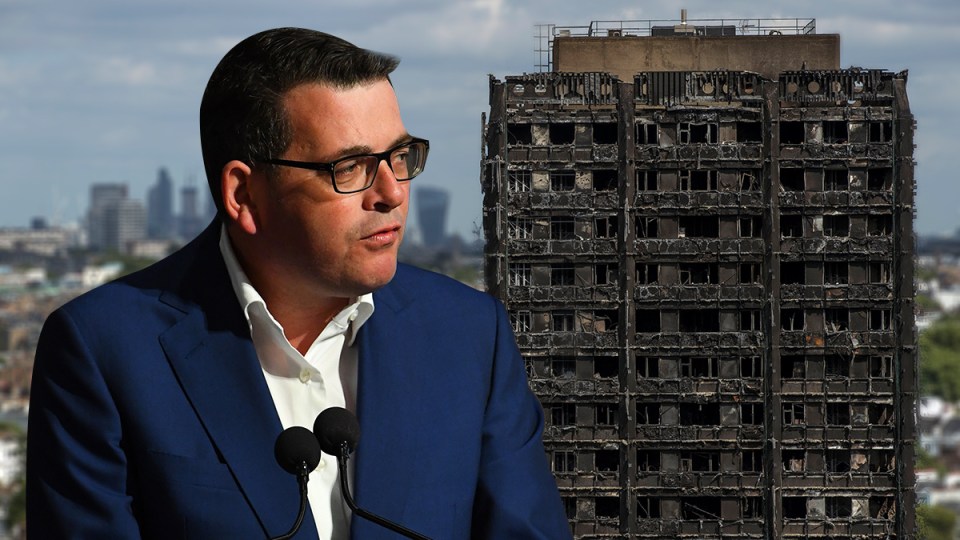 Owners have complained that the government’s cladding response has been disjointed, disorganised and confused. Photo: The New Daily

Owners of apartments covered in “high-risk” combustible cladding could have to temporarily pay to remove the material, months after the Victorian government said it would foot the bill.

Unit owners are continuing to receive threatening building orders telling them to remove the dodgy panels at their own expense.

And they’ve said the organisations responsible for overseeing the repairs are providing conflicting advice and taking too long to respond to enquiries.

Victorian Premier Daniel Andrews announced in July that the government would set aside $600 million to remove dodgy cladding from “high-risk” buildings.

A new organisation called Cladding Safety Victoria (CSV) would oversee the process, and the government would go after dodgy builders, Mr Andrews said.

But councils are still asking some owners living in “high-risk” buildings to pay for the repairs. And some are threatening legal proceedings if owners don’t remove the cladding on their building by October 2020.

More than 400 buildings are deemed “high risk” in Victoria.

(More than 1200 buildings in the state have some amount of cladding. And hundreds more have non-compliant cladding in NSW and QLD, where governments have yet to commit public funds for repair works.)

But roughly six months after Premier Andrews’s announcement, CSV has only started due diligence on 15 buildings – which is worrying, given it is aiming to repair roughly 100 buildings a year from 2020.

Should this happen, owners would have to pay to remove the cladding, and ask the government to reimburse them down the track – which is a very different deal to the one Premier Andrews offered in July.

Edward Wilmoth is one of those owners.

He bought a two-bedroom apartment in Kensington, in Melbourne’s inner west, for $550,000 in November 2018, before discovering that his building was covered in non-compliant, combustible cladding.

The City of Melbourne’s Cladding Audit Team classified Mr Wilmoth’s building as “high-risk” and issued his owners corporation with a building order requiring to remove the cladding in January 2019.

After an unsuccessful appeal, the Cladding Audit Team re-issued the building order at the end of October 2019, more than three months after Premier Andrews said the government would pay to to remove the cladding from all “high-risk” buildings.

The City of Melbourne then said CSV was unlikely to pay the repair bill, as Mr Wilmoth’s building was covered in a timber composite cladding, which is currently excluded from the government program.

Mr Wilmoth told The New Daily he was worried the government wouldn’t reimburse him if he paid for the initial repairs.

“We are being asked via building orders from the council to fix buildings at our own cost whilst being rated ‘high risk’ and no information has been provided on how money spent might be reimbursed by CSV in the future,” he said.

“[The process] is completely opaque, and what they are saying in public forums is not what residents of affected buildings are actually experiencing.”

Many don’t know how much their final repair bills will be. And the prospect of sky-rocketing insurance premiums is only adding to the stress.

“I wouldn’t be surprised if CSV backtracks on their promise to assist in funding all high-risk buildings and tightens their criteria more,” he said.

“They just don’t have enough promised funding and have their heads in the sand.”

Retiree Marilyn Sneddon finds herself in a similar situation. She is 74  and her husband is 79. They bought an off-the-plan apartment in Melbourne’s CBD in 2012 and moved in two years later.

Buying the apartment was a major part of their retirement plan.

Like Mr Wilmoth, their owners corporation has building orders from the City of Melbourne asking them to remove the combustible cladding from their building by October 2020.

The owners corporation’s insurance premiums increased from $134,000 to $300,000 after the cladding was discovered, too.

CSV has not yet told them whether they will fund the repairs.

“There’s no way we can afford to pay this. I mean, we could empty out our superannuation, I suppose, and live on nothing. But apart from that, it’s just wrong and unfair,” Ms Sneddon told The New Daily.

She and her husband are reluctant to pay for the repairs, as they worry they’ll never see the money again.

The most probable cause of yesterday's fire in Spencer Street was a discarded cigarette that ignited combustible material on the balcony. These images from the 26th floor are a reminder for the community to fully extinguish cigarettes & limit items stored on a balcony. pic.twitter.com/AME1BcAjVe

“Apparently the council is offering a loan – I’m laughing while I say this – through our rates. But we’re not entering into a loan,” Ms Sneddon said.

“My husband will be 80 next year, and I will be 75. I worked right up until last year, so we’re not entering into a loan at our age. It’s laughable.

“And we’ve been told if individual owners don’t pay, individual apartments will be locked out … it’s scary.”

A spokesperson from the Victorian Government said “owners and councils need to work together towards a sensible solution”.

The revelations came after Australia’s state and federal building ministers met on Friday to discuss the combustible cladding and insurance crises currently engulfing the construction industry.

The ministers failed to find a solution to either problem, and agreed to hold another meeting in April.

Meanwhile, the firefighters’ union told a NSW building inquiry that some products being used to replace non-compliant cladding could enable “fires to burn hotter and faster”.