A new Suncorp survey has found Australians prioritise pets over friends when looking for a new home.

The Brisbane-based bank asked more than 1600 Australians what home features and lifestyle factors most influenced their search for a new home.

Most placed more importance on finding a pet-friendly home than one close to friends and family.

Suncorp’s executive general manager for lending, Glenn Haslam, said the survey showed pets were “adored members of the modern Australian family”, and that this was “even more true for younger generations”.

Of those aged 18 to 34, 59 per cent said a home’s pet-friendliness was more important than living near their mates.

That Australians care more about a home’s pet-friendliness than moving close to friends and family might surprise some readers.

But it made perfect sense to 28-year-old renter Hayley O’loughlin. 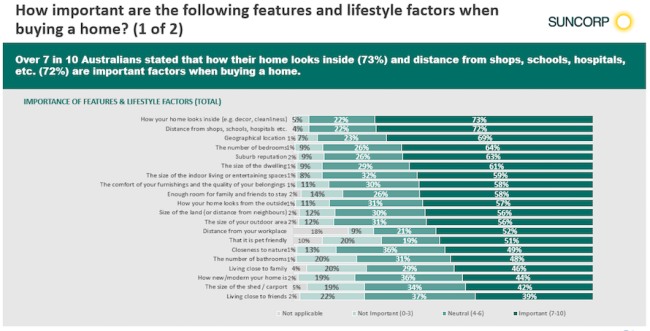 A lawyer and dog owner living at New Farm, Brisbane, Ms O’loughlin describes Winston, her six-year-old toy cavoodle, as “the sweetest boy in the world”, “one of the family”, and her and her husband’s “first-born child”.

She told The New Daily finding a pet-friendly property had never been that difficult – though she said that was probably because Winston only weighs six kilograms and doesn’t shed hair.

“Whenever we were looking for a place, the first thing we said is, ‘Are you pet-friendly, because we have a dog, and we need him to live with us’. And we never found any issues with that,” Ms O’loughlin said.

“We included favourable images [in the application]. We sent them photos of [Winston] in a Hawaiian shirt, and tried to win them over that way, [by saying] ‘look, he’s sweet and never barks, and he’s not going to cause anyone any trouble’.

“Because I think the biggest concern for property managers and owners, particularly if you’re in a body corporate, is if the dog barks and annoys other people.”

According to tenants’ rights advocates, the ease with which Ms O’loughlin has navigated the rental market as a pet owner is the exception rather than the rule.

Rent.com.au CEO Greg Bader said finding a pet-friendly property is “bloody hard” for most renters – even though 62 per cent of Australian households own pets, according to the RSPCA.

“That’s the simple truth,” he told The New Daily.

“Of all the properties we have in Australia, about 10 per cent say ‘pet-friendly’, you can have a pet. About 50 per cent say ‘no pets’, and about 40 per cent don’t specify.”

Mr Bader said landlords need to appreciate they are leasing a home, not just an asset, and provide renters more freedom to make spaces their own.

“I think there’s a lot of mythology amongst landlords and agents about how much damage pets can cause. We really haven’t seen evidence that it’s a widespread problem,” he said.

Tenants in the Australian Capital Territory can own a pet without seeking their landlord’s permission, and Victorian renters will have very similar rights when new laws come into effect in July 2020.

But tenants in most other states still have to seek written permission from their landlords before inviting a pet into their home.

And landlords in Western Australia are allowed to charge renters a “pet bond” of up to $260.

“That these rules exist at all is an indication of just how much power landlords have to set the agenda, to set the culture around renting,” Mr Patterson Ross said.

“Which is why we need much more sensible and active engagement from government on mitigating that power.”