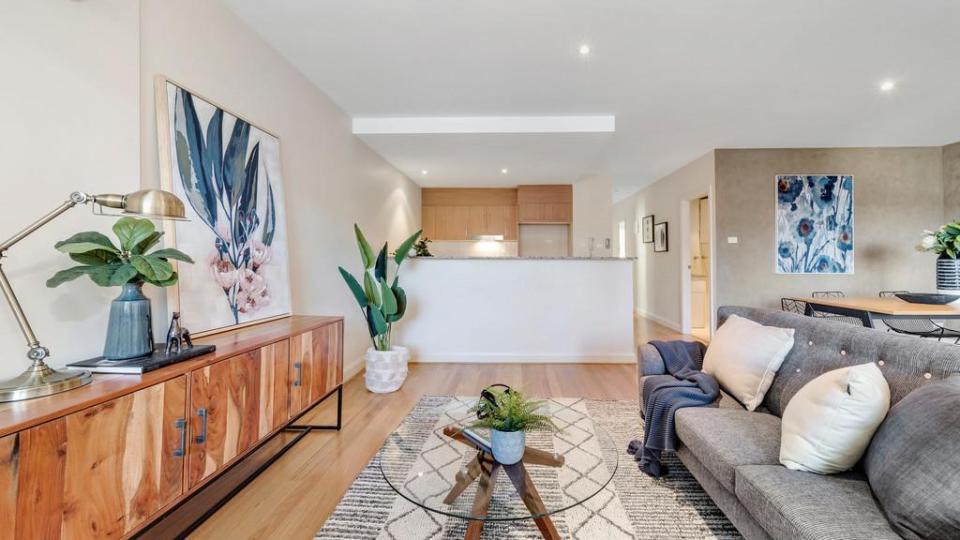 More and more Australians are living in apartments closer to the city. Photo: realestateview.com.au

Australians are ditching dreams of a big backyard and squeezing into inner-city pads to save cash – a cultural change that is seeing homes shrink to their smallest since the start of the noughties.

Fewer home-buyers are looking to move into massive “McMansions” on the urban fringe, instead wanting to build on smaller blocks – and that’s dragging down the nation’s average new-house size.

A report by Commsec, released on Monday, showed the average size of a freestanding house built in Australia last financial year was 222.8 square metres. That’s 1.3 per cent smaller than the previous year’s average – and the smallest since 2002.

According to Brendan Coates, program director of Household Finances at the Grattan Institute, rising land prices is “the number one driver of” shrinking house sizes.

“Land is becoming increasingly expensive and, therefore, Australians are quite rationally economising by building on smaller lots and smaller houses as a result,” he told The New Daily. 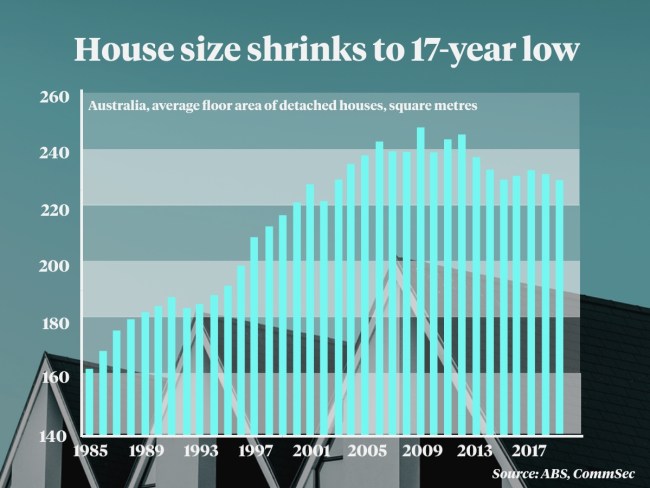 Dr Ho said the cost of building the second storey of a house, per square metre, was 50 per cent higher than building the first storey.

“So what you’ll find is people try to make do with smaller housing.”

Greater spending on parks and public spaces – from both developers and governments – and a growing workforce are supporting the transition towards smaller homes, Dr Ho said. 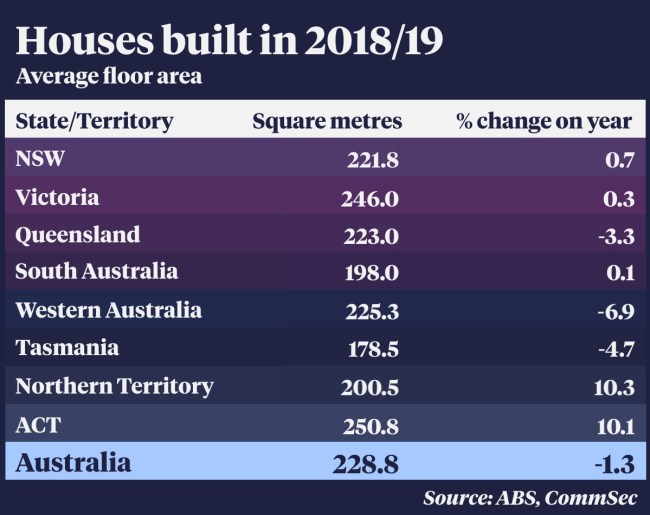 “If both parents within a household are working, they have less time to manage a 700 square-metre block of land. And they value time spent with family over managing their blocks of land,” he said.

“How many parents want to cut their grass rather than take their kids out for a beautiful day? It’s something like that.”

Australians are still living it large, though.

The US is the only country in the world that builds larger homes. And while Australian homes are getting smaller, they are still 25 per cent bigger than they were 30 years ago.

“Not only are [Australia’s] houses far bigger than those built in the 1980s and before, but the standard of fit-out today is far superior with higher quality kitchens, bathrooms, floor coverings and inclusions like air-conditioners,” Commsec economist Craig James said.

Apartments are far bigger across the board, too. The average national apartment size is up 3.2 per cent year-on-year, while the average in Tasmania and Western Australia are up 18.4 per cent and 16.4 per cent respectively.

Unit sizes shrunk in New South Wales (2.1 per cent) and ACT (13 per cent), but Mr Coates said apartments would likely continue to grow in size, as more people end up living in apartments for longer. 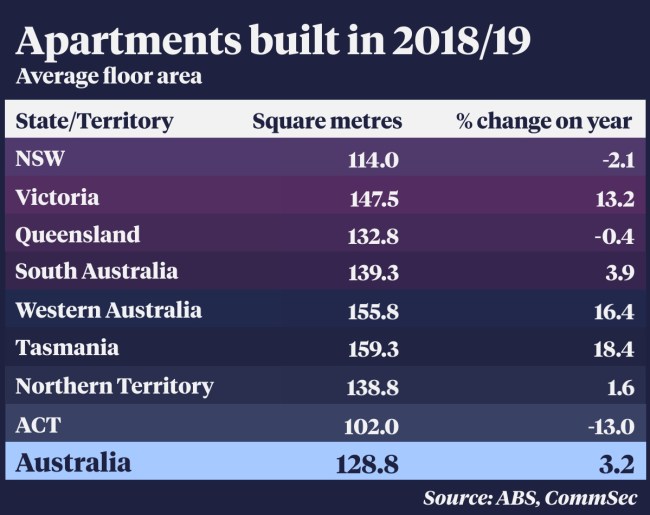 “You’d expect the average apartment to get larger, because more people would be living in apartments as a permanent form of living, rather than expecting a quarter-acre block with a detached house,” he said.

“Historically, that’s been seen as the Australian Dream, but that’s going to become harder to sustain in a world where Melbourne and Sydney have populations of 8 million people.”

That’s because we only have enough room to build large homes on the outskirts of our cities – and that’s a costly way of expanding, according to Dr Ho.

It eats into agricultural land, lengthens commutes, and requires governments to build more services and infrastructure.

“It’s not viable – because for every additional kilometre we need to extend the power lines and sewerage, all those kinds of things, it’s going to cost a lot more,” Dr Ho said.

“It’s more efficient and effective for the government to spend money closer to the city, rather than to continue to sprawl outwards – and how many people close to the city want to pay for highway extensions 50 or 60km away from the city?

“Government budgets are usually best spent where the large majority of people are.”