Property prices are growing at their fastest rate since May 2015, prompting economists to raise the alarm over rising household debt.

According to the latest edition of CoreLogic’s monthly Home Value Index, national property prices rose 1.2 per cent in October.

The increase marked the fourth consecutive month of national price rises, following an 8.4 per cent fall between October 2017 and June 2019.

Melbourne and Sydney continue to lead the pack, with values in the two cities lifting 2.3 per cent and 1.7 per cent respectively.

And a combination of ultra-low mortgage rates and lower serviceability requirements is driving strong price growth in other parts of the country, too.

Independent economist Warren Hogan said the v-shaped recovery was abnormal and demonstrated a reflating of the property bubble.

“The auction clearance rates and house price data we’ve got today confirm a V-shaped recovery in the housing market – and that is utterly uncharacteristic of this market historically,” Mr Hogan told The New Daily.

“What we’re going to see happen in our community over the next few months is [people putting forward] this idea that the rapid growth that we’ve seen is going to continue on indefinitely.

“And I don’t think there’s any reason why people shouldn’t say that – because interest rates are so low and banks are lending.” 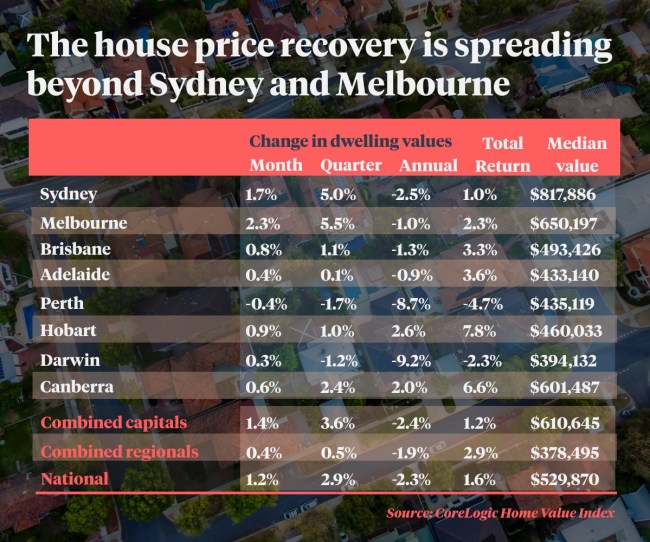 Over the past three months, prices in Sydney and Melbourne have grown at an annualised pace of 19.6 per cent and 21.6 per cent respectively.

Mr Hogan said there was “no doubt” the trio of RBA rate cuts had turbocharged the recovery.

And he said the expectation of continued price growth would attract more buyers into the market and push prices even higher.

“This rate of recovery that we’ve seen over the past few months will see us go back to the peaks of the market in Sydney and Melbourne before the middle of next year,” he said.

“And then, of course, we get straight back to the issues of affordability and fairness, and about the the role of investors, about inequality – all the issues that we were struggling with three of four years ago that we nicely dealt with by gradually deflating this bubble.

“We’re just tossing away all that good work.”

Economists look for a February rate cut from the #RBA with this week’s CPI inline with the Bank’s expectations, unlikely to see enough pre-Christmas data for a clear signal to emerge that would prompt anything sooner @BloombergAU #ausbiz pic.twitter.com/fBM1MTtB9O

He said Australia’s rapidly rising property prices would do little for the economy other than boost household debt levels.

“The RBA asserts dwelling price rises should support wealth effects and confidence, [so] metrics on retail sales and sentiment should be keenly watched for this,” Dr Joiner wrote on Twitter.

“I suspect the impact will be minimal at best, while the upside risk to credit growth is much more likely”.

According to the RBA, Australian households at the end of March owed $1.90 for every $1 earned in income.

Previous research from the bank found a 10 per cent increase in debt was linked to a 0.3 per cent decline in household spending – even when the value of a household’s assets increase over time. 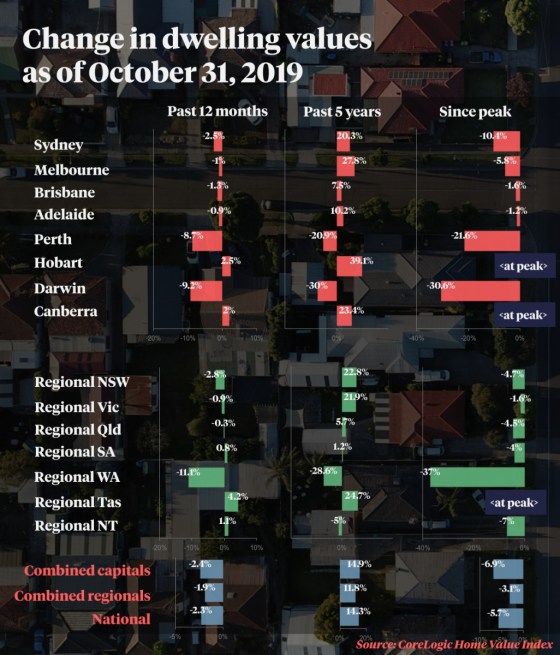 But he said the recovery might lose some momentum towards the end of the year, when auction volumes usually hit their seasonal peak.

The number of new listings is currently at its lowest level since the global financial crisis, meaning some of the recent price growth could be the result of modest demand meeting extremely limited supply.

An increase in supply could somewhat pull in the reins, Mr Lawless said.

“If selling conditions continue to improve, we might start to see a more substantial rise in new listings [in early December]” Mr Lawless told The New Daily.

“And if that does happen, that will be the biggest test for the market, in the sense that it will really test the depth of buyer demand.”

“Melbourne recently did provide us with a bit of a hint that maybe it can withstand greater volumes,” he said.

“The auction results last week for Melbourne, the week before Melbourne cup, were very large numbers, and we saw clearance rates holding around the mid-70s, so that’s a fairly healthy indication that clearance rates will hold up.”