The Coalition had already put in place “strong foundations” for supporting home ownership but needed to go further, Mr Morrison said at the Coalition’s campaign launch in Melbourne.

“So we have pledged to adopt a scheme … [that] will enable first home buyers to buy a home with a deposit of down to 5 per cent.”

Mr Morrison said the scheme will halve the time it takes to save a deposit. 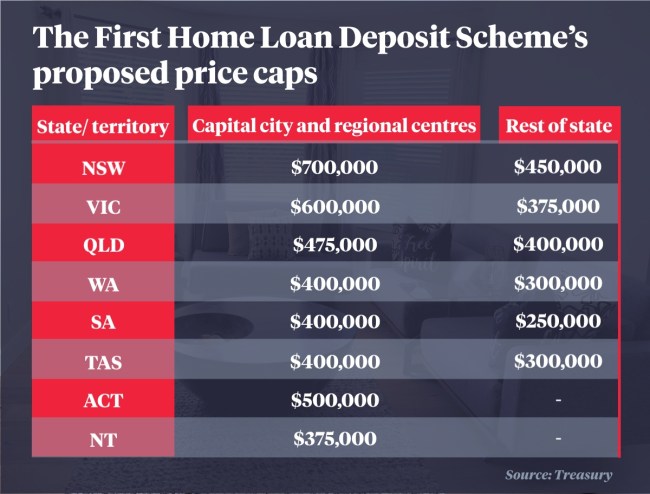 Critics such as the Grattan Institute’s Brendan Coates said the scheme, capped at 10,000 borrowers, was too small to make a dent in Australia’s housing affordability crisis.

And, if it got any bigger, it would likely turbo-charge house prices.

The scheme – which will see first home buyers put up a 5 per cent deposit and the federal government guarantee the difference of a standard down payment – kicks in on January 1.

Price caps vary according to location.

Here’s what first home buyers can buy under the scheme.

The Coalition’s deposit scheme allows first home buyers to buy properties in Sydney and regional centres up to a value of $700,000.

Would-be property owners intent on buying a home in Sydney will need to head roughly 30km out of the CBD to find a home within that price range.

Cabramatta, south-west of the city, has a handful of three-bedroom properties on the market for $700,000. As does Woodcroft and Blacktown.

If that’s a little far out, one-bedroom apartments in Surry Hills, Darlinghurst, Potts Point and Pyrmont regularly sell for $600,000. And two-bedroom units in Ryde can be found for less than $700,000.

The price cap for the rest of the state is $450,000 – enough to buy a modern, four-bedroom home in Kurri Kurri, in the Hunter wine region. Or a similar-sized property in Wauchope, near Port Macquarie.

The scheme’s participants should be able to buy an old three-bedroom house in Heidelberg West, Glenroy or Gladstone Park, roughly 15km from the CBD; a brand-new, one-bedroom unit in Fitzroy; or a three-bedroom house with a sizeable backyard in Belmont, half an hour’s train ride from Geelong city centre.

Beyond the confines of the city, buyers will be given $375,000. That should buy a three-bedroom house in Echuca or Kennington, in north Victoria.

Half a million won’t get you much on the fringes of Melbourne and Sydney, but it’s more than enough for a family home in parts of Brisbane.

At $475,000, the scheme’s price cap for QLD cities and regional centres should cover the price of a three-bedroom house in Capalaba, Taigum or Thorneside, roughly 20km from Brisbane CBD.

A two-bedroom apartment close to the city centre, in New Farm or Fortitude Valley, would also come under the price limit.

And regional buyers will have plenty to choose from in the sub-$400,000 market, too.

Property prices have been falling in Perth since the end of the mining boom, meaning affordability is at a multi-year high.

The federal government has said it will give $400,000 to would-be home owners buying in Perth and $300,000 to buyers in regional areas.

In the city, that should buy a three-bedroom home on a large block in Wanneroo, Thornlie, Balga and Singleton, or a two-bedroom unit in Perth’s CBD.

First home buyers will be able to pick up a three-bedroom home in Holden Hill, roughly 10km north-east of the CBD, for that price.

Alternatively, DIY fans can find a handful of fixer-uppers in neighbouring Windsor Gardens and Paradise.

Those who’d rather live closer to the action could snap up a modern two-bedroom apartment in the East End, or an older-style unit in the CBD.

The Coalition’s deposit scheme gives first home buyers in Canberra a budget of $500,000.

Roughly $100,000 less than the median house price in Australia’s capital, that allowance should be enough for a three-bedroom house roughly 20km outside the CBD, in suburbs such as Florey, Holt, Higgins and Scullin.

Meanwhile, buyers can snap up one-bedroom units in inner-city suburbs such as Forrest and Barton for less than $500,000.

First home buyers should be able to find a three-bedroom house roughly 15km out of the CBD for that price. Complete with a backyard and spa, this three-bedroom property in Moil is prime example. It sold for $337,000 in October.

As one would expect, apartments come with a much lower price tag, with two-bedroom units in the city regularly exchanging hands for less than $300,000.