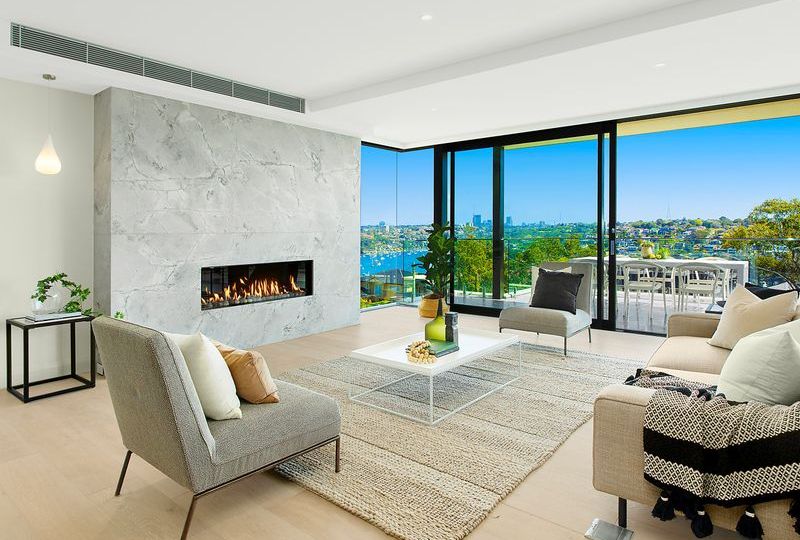 Mosman, NSW is home to some of the most expensive property in Australia. Photo: Simeon Manners

New data has revealed what it takes to break into the top end of the property market.

According to research from CoreLogic, only homes worth at least $2.16 million make it into the top 2 per cent of Australian housing.

CoreLogic head of research Tim Lawless said that’s because the national 2 per cent figure “is skewed higher by Sydney and Melbourne, where housing values are much higher”.

Elsewhere, the entrance requirement is somewhere between $1 million and $1.48 million, with Darwin the only capital city to have a six-figure threshold. 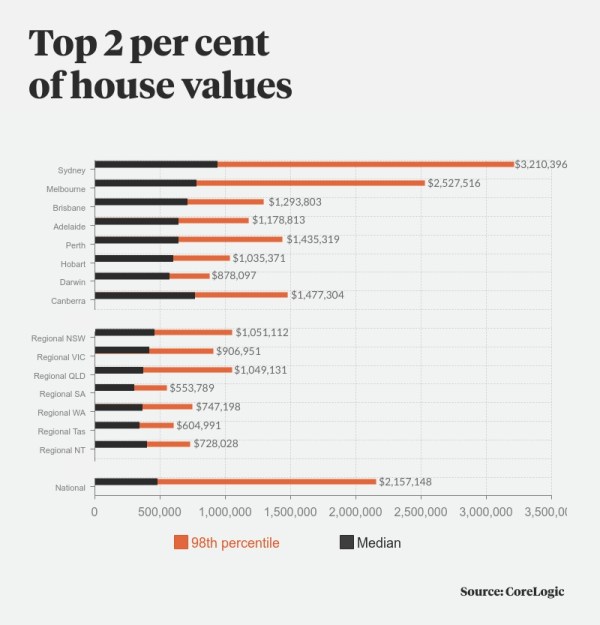 Cream of the crop

Owning a property worth at least $2.16 million isn’t much of a status symbol in Australia’s most aspirational suburbs, though.

Swing by Sydney, Melbourne or Perth, and you’ll find the top end of town sniffs its nose at anything valued below $3 million. 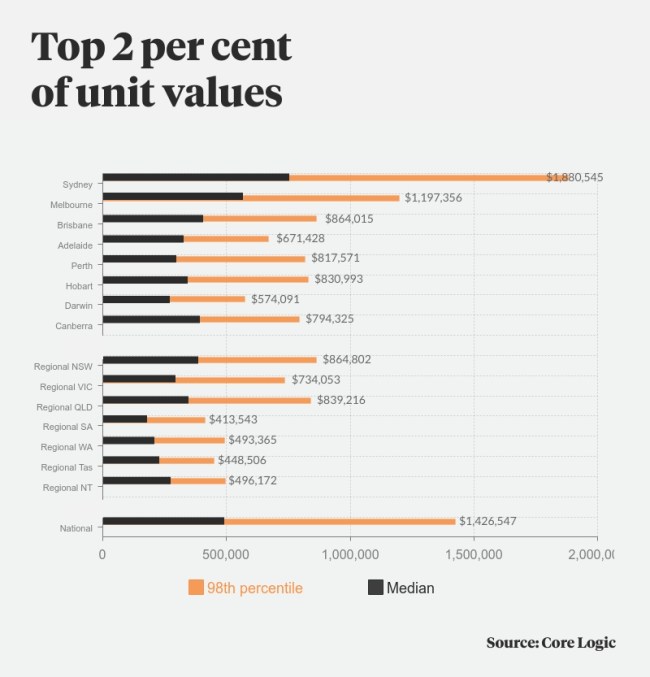 Unsurprisingly, the municipalities with the highest 2 per cent thresholds in NSW are all in Sydney.

Mosman and North Sydney, across the harbour bridge, are next on the list, with 98th percentile home values of $7.79 million and $6.04 million respectively.

The most valuable properties in Victoria are in the City of Stonnington, an area that covers South Yarra, Prahran, Toorak and Malvern.

That won’t come as a surprise to most Melburnians, with Toorak mansions regularly selling well into the tens of millions.

Home owners who want to break into Stonnington’s top 2 per cent will have to part with at least $6.88 million.

Second and third place goes to the municipalities of Melbourne ($3.94 million) and Boroondara ($3.90 million) respectively.

Here, the municipality with the highest 2 per cent threshold is Noosa, on the Sunshine Coast.

The beachside holiday destination leads the way with a $1.87 million threshold, followed closely by Brisbane ($1.52 million) and the Gold Coast ($1.33 million).

Adelaide. The City of Churches.

Property here is far more affordable than it is in Sydney and Melbourne, but you’ll still need to spend at least $1.5 million to break into the city’s top 2 per cent.

The municipality of Burnside tops the state’s list with an entry barrier of $1.66 million.

Unley, with its large blocks, wide roads and well-landscaped grounds, also has a 2 per cent threshold of $1.66 million. And Walkerville, north-east of Adelaide’s CBD, comes in third, with a threshold of $1.55 million.

For the past two years, The worst property downturn in history has rarely strayed from the headlines in Sydney and Melbourne. But in Tasmania, it has been an altogether different story.

As investment poured into the Apple Isle, property values in Hobart increased more than 38 per cent over the five years to September 30, 2019.

Entrance into the capital’s VIP property club will set you back $1.25 million – significantly higher than second-place Kingborough’s $874,000, and third-place Clarence’s $816,000.

The cheapest entrance to the 2 per cent club is in the Northern Territory.