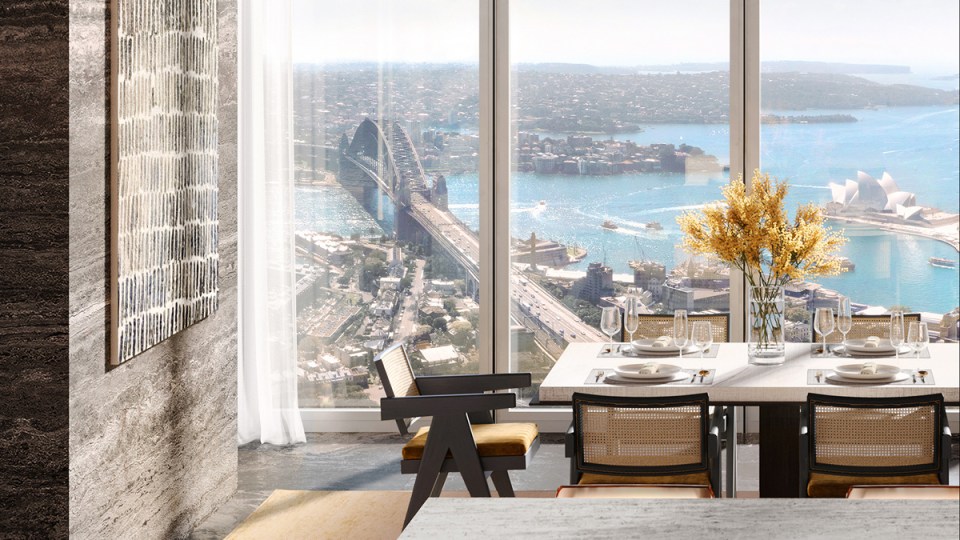 A three-floor apartment in Sydney's Barangaroo has sold for $140 million. Photo: Lendlease

A mystery buyer has paid a record-breaking sum for a three-floor apartment in Sydney’s CBD – in a building that’s not even finished.

The super-apartment, which tops the tallest tower in Barangaroo’s One Sydney Harbour development, sold for an eye-watering $140 million, making it the most expensive dwelling ever sold in Australia.

The apartment is divided into two parts – a two-storey penthouse with a “sub-penthouse apartment” taking up the floor below.

Altogether, the property will include nine bedrooms, with a private pool, spa, and gym on the roof, and developer Lendlease says the ‘significant’ main bedroom will be “bigger than most homes”.

“The sale of the penthouse at One Sydney Harbour is a paradigm shift for the Australian property market with an apartment claiming the title of Australia’s most valuable residential property for the first time, a title historically reserved for significant houses,” she said.

While the buyer was not specified, Lendlease said it is a local who intends to make the apartment their home.

The sale is good news for the developer, after its profits for the first half of the financial year fell a blistering 96.3 per cent, prompting the business to consider a significant restructure.

Meanwhile, developers around Australia are resorting to gimmicks such as offering would-be buyers free cars and furniture, or even helping pay a deposit to sell off excess stock without lowering asking prices.

Most expensive home in Australia

At $140 million, the residence is the most expensive home in Australia, with each square metre of floor space in the two-storey penthouse costing more than $100,000.

That property stands next to the third-most-expensive home in the country, another former Fairfax family property bought by fellow Atlassian co-founder Scott Farquar for a comparatively modest $71 million in 2017.

The median value of homes in the waterside suburb is approximately $7 million.