Banks are slashing interest rates on fixed-rate mortgages – signalling they believe the offical cash rate will drop to another record low.

This week, three of the big four banks cut rates on their fixed-rate home loans, by much more than they recently cut their variable rates.

But consumers still aren’t rushing to take them up – and experts say they might be right to wait.

Commonwealth Bank dropped rates on their fixed home loans by up to 0.29 per cent this week. NAB went a little further, with cuts up to 0.4 per cent. And ANZ topped them all, by slashing fixed rates by up to 0.5 per cent.

(Westpac moved in September, dropping fixed interest rates by up to 1.3 per cent.)

The recent flurry of cuts comes ahead of the Reserve Bank’s next interest rate meeting on Melbourne Cup day.

But, perhaps more importantly, the prospect of more RBA cuts had made these lower fixed rates less appealing to borrowers.

Despite one lender now allowing borrowers to fix their interest rate at 2.94 per cent until 2024, only 10.4 per cent of new home loans in July were fixed, according to ABS.

And the number of people searching how to break from their fixed home loan on Finder.com.au surged 296 per cent in the wake of October’s rate cut.

“A lot of people are holding off from fixing, I would assume, just to see how low [variable] rates will go,” Ms Tindall said.

According to AMP Capital senior economist Diana Mousina, ongoing weakness in the domestic economy means borrowers might be on to something.

“If you’re looking to get a mortgage, then I wouldn’t really be too worried about interest rate hikes anytime soon”, Ms Mousina told The New Daily.

Absent a major economic shock, Ms Mousina believes the Reserve Bank will hold off lifting the cash rate until at least 2021.

And if the central bank explores unconventional monetary policies such as quantitive easing, the next upwards movement in the official cash rate might not come until 2024, she said. 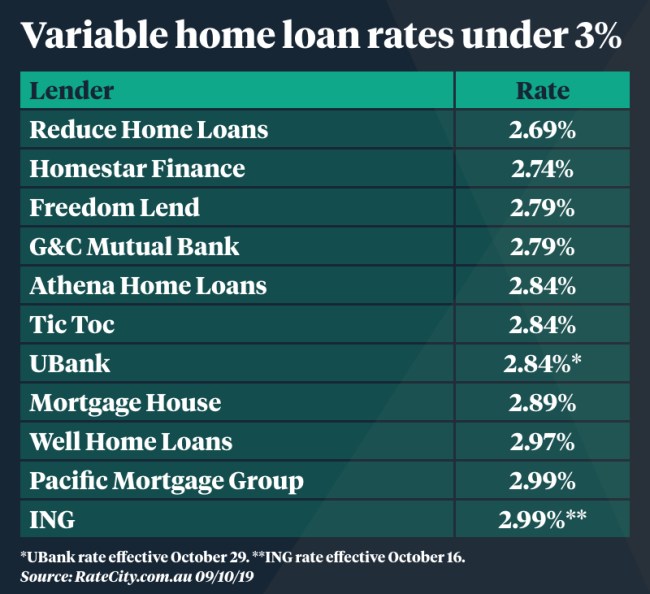 Despite rate hikes being off the table for the time being, though, Ms Tindall said switching to a fixed home loan could still suit some borrowers.

By letting borrowers know exactly what their repayments will be over a set period, fixed loans make it easier for borrowers to stick to a budget and draw up long-term financial plans.

Ms Tindall said those considering fixing their home loan should look at the comparison rate, as that includes all fees and charges, and the revert rate, as that’s what borrowers will pay once their fixed term expires.

“The revert rate is often a lot a higher … so it’s good to diarise the end of your fixed-rate and work out a plan of what you want to do,” Ms Tindall said.

“And then just understand what it means to enter into a fixed loan contract – because it is a contract, and if you break that contract, you will more than likely be liable for break fees, and they can run into the thousands.”

What’s more, most fixed-rate loans don’t offer a redraw or offset facility, and come with restrictions on additional repayments, which prolong the length of the mortgage and increase the total interest paid over the life of the loan.

“If you’re someone that really likes to know how much your monthly mortgage repayments will be and likes that peace of mind, then fixing could be a good option for you,” said Ms Tindall.

“But if you’re someone who’s going to be kicking themselves because they miss out on what is likely to be another variable rate cut, then perhaps it’s not.”