Property investors are riding a wave of looser bank lending

Investors are riding a wave of looser bank lending and flooding back into the property market.

According to the Australian Bureau of Statistics (ABS), lending to property investors increased 5.7 per cent in August, to $4.88 billion.

The large jump was much greater than the 3 per cent predicted by market economists, and came after a 4.7 per cent increase in July.

Owner-occupiers didn’t miss out on the cash splash, either, with lending to this segment of the market up 1.9 per cent in August, to $13.55 billion for the month.

But the significant spike in lending to investors was what piqued most commentators’ interest.

He said the 12 per cent increase in home loan lending over the past three months showed buyers had taken advantage of the RBA rate cuts and APRA’s easing of serviceability requirements. 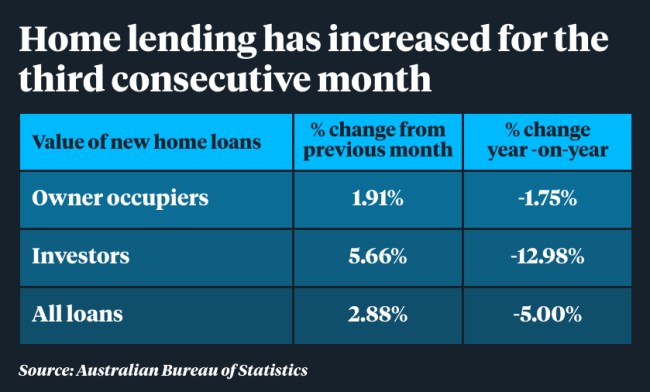 “The owner-occupier numbers have actually mellowed a little bit … from the prior month,” Mr Lawless told The New Daily.

“But to see investor finance commitments jump as much as what they have over the month – that’s probably the biggest surprise.”

Mr Lawless said a combination of factors explained the spike in investor activity.

“Part of it is because [the amount of investor lending] is coming from a low base, and investors are still a relatively small proportion of the market,” he said.

“And I think another factor simply comes back to the fact that lenders are becoming more competitive for [business from] investors.”

That the house price recovery has mainly been limited to Sydney and Melbourne also helps explain why the growth in investor lending outstripped the growth in owner-occupier lending in August.

Prices in Sydney and Melbourne have rebounded significantly over the past three months.

Given investors tend to focus on these markets, EY chief economist Jo Masters said it was therefore unsurprising that investors were flooding back into the market.

“We had a 1.7 per cent house price rise in both Melbourne and Sydney in September, which, in annualised terms, is pretty solid,” Ms Masters told The New Daily.

“And I guess if you’re thinking about it from an investor point of view, that price rise is measured against where else you could invest it – and in a low-interest rate world, when you see price gains of that level, it might be quite attractive to the investor segment.”

But while lending to investors is growing at pace, they’re not outbidding first-home buyers at auctions as much as they did during the last property boom. Not yet at least. 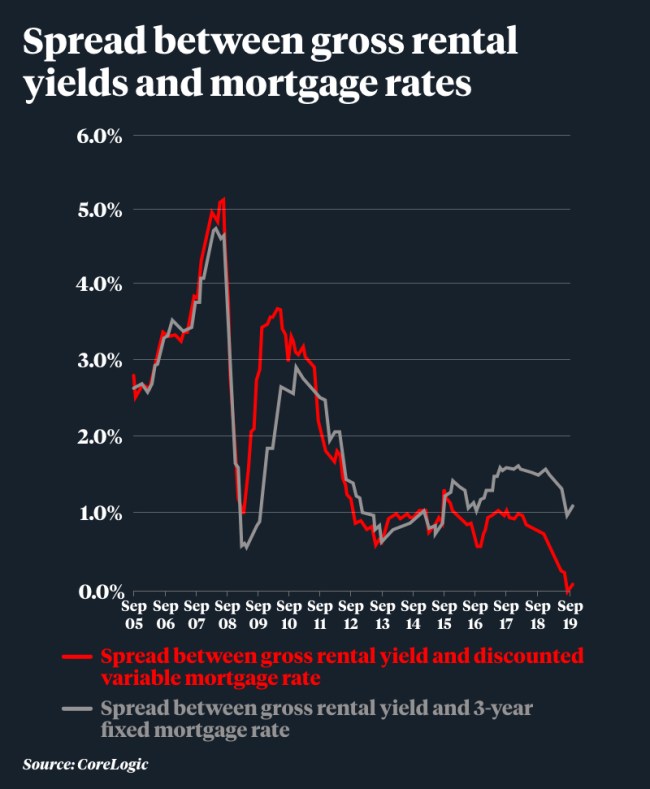 In New South Wales, where they’re most active, investors currently comprise 32 per cent of the market.

But steadily improving investor margins mean it’s very likely more will dip into the property market in the coming months.

The gap between the average three-year fixed mortgage rate and the average rental yield in Australia’s capitals has steadily fallen over the years to just 0.01 per cent – well below its decade-average of 1.4 per cent.

“Investors are going to be attracted to property once again because values are starting to rise, yields are higher than they used to be, and the spread between mortgage rates and rental yields – particularly for fixed-rate loans – is virtually nothing,” Mr Lawless said.

Coupled with the likelihood of more RBA rate cuts, the return of the investor means “there’s definitely much more upside to go in house prices over the next few months,” according to AMP Capital senior economist Diana Mousina.

And that spells bad news for first-home buyers struggling to save a deposit.

“If the economy continues to run at this soft pace, and the unemployment goes up as we think, then that would put a hand brake on the housing market,” she told The New Daily.

“But while we’re still seeing this momentum in investor demand, then this probably can continue for another few months.”

Property investors are riding a wave of looser bank lending