Why Perth’s housing market is stuck in the doldrums

Property prices may be booming again in Sydney and Melbourne, but Perth’s market is still stuck in the doldrums.

Prices in the Western Australian capital dropped 0.8 per cent last month and are now down 21.6 per cent from their 2014 peak.

Driven by a slowdown in the mining sector, the heavy falls have seen many Perth home owners slip into negative equity.

Angie Zigomanis, associate director of residential property at BIS Oxford Economics, said this meant many people who wanted to move home were not able to do so.

“It means they’re trapped in their dwelling and can’t trade, because it will cost them money to move,” Mr Zigomanis told The New Daily.

The Reserve Bank of Australia flagged concerns around the rising incidence of negative equity in Western Australia and the Northern Territory in its biannual Financial Stability Review earlier this month. 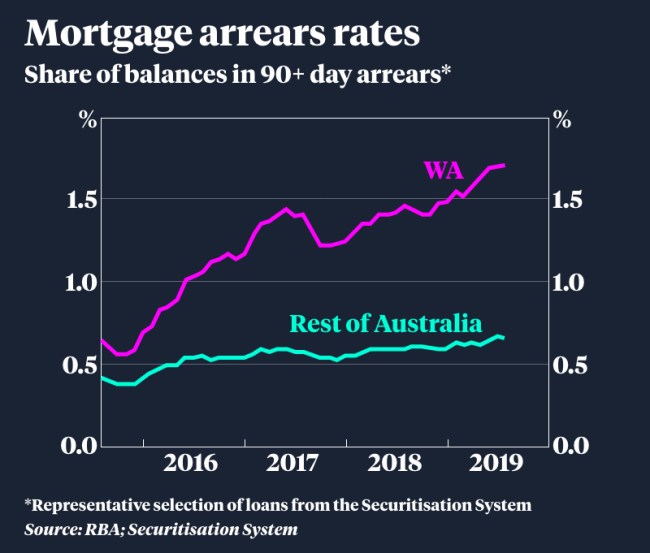 It said a further 10 per cent fall in prices in these states “would see over one-third of these loan balances being associated with negative equity” – a downward trend which, in WA, it attributed to the downturn after the mining boom.

As investment in mining dried up, people lost their jobs and moved out of Perth, the bank said.

This reduced demand for housing and left Perth with an oversupply of stock that had built up during the previous boom, causing prices to plummet.

Green shoots appeared to emerge in March 2019, when WA’s annual population growth hit 1 per cent for the first time since September 2016.

But Mr Zigomanis said the slight uptick wasn’t enough to meet supply and “drive any strong growth in the market”.

“In a downturn, pessimism takes over and it takes a while for things to recover,” he added.

J-Han Ho, a senior lecturer at Curtin University’s School of Economics, Finance and Property, agrees that weak migration and an oversupply of stock are dragging down median prices in Perth.

But he said a range of factors meant property in Perth wasn’t doing as badly as falls in the median property price suggested.

Firstly, Dr Ho said the growing feasibility and popularity of subdivisions was pushing down Perth’s median property price – even though the cost per unit was higher – as it meant selling two cheaper properties on a block instead of a single expensive one.

“The median house price statistic is not perfect,” he said.

“If a lot of properties at the lower distribution sell, then the median house price will come down a lot more because there are fewer transactions at the top end of the market.”

Secondly, an influx of migrants from countries with higher-density urban areas had shifted demand from houses to units, which, again, had pushed down the median house price, as units are smaller and cheaper.

Thirdly, he said, homes in Perth are newer than homes in the eastern states, meaning people want to upgrade less frequently.

“We don’t buy houses once every three or five years … the average house in Australia sells once every 10 years, so there’s that as well,” Dr Ho said.

According to him, the median price data paints a far gloomier picture than reality.

“If you look at the median price from the peak, it’s down more than 20 per cent. But the quality of housing hasn’t changed,” Dr Ho said.

“The blocks are getting slightly smaller, but I wouldn’t say the quality of life (in terms of the housing we choose) has actually got worse.

“In fact, it could actually be improving because people [can find] the housing types in the locations they want to live in.”

And, thanks to the lower prices on offer, now they can afford it.

Why Perth’s housing market is stuck in the doldrums