New research has claimed looser bank lending is the key driver of the house price rebound in Melbourne and Sydney – not the Coalition’s surprise election win.

The research analysed daily changes in property prices – instead of monthly – and tracked them against recent political and economic events.

It showed house prices across the country lifted 0.14 per cent immediately after the Coalition’s election victory, before stagnating for the next three months.

House prices remained subdued even after the Reserve Bank cut interest rates in June and July.

But Grattan’s analysis shows they took off on August 12, once banks had stopped using a hypothetical interest rate of 7 per cent to assess a borrower’s ability to repay their loans, and moved instead towards a buffer of 2.5 per cent above the interest rate on the loan. 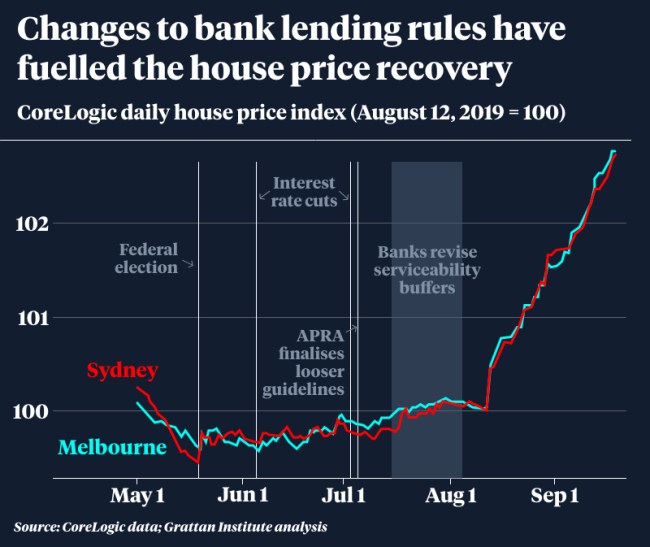 The Australian Prudential Regulation Authority (APRA) finalised the changes to mortgage serviceability rules in July and “banks began applying the new rules to loan applications over late July and early August, which means the first buyers would have received pre-approval and found a property to purchase by mid-August”, the Grattan Institute’s Brendan Coates and Matt Cowgill wrote in their blog post.

“And house prices have since rocketed in Sydney and Melbourne.”

According to CoreLogic data, house prices are now 2 per cent higher than they were at the start of August.

In Sydney and Melbourne, they are on course to increase more than 10 per cent over the next 12 months.

“Past tightening in borrowing capacity had the biggest impact on prices in Sydney and Melbourne, where price-to-income ratios are highest and mortgages are typically larger,” Mr Coates and Mr Cowgill added.

“So it’s no surprise that it’s in those markets that house prices are accelerating again.”

The market turnaround also coincided with Westpac’s responsible lending victory over the Australian Securities and Investments Commission (ASIC) on August 13.

The regulator argued that Westpac’s reliance on a controversial expenditure measure was irresponsible, but the Federal Court disagreed.

BIS modelling estimated owner-occupiers would be able to borrow 11 per cent more money after the removal of APRA’s 7 per cent serviceability buffer, enabling them to bid up prices.

However, Mr Zigomanis argued the Coalition’s surprise election victory would have also played a big part in reversing 18 months of house price declines, by encouraging investors back into the market.

“One of the things about the election is that there were investors who might have otherwise been in the market that sat out, waiting to see who won, and what it would mean for policy on investors and negative gearing,” he told The New Daily.

“So the [Coalition’s election win] brought them back in. But they’re not going to jump back into the market the day after the election, so you’re not necessarily going to see an instant response.” 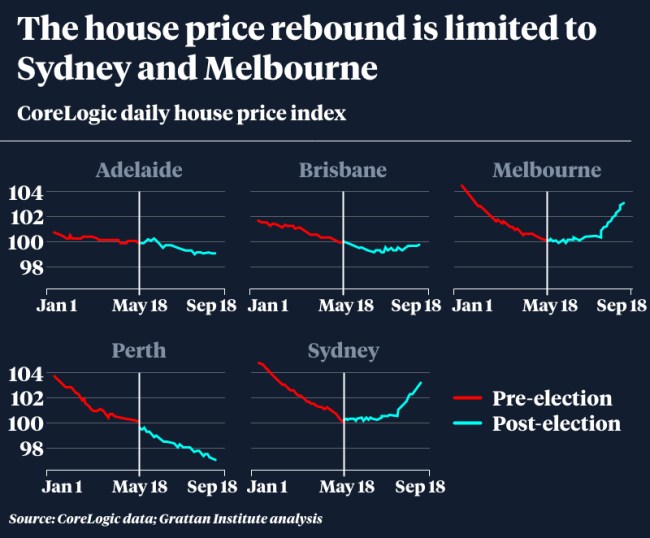 “It takes six weeks to get pre-approval, which takes us to June and July. Then they start looking at properties,” Ms Slack-Smith told The New Daily.

“Then July and August, we start to see people exchanging. Then August, September, October, [based on] six-week settlement contracts, we start seeing increased volumes.”

However, Hero Broker founder Clint Howen said while his company experienced a three-fold increase in inquiries after the federal election, “the biggest thing that drives people into the market, over the long term, is that feeling of being able to get a loan”.

And Mr Coates, program director of Household Finances at the Grattan Institute, told The New Daily “you’d have expected people to update their expectations pretty quickly” if the election was weighing on their minds.

“If it was Labor’s policies around negative gearing and capital gains taxes, then they had plenty of opportunity to get involved,” Mr Coates said.

“What’s striking is that, all of a sudden, when APRA relaxes the serviceability buffer, we see an almost-immediate impact on prices, and now prices have been growing for a good six weeks.

“To me, that looks like the election itself did not have that big an impact on prices.”