The National Rental Affordability Scheme (NRAS), which was established by Mr Rudd in 2008 and began winding down last year, aimed to increase the supply of affordable housing by paying developers and housing organisations to lease units for below-market rent.

But, according to Grattan, the scheme failed to boost supply and was little more than a developer handout.

Initially set at $8000 a year, the subsidy developers received eventually rose to $11,000 a year, which is much greater than the 20 per cent rental discount offered to tenants.

Grattan researchers said the discount should have only cost $3692 a year.

“The leftover value of the subsidy – about $7000 a year – was essentially a windfall gain for developers,” researchers wrote.

“We estimate that NRAS provided windfall gains to private developers of at least $1 billion, or roughly one-third of [the] total cost of the scheme.” 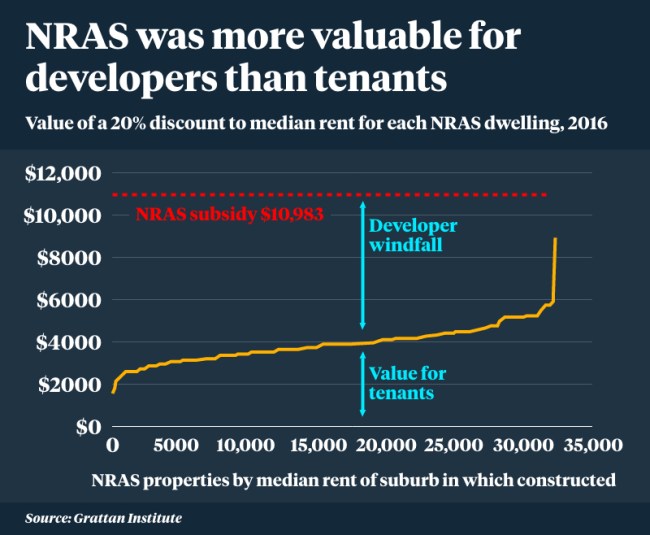 Developers and community housing organisations were able to increase these gains by building smaller dwellings in cheaper areas, as governments paid the same annual subsidy regardless of the size and location of the apartments.

“Not surprisingly, the scheme ultimately funded a lot of small, cheap-to-build apartments,” the researchers wrote.

Not only did the scheme cost taxpayers more than it should have, loose eligibility criteria meant it didn’t help those most in need, the researchers argued. 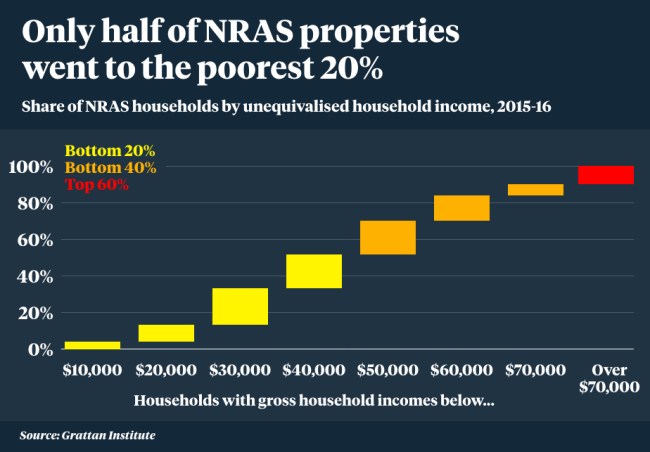 This meant about half of all Australian households that rent could have qualified to live in an NRAS-subsidised home.

A more effective government strategy would be to “build more social, rather than affordable housing, and target it at people at serious risk of becoming homeless”.

“Because someone who is at a very serious risk of homelessness will typically need a much larger subsidy – the kind of subsidy that social housing is going to give them,” Grattan researcher Brendan Coates told The New Daily.

Social housing tenants are usually required to pay rent equal to 30 per cent of their income, rather than a fixed amount, which means the largest subsidies are given to the tenants with the lowest incomes.

Academics and researchers have repeatedly argued that direct government investment in social housing is more effective at improving affordability than developer subsidies.

Like Grattan, the University of Sydney’s Peter Phibbs said reviving the Social Housing Initiative, another Rudd-era scheme, would provide housing to those who needed it most, while giving the flagging economy a much-needed boost.

“Given the state of the economy at the moment, something like a social housing infrastructure scheme would be a useful way of helping a lot of people in bad housing circumstances, and it would also be very good at kickstarting the residential construction sector, which is in a fairly deep hole at the moment,” Professor Phibbs said.

“Seeing Josh Frydenberg and the Prime Minster talk up the economy reminds me of the Monty Python skit with the parrot – ‘It’s not dead, it’s resting’. Seriously pal, it’s dead.”

Robert Pradolin, director of not-for-profit Housing for All Australians, said Grattan was right to criticise NRAS for being too expensive, though not for failing to boost supply, which he said it did achieve.

As a former Frasers Property manager who has built apartments under the NRAS initiative, Mr Pradolin also said the windfall gains ended up in the pockets of investors, not developers.

And he insisted a revamped NRAS-style initiative shouldn’t be taken off the table, because it could improve affordability if the subsidy was smaller and took into account the size and location of the dwellings built.

“I do, however, agree that the low-income portion wasn’t targeted, because NRAS was always intended for key workers,” Mr Pradolin said.

“It was never, from my understanding and all the people I’ve spoken to, intended to target the social housing, low-income people that Grattan is referring to.

“That’s a job for government.”