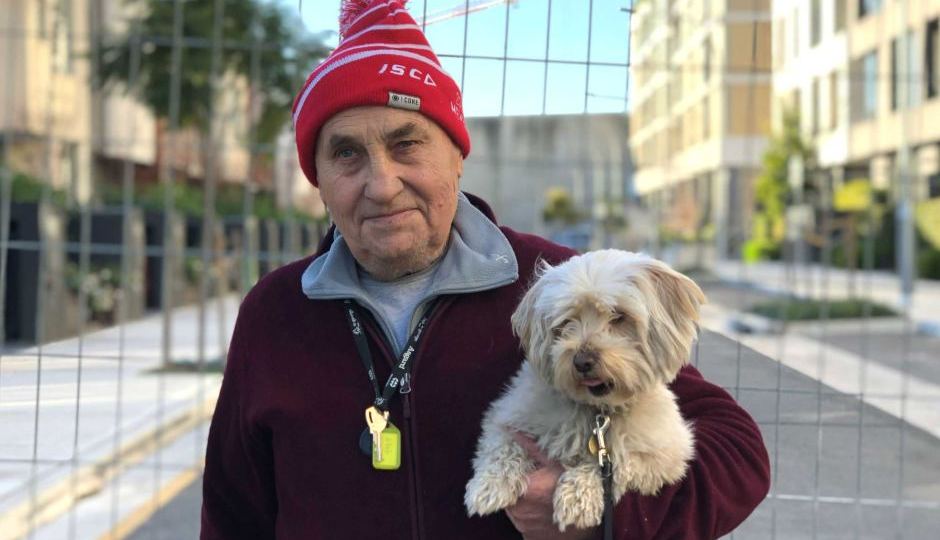 An owner of a unit in an inner-city Sydney apartment tower abandoned over toxic land concerns says he has “no power” after buying a $1 million home.

Nick Rehac, who is on a pension, bought his home in the $46.5 million “Sugarcube” apartment development in the inner-west suburb of Erskineville more than a year ago.

But he is yet to live in his home, after the City of Sydney refused to allow owners to move in over concerns the developer has not cleaned up toxic land underneath it.

Neighbours living next door to the Sugarcube development have also raised concerns over potential contamination of their groundwater, with one telling the ABC she has been disappointed over the lack of information available.

The Sugarcube tower is the fourth Sydney apartment block to be abandoned over safety issues, following the Opal Tower in December, Mascot Towers last month and a smaller apartment development in Zetland, which was abandoned late last year.

Sugarcube is not known to have any structural defects.

The revelation also comes a day after an emergency meeting of state building ministers in Sydney agreed to create a “nationally consistent approach” to reforming the building industry.

Speaking behind a fence that blocks off his apartment, Mr Rehac said he was not even allowed to walk on the footpath outside his home.

“I have no rights, I have nothing,” Mr Rehac said.

“I’m not allowed to stay here.”

The Sugarcube’s 109 apartments — as well as 18 terraces in the same development — were built on an industrial estate in Erskineville.

Construction finished in May 2018, according to documents seen by the ABC.

But according to the City of Sydney, the development approval included several conditions “requiring remediation” including “contaminated groundwater and detections of heavy metals, hydrocarbons and asbestos”.

“The contaminants are believed to be associated with the former industrial use of the site involving manufacturing activities,” a City of Sydney spokesperson said.

The spokesperson said the developer, Golden Rain Development, had requested to address contamination on site through an environmental management plan, which would require ongoing monitoring.

The City of Sydney said it had received further test results from the developer and was reviewing this material.

Thinking about buying a new apartment? Don’t do it

The listings to purchase or rent one of the apartments — posted on sites in Sydney, China and Indonesia — describe them as “New York-style” homes located in one of the “most highly-sought cosmopolitan villages” in the state.

Weekly rental rates were listed almost $1,000 a week while single-bedroom apartments were being advertised from $690,000.

Mr Rehac, who bought the apartment after downsizing to be closer to his family, said he was speaking with the developer through a solicitor.

“They took the money.”

Pensioner left with ‘nothing’ after fourth Sydney tower abandoned