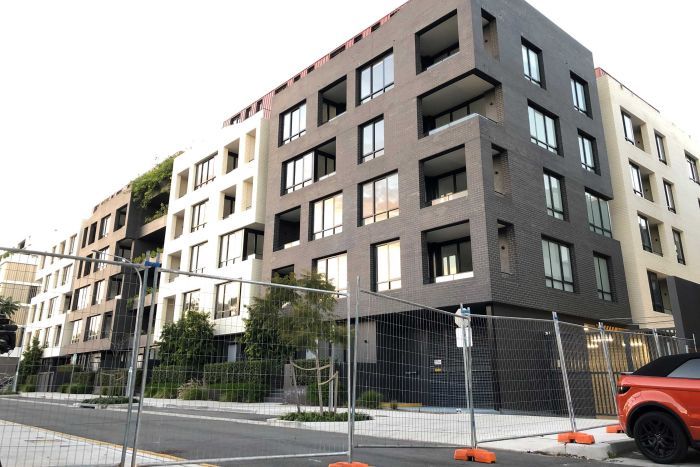 More than 100 homeowners have been told they cannot move into their newly constructed units in Erskineville, in Sydney’s inner south-west, amid concerns the apartment block was built on contaminated ground.

The City of Sydney said in a statement the development approval for Erskineville’s Sugarcube Apartments and Honeycomb Terraces was conditional on the developer resolving issues about “heavy metals, hydrocarbons and asbestos” in the ground and “contaminated groundwater”.

But developer Golden Rain Development failed to comply with the approval – and the building remains empty, more than 12 months after construction was completed, the Sydney Morning Herald revealed on Friday.

“We understand this is a most frustrating situation for all terrace and apartment owners connected to the Sugarcube Apartments and Honeycomb Terraces,” a City of Sydney spokesperson said.

The spokesperson said Golden Rain Development had asked to resolve the contamination on site through an environmental management plan that would require ongoing monitoring.

In response, the City of Sydney asked for a formal submission of the  plan, further testing, and potentially further remedial works.

That testing has been submitted to the council, which is reviewing it. But the spokesperson said the the local government authority would likely require more information from the developer before declaring the site fit for occupancy.

Builders Collective of Australia president Phil Dwyer told The New Daily that the news was no surprise.

“It’s just another one of many more to come,” he said.

“We’re going to see more building failures, because, particularly in the past five years, we’ve noticed an enormous lack of skills in the building industry, with builders and people operating in our space who don’t have the skills needed to be there.”

Mr Dwyer’s comments come amid a period of heightened scrutiny into building standards, with state, territory and federal building ministers meeting on Thursday to discuss how best to resolve widespread industry failings.

Following that meeting, the ministers announced they would adopt a nationally consistent approach to implementing recommendations in the watershed Shergold-Weir report.

Released in April 2018, the report made numerous recommendations, focusing on registering and training practitioners, fire regulations and the role and integrity of building surveyors and regulators.

Mr Dwyer welcomed that decision but said governments had made similar promises in the past.

“If we did have the Commonwealth putting together a code of conduct for the states and territories, that could only be a good thing,” he said.

“We need harmony across the states and territories and across the building industry … but [governments] have been saying that for a long time, using spin and tokenism to get themselves out of hotspots whenever media ramps up.”

Fourth abandoned tower is ‘one of many more to come’