China has dominated the tally of super tall skyscrapers built in 2018. Photo: AAP

One country continues to tower over the rest of the world when it comes to the construction of tall buildings, with China dwarfing the competition thanks to a staggering 88 completions of buildings 200 metres or higher in 2018.

Research by the Council on Tall Buildings and Urban Habitat (CTBUH) found 143 buildings of 200 metres or more were erected around the world in 2018, down by four from the all-time record of 147 in 2017. 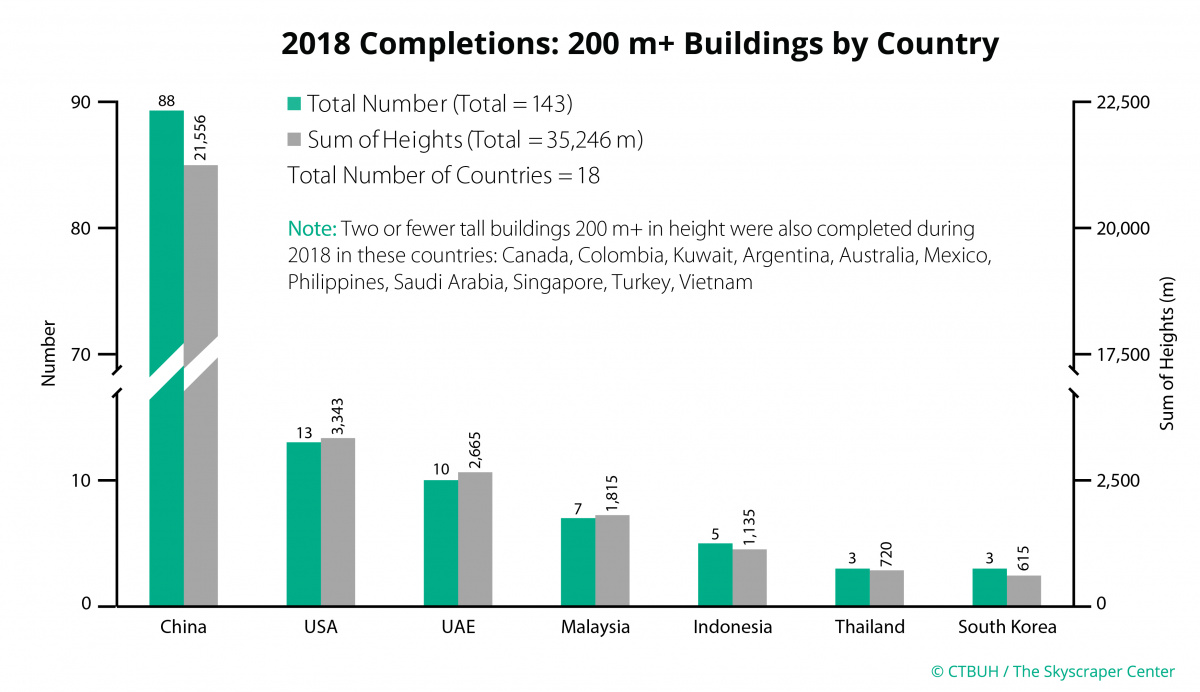 The tally included 18 “supertalls” (buildings at least 300 metres tall), the largest number ever built in a year.

The 88 skyscrapers completed by China this year is a record for the country, vaulting over the 80 it constructed in 2017.

The US came in a distant second place, with 13 tall buildings erected in 2018, followed by the United Arab Emirates with 10, Malaysia with seven, Indonesia with five, and Thailand and South Korea with three each. 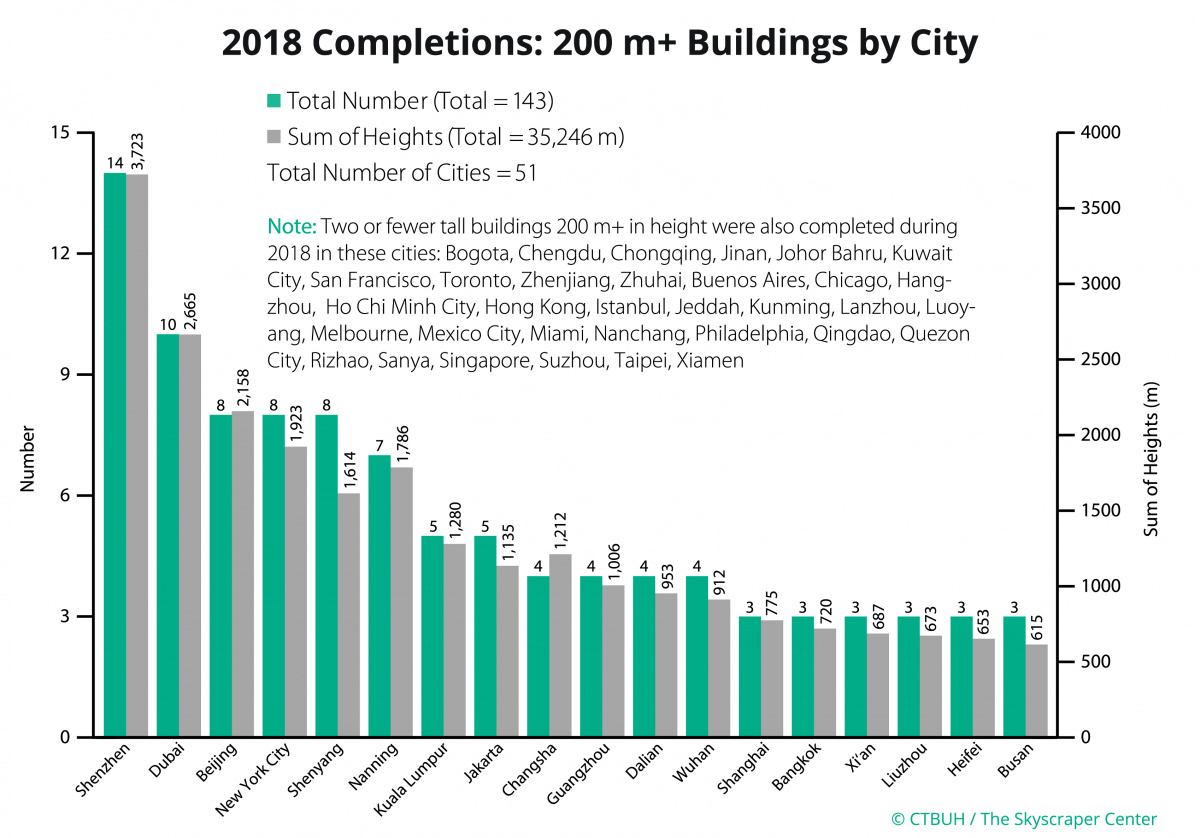 China’s tally represents 61.5 per cent of the global total of tall buildings completed this year.

The south-eastern city of Shenzhen, which boasts a population of more than 12 million and connects mainland China to Hong Kong, saw 14 skyscrapers erected.

It was the largest number of 200-metre plus completions for any city for the third year in a row. 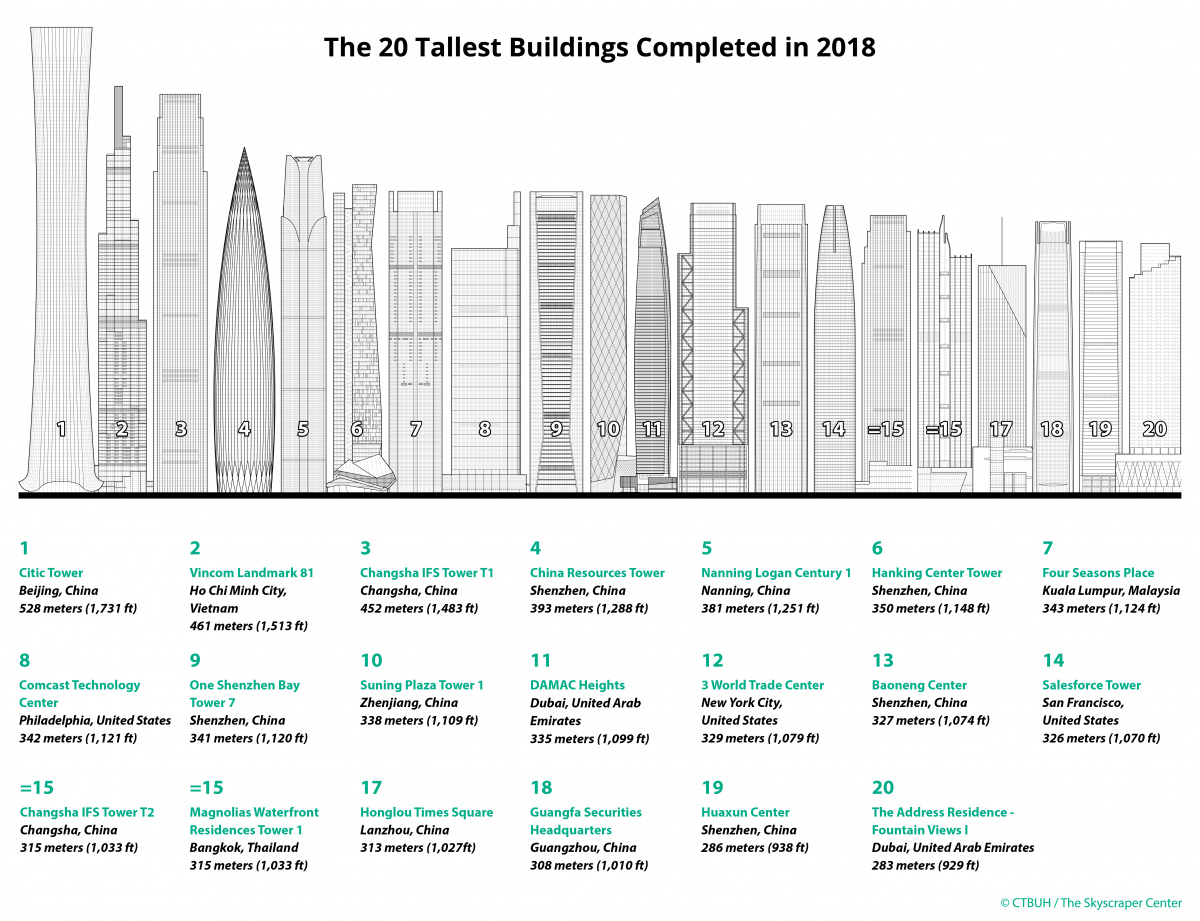 The tallest building completed in 2018 was, for the fourth year in a row, also built in China: the 528-metre Citic Tower in Beijing took out the top gong.

The soaring skyscraper didn’t come close to snatching the crown of the world’s tallest building, however, which belongs to Dubai’s 828-metre tall Burj Khalifa, built in 2010. 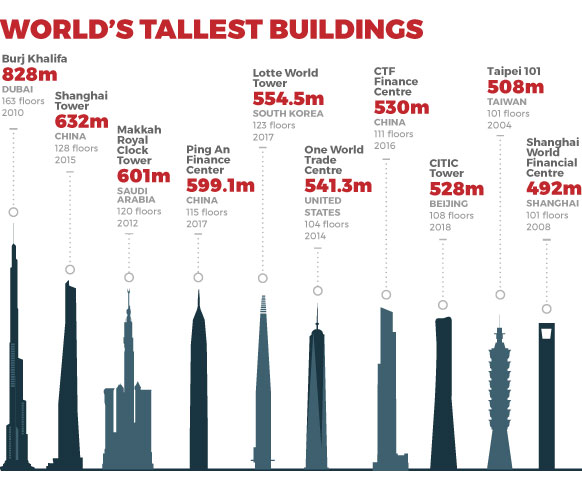 “The region typically produces 200-metre-plus buildings at this frequency, however, and this should not be taken as a sign that tall and urban projects are on the wane generally,” the CTBUH report said.

“In fact, numerous projects are currently underway that will be finishing in early 2019. For example, Aurora Melbourne Central (270 metres) is already partially occupied by tenants.”

Pride and easy money behind the rise of tall buildings

The extraordinary growth of tall buildings in China can be attributed to three key factors, according to Dave Platter, communications director of Chinese property website Juwai.

They are: pride, easy money, and agglomeration.

“The easiest one to explain is pride. As a nation, China is very proud of what it’s accomplished. A big beautiful building is one way of celebrating that,” Mr Platter said.

Similarly, for tenants, an address in a prestigious skyscraper is a status symbol and a way to mark personal success.

“The government wants banks to lend to spur the economy, and building stimulates the economy,” he said.

Skyscrapers are also on the rise in China thanks to an “agglomeration effect” created by the country’s role as the world’s largest manufacturer and biggest exporter combined with huge, and growing, population and powerhouse economy.

“Businesses in places like that prefer to cluster together,” Mr Platter said.

“One business’ customers are another business’ employees. Everything works better when you have a denser city.”