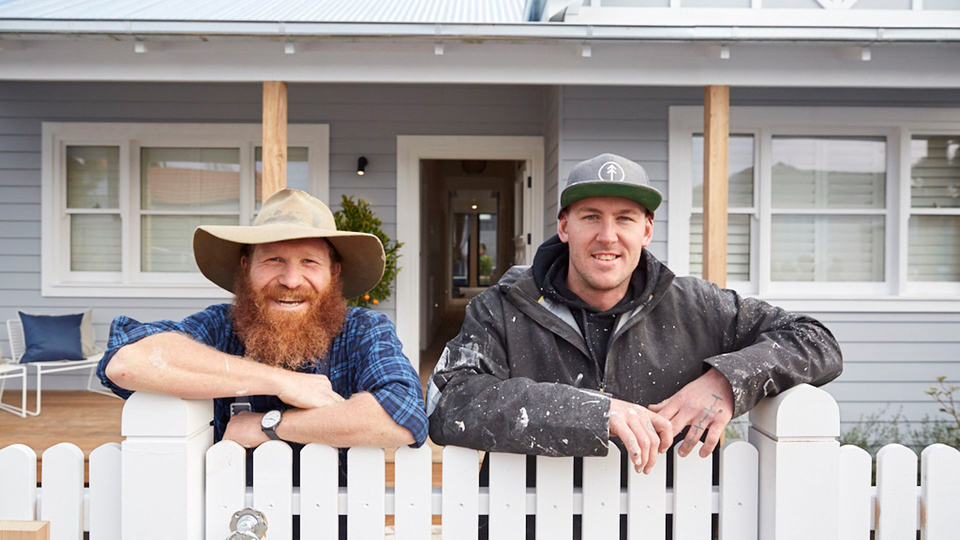 The best mates didn't win the show, but won over plenty of fans. Photo: Nine

The Elsternwick home renovated by fan favourites Sticks and Wombat in the last season of Channel Nine’s The Block has sold shortly after its weekend auction.

Listed with initial $2.65 million to $2.75 million price hopes, it fetched $2.83 million through Michael Paproth and Peter Kakos at The Agency.

There were two bidders and no television cameras when the five-bedroom, four-bathroom home went to its onsite Sunday afternoon auction.

Passed in at $2.66 million, it sold soon after to a family from the inner south-eastern suburbs.

It was less than a year ago that 46B Regent Street sold for $2.65 million amid The Block‘s typical finale frenzy, in October.

Taking home a profit of $130,000, it had been built with an extensive use of reclaimed timber.

The New South Wales contestants had been judged as having the best hallway, front facade and garden.

Canberra was the standout capital city at weekend auctions with the strongest preliminary clearance rate of 68.1 per cent, according to CoreLogic.

Only 45.1 per cent of Brisbane homes sold, including the nation’s cheapest weekend result.

It was a $150,000 home at 14 Akebia Street, Russell Island which was sold under mortgagee instruction. Russell Island is the biggest of the Southern Moreton Bay Islands, situated between the mainland and North Stradbroke Island.

The combined capital cities saw an increase in the number of homes taken to auction to 1985 auctions held, up from 1916 auctions.

The preliminary auction clearance of 55 per cent was lower than the previous week’s 55.3 per cent final clearance rate.

“It will be interesting to see how this revises as final results are collected.”

He added: “So far the spring selling season has seen a lower volume of auctions take place each week relative to the same period last year, demonstrating the reluctance within a softening market.”

There were 991 Melbourne homes taken to auction this week, down on one year ago’s much higher 1265 homes.

Melbourne posted a preliminary clearance rate of 57.2 per cent.

A Kew home was Melbourne’s dearest. The renovated 1890s Victorian house at 2 Belmont Avenue offering with a price guide of $3.5 million to $3.85 million sold to a Kew downsizer for $3.83 million.

In Sydney, 52.6 per cent of properties sold from the 665 homes taken to market.

At the same time last year, there were 916 Sydney homes taken to auction with 64.2 per cent being sold.

Sydney has the nation’s top sale which was secured in a pre-auction offer for 15 Kareelah Road, Hunters Hill.

The five bedroom non-riverfront 1871 sandstone residence Doonbah, set on the peninsula with views over the Parramatta River back to the city, fetched $5.61 million through Tracey Dixon at McGrath.