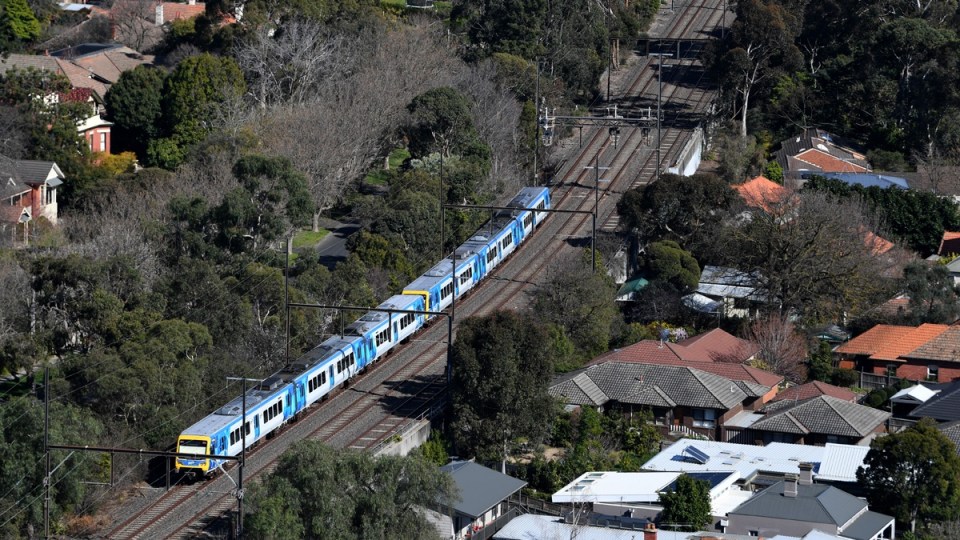 Property prices in the Melbourne suburb of Mernda have skyrocketed after the arrival of a train station. Photo: AAP

The ‘train station rule’ is one that savvy property buyers have long lived by, and eagle-eyed investors will be paying close attention to suburbs set to welcome new rail stops in coming years.

The Andrews government announced this week in Victoria what has been billed as the biggest transport project in the nation’s history.

The proposed $50 billion suburban rail loop features would see 12 new underground rail stops added around Melbourne, and commuters aren’t the only ones likely to benefit.

Put simply, data suggests buying property in close proximity to a current or future train station – such as those planned in Victoria – can pay off big time.

“It is a long-held tenet of land economics that access to transport always produces an increase in land value,” EG Urban Planning director Shane Geha said.

“This is because the utility value of a parcel of land is enhanced with greater accessibility.”

While this tenet holds true for all modes of transport, the value effect is “particularly magnified” for new rail stops.

According to Dr Geha, buyers who purchase property in areas selected for future infrastructure projects often benefit from “massive” increases in value over time.

“This is because new infrastructure, coupled with new zoning and better planning, greatly increased the ability of the land to produce income or capital, or both,” he said.

Patience and forward planning is required, though, as it can take a decade or more for increased value to be realised depending on the infrastructure project.

The study analysed Sydney rail projects between 2000 and 2014 and found that houses within 400 metres of a train station experienced a 4.5 per cent increase in value. 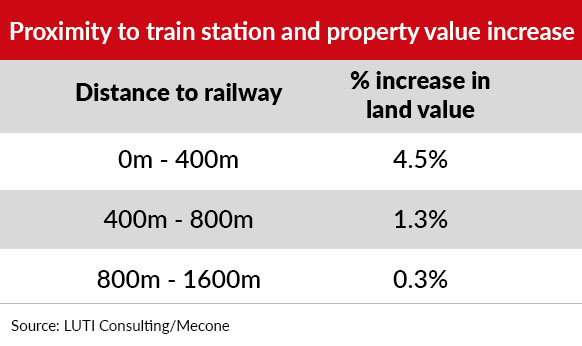 The value uplift lessened as the distance from the station increased, with houses 400 to 800 metres away attracting a 1.3 per cent price bump, and those 800 to 1600 metres away rising in value by only 0.3 per cent.

According to Luti Consulting director James McIntosh, the value increases are driven by two key factors.

Firstly, owning land or property near a rail station “increases its redevelopment potential” as the land is likely to be rezoned or upzoned to allow for increased housing density in surrounding areas.

Developers looking to capitalise on this show a greater “willingness to pay” higher sums to acquire land close to the station.

Secondly, commuters in big cities want to cut the time they spend travelling to and from work, and are willing to pay more for properties within walking distance to trains.

“If you buy a property near a new piece of rail or a forthcoming station there will be increased demand for the property from people looking to live there because of travel time savings,” Dr McIntosh said.

“There’s an exchange between travel time and housing costs. It’s a trade off.”

A look at property prices in areas that have recently added new train stations further bears this out.

On Monday, the outer-Melbourne suburb of Mernda opened its much-anticipated new train station.

Real Estate Institute of Victoria data shows that Mernda enjoyed the largest annual increase in its median house price in the state between June 30, 2017 and June 30, 2018.

Prices rose by a staggering 24.9 per cent over the past year, with the “massive” increase “no doubt attributable” to the new station, according to REIV CEO Gail King. 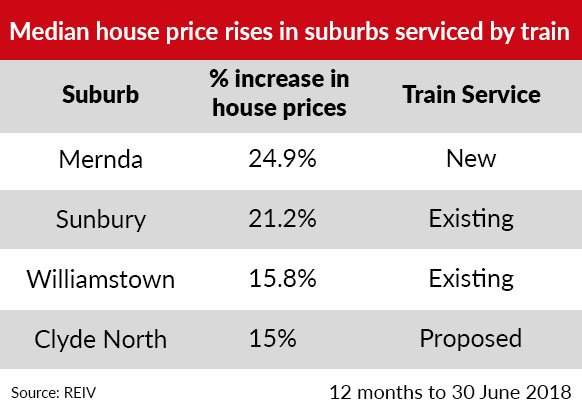 Following Mernda, Sunbury and Williamstown recorded the next highest levels of annual growth in Melbourne: both are serviced by train stations.

Clyde North came next in the annual growth suburbs according to REIV data, and it is “no coincidence” the Victorian government and opposition have signalled their intentions to establish a railway station there, Ms King said.

“Proximity to public transport is one of the key factors that purchasers look for in today’s property market,” Ms King said.

“As congestion worsens, people become more environmentally conscious and services improve. There is no doubt that being close to a railway station has a favourable impact on the value of a home.”

Railway to riches: The value of buying near a train station