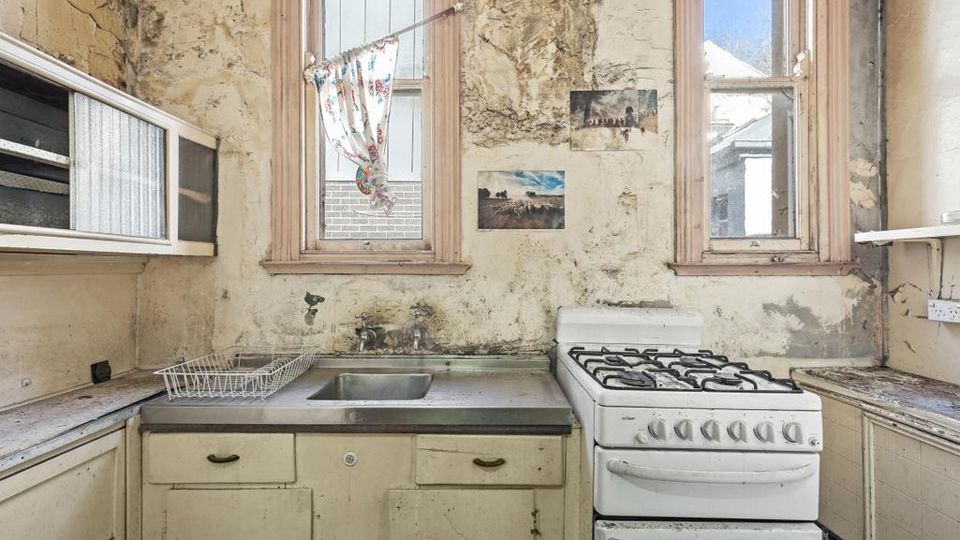 The Erskineville property is a knockdown, for sure. Photo: Ray White

Four bidders triggered a $1.16 million sale price for an inner Sydney dump on the weekend.

The Erskineville blank canvas at 48 Charles Street was on the market for the first time in 30 years.

It attracted an opening bid of $900,000, below its $1 million pre-auction price guidance.

With side and rear lane access, there was potential to build a second level, as neighbouring homes have done.

The Daily Telegraph recently suggested there was a dwindling supply of inner-city fixer uppers.

But there is another opportunity just a few doors further along.

The home at 86 Charles Street goes to auction on September 1.

“Hip village cafes, delicious dining spots and city trains are within a stone’s throw of its door,” the marketing says.

In Melbourne, one of Fitzroy’s last remaining unrenovated terraces, albeit habitable, sold after two bidders sought out the renovation opportunity.

Broxbourne House, at 427 George Street, has been continually occupied by one family for 100 years.

Bidding kicked off with a $1.05 million vendor bid with Domain reporting the home sold for $1.15 million to a couple intending to relocate from an apartment in Collingwood.

Its price guidance had been $1.05 million to $1.15 million through Nelson Alexander.

The five-bedroom, three-bathroom house was sold after eight days on the market with $5 million to $5.5 million price guidance through McGrath.

There were 572 auctions held in Sydney, the busiest week since July 2018, returning a preliminary clearance rate of 56.5 per cent.

In comparison, there were 458 auctions held over the previous week and the final auction clearance rate was 53.8 per cent.

One year ago, 720 auctions were held and the Sydney clearance rate came in at 67.8 per cent.

The Brighton home was tipped to sell for between $3.3 million and $3.63 million by its listing agency Buxton.

The once grand four bedroom Californian bungalow sits on a 920-square-metre block.

One year ago, the clearance rate was a stronger 75.6 per cent across 1001 auctions.

Brisbane had the highest volume of auctions in the other capital cities with 103 homes going under the hammer. They returned a strong preliminary clearance rate of 60 per cent.

There were 1692 homes taken to auction across the capital cities this weekend, returning a preliminary auction clearance rate of 56.7 per cent, making it the busiest week for auctions since June 2018.

Last week, 1402 auctions were held and the final clearance rate came in at 54.9 per cent.

Over the same week last year, auction volumes were higher with 2064 homes going under the hammer across the combined capital cities and the clearance rate was a stronger 69.8 per cent, CoreLogic noted.

Units outperformed houses with 58.5 per cent of units selling at auction, while 56 per cent of houses sold across the combined capital cities.