July marks the first anniversary of a federal government scheme designed to help first-home buyers save for a deposit. But critics argue the incentive merely pushes up prices in affordable areas.

Unveiled by Treasurer Scott Morrison in the 2017 budget, the First Home Super Saver scheme (FHSS) was a core part of the government’s “comprehensive approach” to easing Australia’s housing affordability problem.

A year on, is the FHSS really helping cash-strapped renters in the country’s most expensive cities transition to their own home?

What is the FHSS?

The FHSS scheme allows prospective first-home buyers to make voluntary contributions of $15,000 per financial year, up to a maximum total of $30,000, into their superannuation fund account. The contributions are taxed at a reduced rate, and only released for the purpose of buying a first home.

From July 1, the first adopters of the scheme will be able to withdraw voluntary contributions of up to $15,000 to put towards a home deposit.

Treasury initially predicted that the FHSA would allow first-home buyers to save $6.5 billion by 2012. In reality, only $500 million had been saved by 2014. Then-treasurer Joe Hockey scrapped the scheme, citing a lack of take-up.

The FHSS allows first-home buyers to save just a third of the $90,000 possible under the FHSA scheme. It’s an amount that, according to Grattan Institute policy expert Brendan Coates, “won’t materially help many people”.

The government itself “doubts the scheme will be popular”, Mr Coates argues, with treasury forecasts showing it will cost just $70 million in the 2020-21 year.

The Australian dream of owning a home may be fading fast, with home ownership levels falling rapidly.

While two-thirds of young people aged 25-34 said that owning a home was an important part of Australian life, according to a 2017 survey by the Australian National University, more than half of those surveyed were “very concerned” that younger generations wouldn’t be able to afford a house.

“The fall in ownership is not the result of changing preferences. Owning a home remains a core aspiration for most Australians,” Mr Coates says.

“Home ownership now depends on income much more than in the past.”

In 1981 home ownership rates were relatively equal among 25-34-year-olds of all income levels. Back then there was a “broadly equal chance” of owning your own home regardless of income, Mr Coates said. 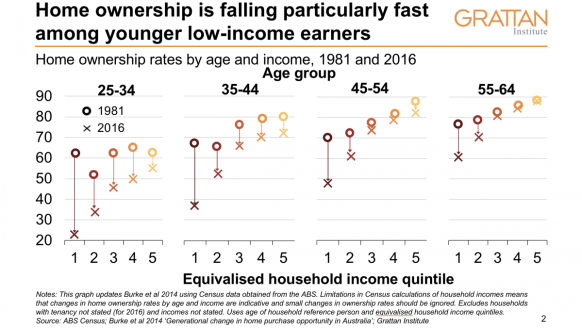 The problem of housing affordability isn’t confined to the young, either, with home ownership rates also declining among poorer households in older age groups.

“Even middle-age Australians are finding it harder to own a home than in the past, suggesting that most of the fall in home ownership is due to higher dwelling prices rather than changing preferences for home-ownership among the young,” Mr Coates says.

Pushing up prices in affordable areas

Rather than making houses more affordable for low-income earners already struggling to afford rent, the FHSS could fuel rising prices in affordable areas.

“Either no one takes up the scheme and it doesn’t do much, or everyone does and it pushes up house prices,” Mr Coates says.

The current housing market appears to bear this out, with home values in areas favoured by first-home buyers still rising, even as prices in higher-value suburbs cool.

In July last year, the Victoria and New South Wales’ state governments introduced stamp duty concessions for first-home buyers. The incentives resulted in a surge of first-home buyer commitments between July and November 2017, the ABS reported.

But the benefits of the stimulus already appear be wearing off.

“Affordability constraints are still there, there are still high dwelling-price- to-income ratios in Sydney and Melbourne.

“It defeats the whole purpose of incentivising home buyers to get to the market if they’re simply paying more for their properties than six months ago.”

According to Brendan Coates, the FHSS is likely to have a similar effect.

Moving house? Five tips to get rid of the clutter
Today's Stories