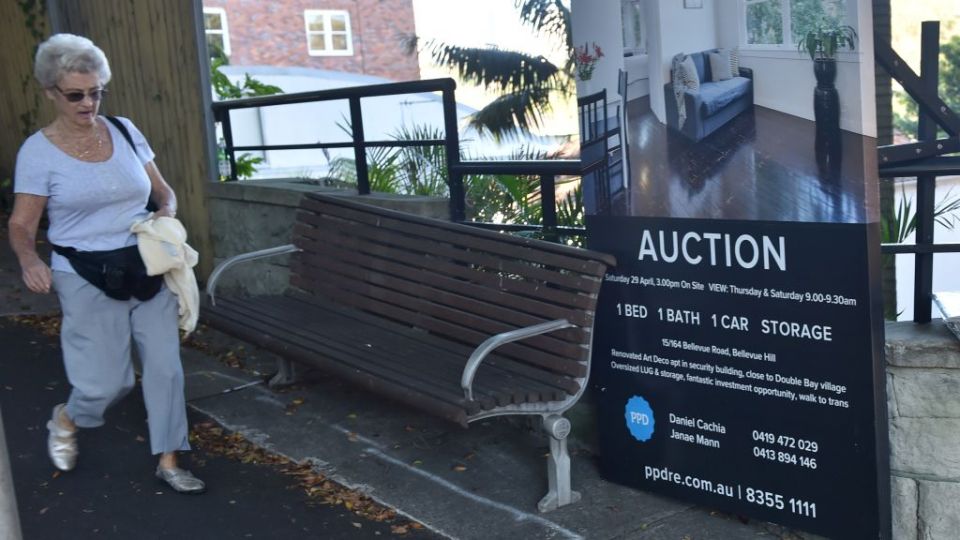 House prices in Sydney fell 1.3 per cent in the quarter – the biggest fall since the December quarter of 2015.

Australia’s property boom appears to be over, with Sydney’s market leading the fall, according to the Australian Bureau of Statistics’ Residential Property Price Index.

Average home prices across all eight capitals fell 0.2 per cent in the September quarter – the first decline since the March quarter of 2016 –  according to the figures released on Tuesday, which one economist said confirmed the start of a longer-term price correction.

The Sydney market made up the lion’s share of the decline with unit prices falling 1.4 per cent in the quarter – the biggest quarterly drop in almost six years.

House prices in Sydney also fell 1.3 per cent in the quarter – the biggest fall in the city’s prices since the December quarter of 2015.

Average dwelling prices also dropped in Perth (-1 per cent), Darwin (-2.6 per cent) and Canberra (-0.2 per cent) in the September quarter, according to seasonally adjusted data.

However, the news wasn’t quite as encouraging for anyone looking for a home in Melbourne, Brisbane, Adelaide and Hobart.

Home values in Melbourne were up 1.1 per cent, and 0.7 per cent in both Brisbane and Adelaide, while Hobart was the stand-out capital city, increasing 3.4 per cent in the quarter.

Despite the fall in the September quarter, average capital city prices were still up 8.3 per cent for the year when compared with prices in September 2016.

Annually, Sydney prices increased by 9.4 per cent while Melbourne values were up 13.2 per cent for the year.

But again, Hobart posted the strongest gains in the past year, up 13.8 per cent.

Darwin was the weakest city, with prices down 6.3 per cent, while prices in Perth were down 2.4 per cent. 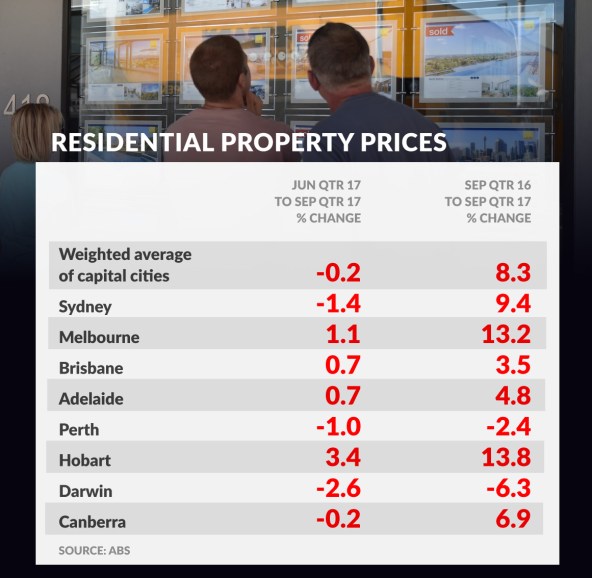 AMP chief economist Shane Oliver said the falls were not unexpected after other bodies’ figures showed drops in October and November.

“This confirms that the heat has come out of the Australian market and is consistent with drops in auction clearance rates,” Mr Oliver said.

“And this is all a reflection of measures taken by APRA earlier in the year to slow lending to investors.”

Mr Oliver predicted the September quarter falls marked the start of a period of softening in prices that could extend for two years, at least in Sydney and Melbourne.

“Prices will probably be off another 5 per cent in Sydney in 2018 and Melbourne will follow that,” he said. “We could be looking at a further 5 to 10 per cent fall in Sydney and Melbourne.”

However, a property “crash” was highly unlikely.

“To get a collapse, we would require some shock to the economy, much higher unemployment or much higher interest rates, which are unlikely.”

Tom Kennedy, an economist with investment bank JP Morgan, said while the bank had expected some softening in prices, it had forecast a slight increase in the third quarter before “an outright drop in prices into year-end”.

“Our expectation is for national dwelling price inflation to continue moderating in 2018 as macro-prudential measures weigh on lending activity and the record number of dwellings currently under-construction are completed, adding to supply,” Mr Kennedy said in a statement.