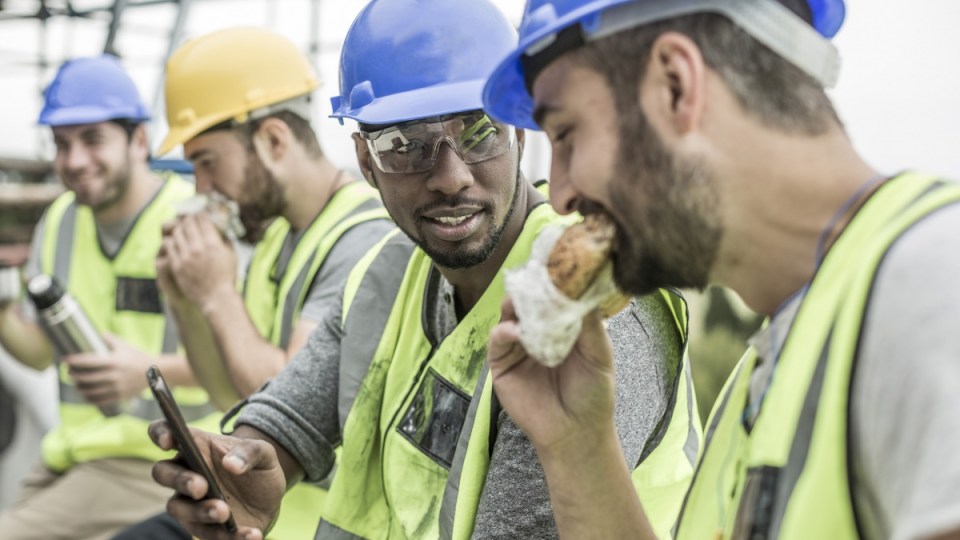 Tradies are now more likely to bring their own lunch than buy a pie. Photo: Getty

There’s a new breed of tradies taking over building sites, with builder’s cracks and wolf whistles being traded for health-conscious habits and swearing kept to a minimum.

I never thought I would lament the demise of the wolf whistle. I know it’s terribly un-PC to admit, but where once a chorus of pesky attention would ensue on my mere passing a building site, now I pass in total silence or a respectful nod at best.

According to a recent survey of 1700 tradies and their customers by ServiceSeeking.com.au, the new breed of tradie is smoking less, turns up on time and bringing a healthy lunch from home.

Which is great because, unless you’ve been living in a shipping container on the docks, you would have noticed that our major cities are quite simply awash with tradies right now.

Every thoroughfare, level crossing or suburban street seems to have utes parked with two wheels up off the curb carving up your nature strip. So there is ample opportunity to get things very wrong, but thankfully the reverse is happening.

Now, before we get too excited, I still believe our hard-working lads of the lathe still have a long way to go – particularly in the road-rage department at school pick-up time.

But credit where credit is due. If the figures are to be believed, then we are indeed experiencing a social campaign the likes of which we haven’t seen since beer cans were banned from the MCG.

Gone is the sacred smoko, the fighting your way through a narcotic haze on a major thoroughfare as you try to get to the post office before lunch.

They even turn up on time to give quotes and start work.

Just recently I even heard the dulcet tones of Jon Faine of Melbourne’s ABC radio ringing out across the site of a house extension – it was in Balwyn, but even so for me it was a first.

Building contractor Kelvin Wood says: “The new breed of 20 to 30-year-old tradies are much nicer men and they understand the need to be polite in order to get referred business.

“Just simple things like not yelling on a building site, keeping the radio at a respectful volume, keeping the swearing to a minimum and taking shoes off if we need to go inside a property, it’s all common sense these days.”

And it seems their customers agree. More than 1000 customers were asked if the conventional stereotypes such as smokos, bad BO, mess, and wolf whistling still applied.

Encouragingly, less than 10 per cent of respondents think tradies are guilty as charged while 55 per cent of people who had hired a tradie say that none of those traditional stereotypes apply.

And the survey says

Tradies turn up on time