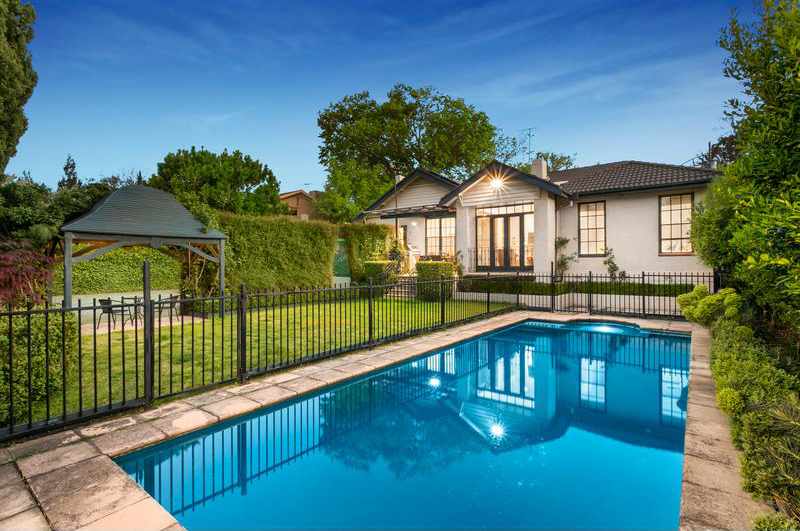 Buyers are spoilt for choice when it comes to entertaining with a swimming pool, gym, sauna and tennis court. Photo: RT Edgar

All mainland capital city auction clearance rates have eased to below 70 per cent under the weight of heightened spring listings coinciding with banking lending hesitancy.

Melbourne still ranks as the strongest market, but at a 69.6 per cent weekend success rate. The same time last year Melbourne’s vendors were securing a 79 per cent success rate under the hammer.

A Toorak home was among the many passed-in offerings around the country when bidding stopped at $12.2 million.

Another Toorak house was passed in on a $6.5 million vendor bid.

Melbourne’s top result was a $4.125 million sale in Canterbury, a Stonehaven-designed and built split-level contemporary residence.

A ground floor executive apartment at George Town in regional Tasmania fetched $3.125 million. It was a three-bedroom 175 sqm apartment on the Tamar on the north coast of Tasmania.

CoreLogic advised it was the third-busiest weekend for auctions so far this year, returning a national preliminary clearance rate of 65.4 per cent across 3335 auctions.

There was a 62.8 per cent success rate across 2907 auctions last week.

“This time last year, 2987 homes were taken to auction and a clearance rate of 74.4 per cent was recorded,” CoreLogic auction analyst Kevin Brogan said.

The final clearance rate has remained below 65 per cent for the last four weeks.

He noted one of the biggest contributors to the softer auction market conditions is Sydney, where the final clearance rate has remained below 60 per cent since the last week of October, while Melbourne has slipped below 70 per cent for the second week in a row.

Melbourne was host to 1717 auctions this week and a preliminary clearance rate of 69.6 per cent was recorded, making it the second-busiest week for auctions in Melbourne this year.

Last week saw the final clearance rate drop to 69.2 per cent across 1296 auctions, the lowest clearance rate the city has seen since the beginning of July 2016.

One year ago, 1303 auctions were held across Melbourne and 79.4 per cent were successful.

Strong bidding took the Coburg sale price to $1.631 million as four bidders fought for the property.

The price expectations for the renovated California-style bungalow sat between $1.35 million and $1.45 million.

Across Sydney, preliminary results show that 61.5 per cent of the 756 reported auctions sold this week.

There were 1035 properties taken to auction across the city, down from 1102 last week when the final clearance rate was recorded at 58.5 per cent.

Over the same week last year, 1082 auctions were held and a clearance rate of 79.6 per cent was recorded.

It was on the market for the first time in 60 years.

The 412 sqm landholding featuring a freestanding double-fronted main residence and a self-contained cottage with separate frontage had a R3 Zoning.

In Adelaide, a 66.3 per cent preliminary result was recorded across 146 auctions. Last week, 128 Adelaide auctions returned a clearance rate of 62 per cent for the city, while at the same time last year, 137 homes were taken to auction, with 66 per cent recording a successful result.

Adelaide had the cheapest sale across Australia when $199,000 secured 8 McCartney St, Morphett Vale.

The brick veneer and tile residence was marketed as having “been subjected to termite damage” compromising the integrity of the home.

“The home offers the experienced builder or those looking to acquire the property at potentially less than land value an opportunity to capitalise on 560 sqm in a great location,” the marketing advised.

“This property is not for the faint hearted,” it added.

Canberra was the second-strongest weekend market, with 130 homes taken to auction with a clearance rate of 67.6 per cent, down slightly from 69.7 per cent the previous weekend.