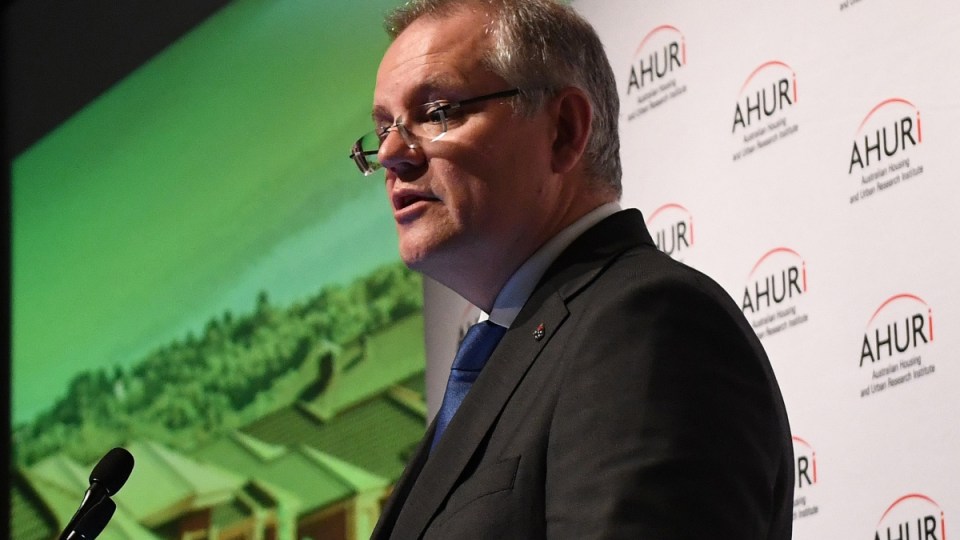 Mr Morrison claimed the whole point of returning a budget to surplus was so that the money could be spent. Photo: AAP

Not only will the Coalition leave negative gearing tax perks untouched in the 2017 budget, it is unlikely to include any measures aimed at curbing house price growth.

Treasurer Scott Morrison flagged the government’s inaction during a key pre-budget speech on Monday when he said it was “not our plan” to “undermine” prices.

“The more than two-thirds of Australians who live in owner-occupied homes would not thank us for putting in policies that undermine the values of their own homes. They wouldn’t welcome that,” Mr Morrison said.

“They wouldn’t consider that good policy and neither does the Turnbull government.”

The Treasurer was speaking at the Australian Housing and Urban Research Institute (AHURI), many of whose researchers support cuts to property investors tax concessions.

He made it clear the upcoming May 9 budget will use “a scalpel, not a chainsaw” to tackle the issue of affordability.

“Our policy response must be careful, it must be calibrated, less we spark a negative housing shock that would undermine our economic confidence, that would negatively impact household consumption and would retard economic growth.”

He yet again ruled out changes to negative gearing, a tax deduction that allows property investors to claim interest repayments and other expenses, because it would drive up the cost of renting.

“Disrupting negative gearing on the scale that has been proposed by many wouldn’t come without a cost, especially to renters, let alone the wider economic impacts,” he said.

“Proponents of disruptive, large scale changes to negative gearing, I think have glossed over this fact. It wouldn’t be good news for the 30 per cent of Australian households who rent, particularly those on the lowest incomes.

“Mum and dad investors are putting a roof over the heads of around a quarter of all rental households in this country. Keeping them in our private rental market is important for ongoing rental supply. Who will replace them if they are to withdraw from the market?”

“Apart from ruling out any changes to negative gearing, that’s the only single policy he is announcing today — a policy to do nothing,” he said.

“Any housing affordability plan which doesn’t involve reform to negative gearing is a sham.”

With house prices sacrosanct and tax perks untouchable, it seems increasingly likely the budget will focus on rental affordability, as a way of helping potential buyers save for a deposit quicker.

Mr Morrison again mentioned the UK approach of a ‘bond aggregator’ to fund affordable housing. It has the backing of AHUIR, and appears to be the only affordability measure that’s a certainty for the budget.

“It would issue bonds to the market and on lend them to fund community housing providers and potentially in partnership with their joint partnerships potentially from the private sector, allowing them to access to cheaper and longer term finance,” he said.

“The housing finance corporation in the UK has operated a similar model successfully for 30 years and more.”

While the government has flagged the idea of incentivising retirees to ‘downsize’ to free up housing stock, the Treasurer did not raise it in Monday’s speech.