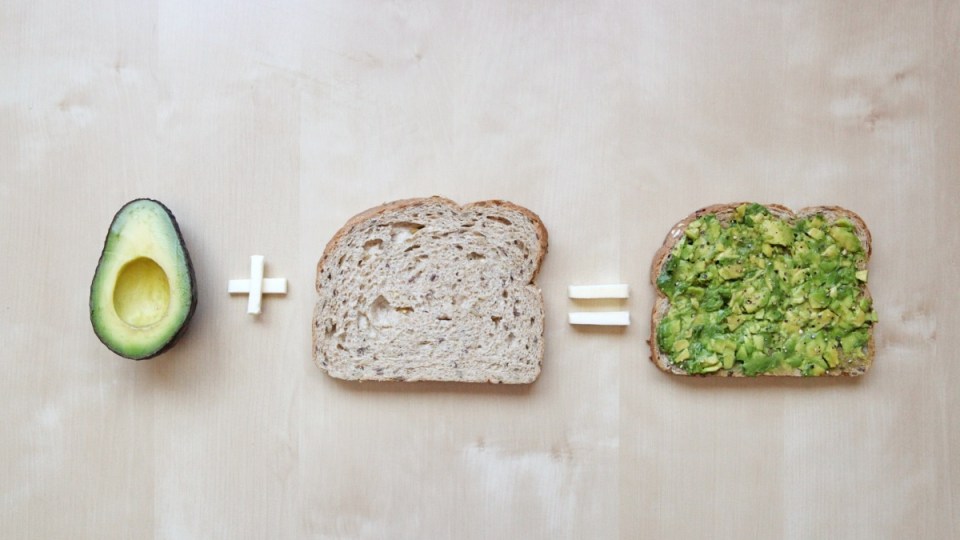 Cutting back on avo may not add up. Photo: Getty

Cutting back on expensive overseas trips, not avocado toast, could be a better way to pull off the superhuman feat of buying a first home, according to experts.

Houses are undeniably more expensive, UTS finance lecturer Dr Adrian Lee, an expert in real estate, said. But if young Australians set their hearts on buying, sacrifices must be made.

“Naturally, you’d have to sacrifice those big trips, big accessories and cars to save up for the deposit,” Dr Lee said.

The ‘smashed avocado’ debate dominated this week’s news, sparked by a column by demographer Bernard Salt.

It was written in jest, Mr Salt argued in subsequent interviews. But many young Australians read it as an accusation — that wasteful spending on “smashed avocado with crumbled feta on five-grain bread at $22 a pop” is what’s holding them back, not rampant prices.

It was followed by a far more inflammatory article by economist Stephen Koukoulas, who wrote for Yahoo Finance on Thursday that millennials are acting like toddlers by demanding smashed avo, overseas holidays, the latest technology AND houses.

The retort from angry young adults was loud, but largely well-informed. As The New Daily has reported, ownership rates among those aged 25-34 are falling, housing costs as a percentage of income are rising, and cheap houses are harder to find.

But for those determined to buy, the path to property is the same. It’s just harder.

All the experts agreed that houses are less affordable, especially in hot spots like Sydney and Melbourne. But they also said it is still possible to buy, so long as young Australians are willing to make bigger sacrifices than previous generations.

“Whilst the smashed avo debate was somewhat tongue-in-cheek and obviously an exaggeration of what kids should be giving up, nevertheless, if you’re going to save for a deposit, you have to give up other things,” Urbis chief economist Nicki Hutley said.

“Obviously you’re going to save a lot more if you don’t travel to Europe or Asia once a year than if you give up your eating.”

Overseas travel can have a doubly harmful impact on savings, because it often involves time out of the workforce. This can mean lost earnings potential and delayed career advancement, Ms Hutley said.

Behavioural economics tells us we often pinch pennies on smaller purchases, but forget to economise on more expensive items.

Many experts pointed out during the avo debate that cutting back on brunch yields very modest savings. For example, if you spend $15 on brunch five times a week, curbing that to $10 would only save you $1300 a year.

It might be smarter to cancel a holiday, buy a cheaper car or eek a few extra months out of your smartphone or laptop. That could save you thousands.

ME bank conducted national research in November 2015, which found that 41 per cent of Millennials (Gen Y) had delayed or downsized holidays to get into the property market for the first time.

A further 27 per cent had delayed buying a car, or bought a more modest vehicle. Delaying children (24pc), weddings (23pc) and honeymoons (21pc) was also common.

This suggests many young Australians keen on home ownership have already seen the wisdom in sacrificing travel for property. But perhaps not all?

Many young Australians want to buy big homes close to the city, several experts said. If this is your goal, you’re likely to be disappointed.

There is no such thing as an ‘Australian property market’. Sydney, Melbourne and Brisbane are booming, while country areas and cities like Hobart, Perth, Darwin are not. If you really want a house, look beyond the big cities.

“Things are expensive. But if you really need the house then you do need to opt to buy something more modest,” Dr Adrian Lee said.

“Unfortunately, it’s getting more and more modest in some areas. So you have to sacrifice being close to your work because you can’t afford it straight away. That’s what you have to do to get your foot in the door.”

It’s a cliche, but be the change you want. Write to local politicians and the government. Be vocal.