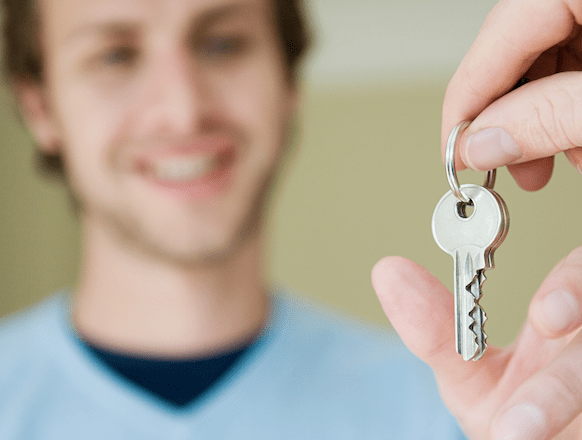 High property prices have encouraged young Australians not to move out of home. Photo: Getty

Both consumer confidence and business confidence took a dive this week, which is not what the RBA would have hoped when it cut rates to another record low last Tuesday.

On the top-line figures, then, we’re getting gloomier.

It’s important to remember, however, that every such index is an average of what the survey respondents said.

It’s a bit like the stockmarket – on a day when the ASX200 index falls 1 per cent, you might find retail stocks rose sharply while mining stocks pulled the index the other way.

So whose confidence stocks are rising and whose are falling? Or more to the point, given that households’ views of the 12-month economic outlook fell by a whopping 8.5 per cent, what’s on the scenario that might cheer householders up?

The word ‘householder’ holds part of the answer, because over the past three decades the make-up of typical households has changed – young adults have, for a range of reasons, stayed at home longer.

Researchers put this down to a number of reasons, large rises in dwelling prices and rents have been a major factor.

While having adult kids at home is a positive for some families, a paper written by University of Melbourne researchers Katherine Burn and Cassandra Szoeke last year identified some big drawbacks.

The report, ‘Boomerang families and failure-to-launch: Commentary on adult children living at home‘, reviewed studies of this trend around the developed world and noted that: “… living with parents can … pose a threat to autonomy and self-image as [adult children] strive for adult status.

“Parents, on the other hand, are often beleaguered by the economic and emotional demands of their dependent adult children and struggle to maintain their own independence.

“… Parents’ out-of-pocket expenses have a sizeable negative impact on parents’ satisfaction, even if the child is making some financial contributions.”

What has all this to do with consumer and business confidence?

Well the government, and the RBA, are doing everything they can to encourage domestic consumption – which in turn would stimulate much needed business investment and job creation.

Retail sales, household services, hospitality and the like will not fully replace the incomes boosts that flowed from the mining boom, but they can help hold up an economy in transition.

Yet households are not spending the way the RBA intends – each time it cuts rates, middle-aged parents tend to keep paying down their mortgages by the same monthly amount rather than spend the difference.

And their adult kids, saving for a first-home deposit, watch home values continue to climb – especially in Sydney and Melbourne – meaning they’ll need an even bigger deposit, and more time with Mum and Dad to save it.

But this pattern may soon be changing. There has been an apartment construction boom over the past six years in Victoria and New South Wales, and over the past three years in Queensland.

Completed high-rise apartments are reaching the market at the rate of about 50,000 a year across Sydney, Melbourne and Brisbane.

In its most recent Statement of Monetary Policy, the Reserve Bank warned: “There are some concerns about the concentration of new supply in areas such as some parts of inner-city Melbourne and Brisbane.

“Downward pressure on prices from large increases in supply relative to demand for apartments in some areas could increase the risk of off-the-plan purchases failing to settle.

“More generally, a further increase in the supply of apartments is scheduled over the next couple of years. While this will continue to support economic activity over this period, it will tend to constrain growth in housing prices and rents, at least in some markets.”

That’s bad for some middle-aged property investors, but likely good news for their kids.

In strict numerical terms it may be more thrifty for mum, dad, their offspring and even the offspring’s partners, to live under one roof.

But ‘thrift’ is not always a virtue. Economist John Maynard Keynes coined the term ‘paradox of thrift’ to explain how an economy of ‘thrifty’ individuals can grind to a halt during a downturn due to weak demand.

Weak demand is what we have at present. And while it may look ‘inefficient’, an increase in the number of young adults taking advantage of the apartment glut to move out of home would boost domestic demand and job creation – not just because they’ll be spending more, but because their empty-nest parents are likely to as well.

Every family is different, but the looming apartment glut may come as a relief to some – and to the economy more generally.

The apartment glut will be good for young Australia