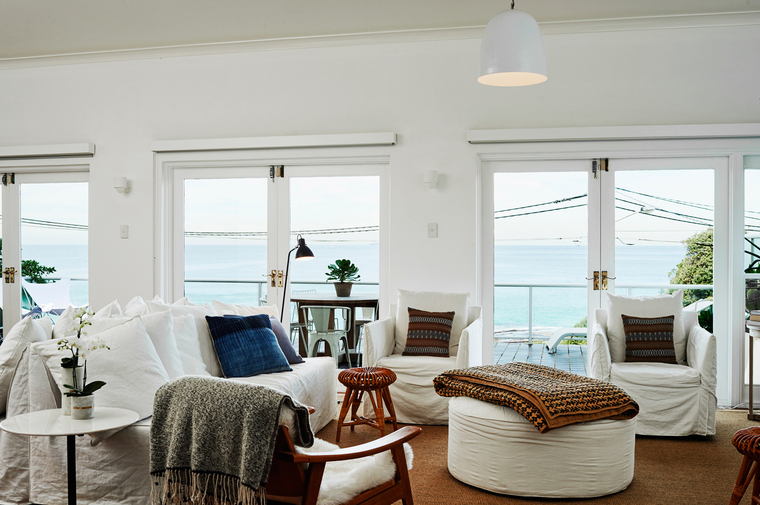 The four-bedroom property is in a prime oceanfront position. Photo: Goodyer Real Estate

The London-based Granger, whose popular chain of Bills cafes is located in Sydney, Japan, Hawaii, Seoul and London, was holidaying in Cairns, so did not attend the damp Saturday auction, which sold to a young couple of Asian background.

Granger and his wife Natalie Elliott only purchased the holiday home in September for $4.805 million, with the near $1.6 million windfall reflecting 20 per cent annualised price growth.

Real estate agent Pauline Goodyer told The Daily Telegraph that the family were looking for ‘something smaller’.

With even lower interest rates assisting robust auction markets, the capital city preliminary clearance rate rose from 72 per cent to around 75 per cent in preliminary CoreLogic results from 1600 auction offerings.

CoreLogic spokesperson Kevin Brogan said that auction activity was almost 1000 listings down compared to the same week one year ago, adding that not all markets were seeing better success rates.

“Melbourne, Sydney and Brisbane saw a rise in auction clearance rates, while across the remaining cities; week-on-week results show a fall in clearance rate,” he said.

Melbourne’s weekly clearance rate was up to 76 per cent from 75 per cent, but lower than last year’s 78 per cent.

Canterbury had Melbourne’s top sale – well above its $3.5 million reserve – when a three-bedroom home sold for $4.11 million with four bidders competing through Kay and Burton.

Melbourne buyers agent Mal James advised the strong result at 9 Victoria Avenue, Canterbury highlighted the re-emergence of the Asian market and “it’s clashing with the strong local market” which prior to the winter break had been left to provide the market leadership. He advised three of the four bidders were of Asian background.

“We are a multicultural city and therefore it’s impossible for us to determine the exact nature of everybody’s citizenship on the fly at an auction – so what we are saying is, we are seeing stronger and more bidding from buyers with an Asian background – more bidding than we did in the second half of last year and the first half of this year,” Mr James suggested.

The most affordable auction property reported sold at the weekend across the country was a one-bedroom unit at 3/239 Canterbury Road, St Kilda, that sold for $211,000 by Gary Peer and Associates, who had been giving a revised $200,000 plus price guidance.

Sydney secured its second weekend with 80 per cent of reported results sold at auction, the 15th consecutive clearance rate above 70 per cent for the city.

The 526 offerings compared to last week’s 509 volume, but significantly lower than one year ago, when 1103 Sydney homes went to auction.

At around 74 per cent, Canberra was the strongest capital city outside the two auction engine rooms followed by Adelaide’s 67 per cent and Brisbane’s preliminary rate of 59 per cent, which is the Queensland capital’s strongest clearance rate for the year to date.

Although set to rise gradually over coming weekends, auction volumes will likely remain well below last year’s boom-time record numbers, according to Domain economist Dr Andrew Wilson, who anticipates listings will be similar to the 2014 and 2013 pre-spring markets.