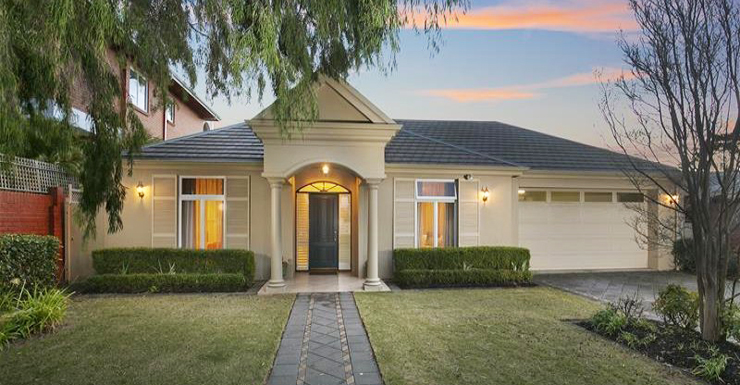 The Somerton Park house of slain Adelaide Crows AFL coach Phil Walsh has gone on the market with offers sought by July 18.

The four-bedroom, two-bathroom Bungey Ave property is listed by McCammon Real Estate, with hopes it will fetch between $1.175 million and $1.25 million.

The property’s listing marked almost a year to the day after Walsh’s death.

On Sunday, the anniversary of his death, a tree was planted in the grounds near Adelaide Oval as a permanent memorial to the beloved coach. Thousands of floral tributes left outside the club’s West Lakes headquarters were turned into mulch for the tree.

“The outpouring of emotion and response, especially here in South Australia at the time of his passing, was nothing short of extraordinary,” Crows CEO Andrew Fagan told the ABC.

Phil Walsh’s son, Cy Walsh, pleaded not guilty by reason of mental incompetence to the murder of his father in July 2015.

Elsewhere in Adelaide, there were 69 auctions held, down from 90 last week. The preliminary auction clearance rate was 74 per cent, a substantial rise from 59 per cent last week. One year ago, 85 Adelaide auctions were held with 69 per cent sold.

The real contest over the election weekend was between Sydney and Melbourne. It was neck and neck when the Domain website advised Saturday night’s auction clearance rates.

There was nothing between Sydney and Melbourne, with both major auction capitals on 73.5 percent — a rise for Melbourne and dip for Sydney.

There were just 200 auctions in each city, given the school holidays, winter and election distractions.

There were four registered bidders after the $3.5 million opening bid.

The Australian test cricketer David Warner has made the most of the auction off-season with the $800,000 sale of his Matraville investment apartment.

It was a pre-auction sale for the two-bedroom, two-bathroom Bunnerong Road apartment which cost $695,000 in 2014 when the off plan purchase was settled on construction completion.

The former Matraville Public School student is realigning property assets ahead of building in Maroubra on an oceanfront reserve block bought last year for $3.9 million.

David Warner and wife Candice sold their home in South Coogee earlier this year for $7.05 million.

Bellbird Park outside of Brisbane had the nation’s cheapest sale.

It was a 1980s villa with 80 sqm internal space on 400 sqm in the Ashwin Gardens estate that had been listed by private treaty late last year without success with $210,000 hopes.

Brisbane’s auction volumes fell from 175 to 66 this week, according to CoreLogic with the preliminary results showing 38 per cent of auctions were successful, down from 41 per cent over the previous week.

One year ago, 115 auctions were held across Brisbane with 63 per cent clearing, which was the second strongest clearance rate seen in the city last year, CoreLogic’s Kevin Whelan noted.

Overall CoreLogic advised 70 per cent of capital city auctions across Australia were successful, according to the preliminary results.

It was higher than the clearance rate recorded over the first month of winter in 2016 of 67 per cent.

The number of residential auctions held this week was around 800, down substantially from 2,200 last week.

Across Sydney the North Sydney and Hornsby was the busiest region for auctions and preliminary results showed 86 per cent of reported auctions were successful.

Melbourne’s best performer across the city was the inner South sub-region that had a 100 percent clearance rate, but just from the 17 reported auctions.

Phil Walsh family home on sale a year after tragedy