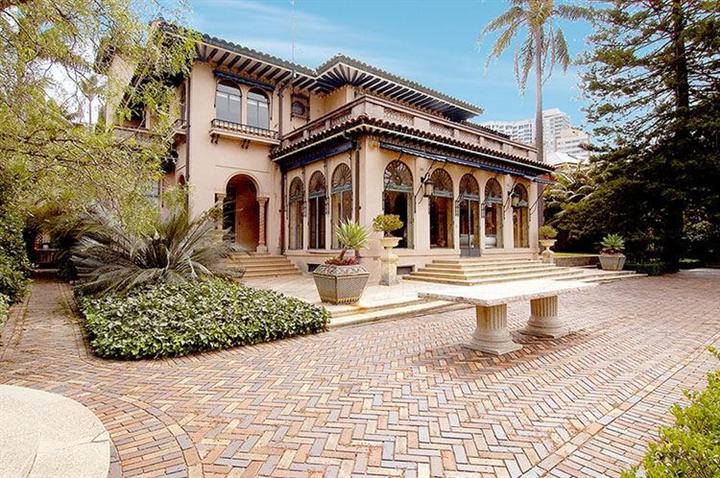 Sydney’s finest Spanish mission-style trophy home ‘Boomerang’ is up for sale with reports suggesting it could fetch a whopping $60 million.

Lindsay Fox, the Melbourne-based billionaire trucking magnate, has held the Elizabeth Bay landmark harbour-front home since 2005. It was bought for $21 million.

The Billyard Avenue property has been offered quietly through the Ray White Double Bay office who seemingly don’t value it as a record-setting property anymore.

The Hollywood-style mansion has often been ranked as the most expensive house in the country.

It was the first property to crack the $20 million level. It was also the first Sydney home to fetch more than $1 million when sold by the original owners in the mid-1970s.

The Fox family have preserved the home’s interiors, with the noticeable difference being outside, having commissioned landscape designer Myles Baldwin to do the gardens on the 4200 sqm estate.

It was built at a cost of 60,000 pounds for music book publisher (Sir) Alexis Albert, who lived there until he died in 1962 with it then vacant for more than a decade.

Perth-based developer Warren Anderson owned it from the mid-1980s until 1993, when he was evicted by the Bank of New York and it was sold by the mortgagee to the now jailed fraudster Nati Stoliar for $6.6 million.

Then a merchant banker, Malcolm Turnbull underbid at a 1993 auction for the home with its majestic Moorish porte cochère, arcaded loggias, oak panelled library with Tudor-style fireplace and its so-called peacock room conservatory.

Victoria’s priciest home remains the Spanish mission Portsea clifftop home, Ilyuka, which was sold to the Higgins family at $26 million in a 2010 exchange by former Computershare director Michele O’Halloran.

A lavish modern Toorak mansion owned by one of the well-known Smorgon family is currently listed with expectations of smashing the record as Victoria’s most expensive property.

The nation’s priciest weekend auction result was when an Elizabeth Bay harbourfront apartment – five doors along from Boomerang – fetched $7 million.

It last sold in 1997 at $3.6 million off the plan. There were just two bidders for the 240 sqm, three-bedroom apartment, which sold through McGrath agent Peter Starr at its reserve price.

There was a big Brighton sale too – but it was a record price paid for a bathing box on Dendy Beach.

According to CoreLogic RP Data, as the property market moves towards its traditional winter hibernation, Melbourne was by far the busiest capital city auction market this week.

The success rate for the city remained steady at 70 per cent, but well down on the 80 per cent last May.

Sydney has maintained a relatively strong mid-70s clearance rate since mid-February this year.

Brisbane had 190 auctions this week, up from 131 last week, but lower than the 213 one year ago. Preliminary results show a clearance rate of 40.2 per cent across the city, compared to 50 per cent last week and 48 per cent at the same time last year.

The preliminary clearance rate for Adelaide was 52 per cent this week with 122 auctions held, down from 68 per cent last week across 92 auctions.

There were 107 Canberra auctions this week, the busiest week since March with a 64 per cent success rate, down from 67 per cent last week and 68 per cent one year ago.

Meanwhile, property construction across the country has come to a grinding halt to the tune of $5 billion, according to the Australian Financial Review.

The newspaper is reporting that developers are getting cold feet as an ‘oversupply’ of apartments is driving prices down and costs up.

“I think a lot of people are more cautious now and sensibly so,” property planning expert Peter Hyland said. “People are closely looking at who is carrying the risk. People are looking at how the market is slowing and they have to be prudent.”