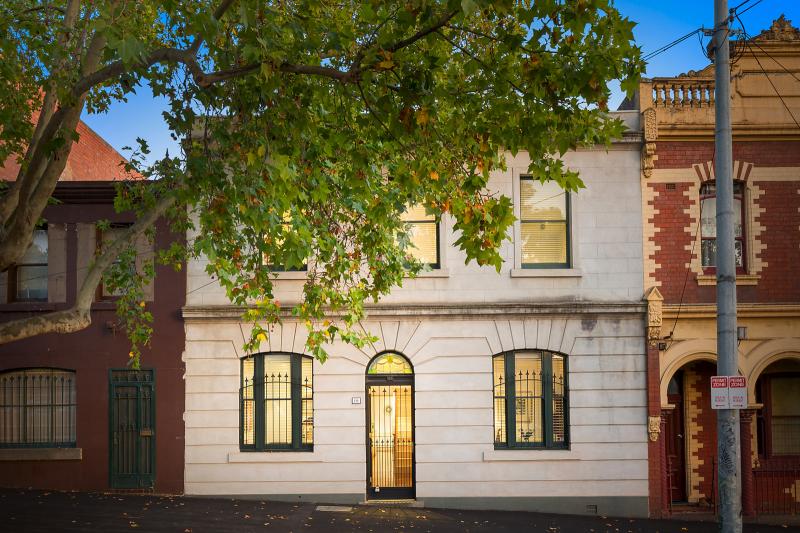 It might be a cliched marketing claim, but the former Carlton tavern supposedly frequented by 1920s gangster Squizzy Taylor has sold at its weekend auction.

The 1850s property on Barkly Street, which had a price guide of between $2.25 million and $2.5 million, fetched $2.6 million through Nelson Alexander agent James Keenan.

The property, which was built in 1856, was a tavern before being transformed into a two-level, five-bedroom home renovated by architect Shane Murray.

Taylor was fatally shot by rival John “Snowy” Cutmore in 1927 at a house in the street.

Sydney’s weekend went without any of its cliched ‘Henry Lawson slept here’ offerings.

But a Glebe property with a fascinatingly disturbing past did go to auction without initial success.

It was the home designed by esteemed architect John Verge as a marine villa for the colonial surgeon James Bowman, the husband of the iconic pastoralist John Macarthur’s daughter, Mary.

Lyndhurst’s colourful history saw it briefly as the headquarters of an Australian neo-Nazi party in the late 1960s.

Regarded as one of inner Sydney’s most historically significant homes, it last sold at $3.3 million in 2005 to stockbroker Tim Eustace and his partner Salvatore Panui.

Eustace and Panui are bound for Darlinghurst, where they bought another historic inner city landmark, Iona, for $16 million from entertainment industry couple Baz Luhrmann and Catherine Martin.

The top result under the auction hammer at the weekend was in Strathfield, in Sydney’s inner west where Dr Vipin Goyal sold his seven-bedroom home for $6.83 million through Devine Real Estate.

Lee appeared as an actor in roles including Muriel’s Wedding, Holy Smoke and The Castle, but she is now better known as an author.

The other big coastal offering, the Tamarama home of the pioneering former Oxford Street fashion retailer Robby Ingham and his wife Sarah, was pulled from auction.

Its listing with $12 million-plus hopes came as they have finished construction of their new home just around the corner.

The Gaerloch Ave property, listed through Pauline Goodyer of Goodyer Real Estate, has point blank ocean vista and views back to beach given its position above the iconic coastal walk.

The national clearance rate across the combined capital cities rose this week, up from 69 per cent the previous week to 70 per cent.

The level of activity across the capital city auction market was similar to the previous week, with 1863 auctions held this weekend, compared to 1876 last week.

Auction activity remains well below the comparable week last year, however, when 2599 capital city auctions were held and 79 per cent cleared.

Preliminary results show that 70 per cent cleared this week, falling from 71 per cent last week and well below the 82 per cent one year ago.

CoreLogic RP Data noted over the past seven weeks, Melbourne has maintained a clearance rate above 70 per cent.

Its top reported sale was $3.9 million in Brighton on Champion Street.

Sydney’s preliminary clearance rate was 74 per cent this week, retaining its status as the nation’s strongest property market.

Brisbane results showed a strong 55 per cent, compared to 49 per cent last week, and the strongest clearance rate in 12 weeks.

The nation’s cheapest sale was in Adelaide’s Rostrevor.