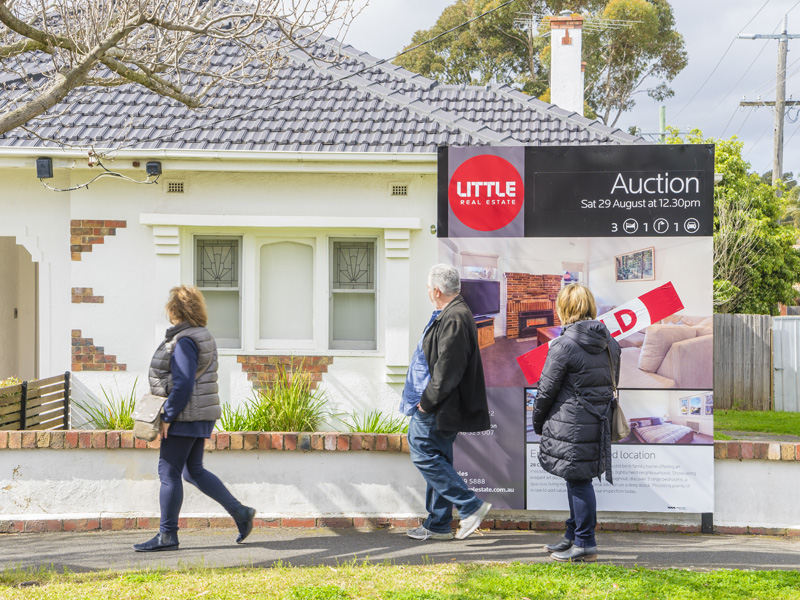 Auction clearance rates in Sydney have slumped to a three-year low following a shock interest rate rise by Westpac and predictions that the rampant east coast property market could slide more than 7 per cent in the coming months.

As speculation mounts about a correction in the Australian property market, Sydney auction clearances fell 5 per cent in a week, but the pessimism did not extend to Melbourne which recorded a 2 per cent increase on the same time last year.

“I don’t want to use the word ‘crash’ yet … but obviously there must be a correlation with the attention given to the interest rate rise,” senior economist Andrew Wilson told Domain.

“The higher interest rate clearly spooked an already skittish Sydney property market … it’s the lowest clearance rate since the spring season of 2012 – that was a pretty soft market.”

But if they did, the Reserve Bank of Australia (RBA) would seek to off-set that by cutting the cash rate, independent economic analyst Saul Eslake told The New Daily.

Mr Eslake also blamed a shift in housing sentiment to the crackdown by the Australian Prudential Regulation Authority (APRA) on lending to investors, which could help to dampen prices.

“A modest change in the housing market wouldn’t be a bad thing,” he said.

“I think, and more importantly the Reserve Bank thinks, it would be a good thing if prices stopped going up at the rates they had been in Sydney and Melbourne.

“That may be something that’s unfolding, not least by the measures implemented by APRA earlier this year to rein in the growth of lending to investors, which since rates have been falling since late 2011, and accounted for more than half of lending to Australians for purchasing dwellings.”

He said there was not much risk of a price decline in the next six to 12 months, but said there could be price changes within two to three years.

“While Macquarie and others said houses must fall in March, they are not the first to predict falling house prices,” Mr Eslake said.

“You will usually see a fall in house prices when house owners are forced to sell because they can’t meet mortgage repayments due to high interest rates and high unemployment rates, or housing supply is significantly higher than the demand, pushing housing prices down.

“But, neither of those conditions apply in Australia right now … that would precipitate a big fall in house prices.”

Last week analysts at Morgan Stanley warned that the cooling housing market raised the risk of a recession in Australia and increased the need for more economic stimulus from the Federal Government.

Westpac said last week it would increase variable interest rates on home loans for owner-occupiers and property investors by 0.2 of a percentage point.

It blamed the rise on new regulations from the APRA, requiring banks to bolster their capital reserves to protect against future financial crises.

It said the higher interest rates would cost customers up to $155 billion and impact about 12 per cent of home loans in Australia.

In a research note to clients, Morgan Stanley said Westpac’s move would put a “meaningful dent in fragile housing sentiment”.

“We expect WBC’s [Westpac’s] repricing is likely to have a disproportionate impact on housing sentiment, given it affects the entire back book, comes without the cover of an RBA rate cut, and takes effect right ahead of two ‘super-weekends’ of elevated auction volumes,” the note said.