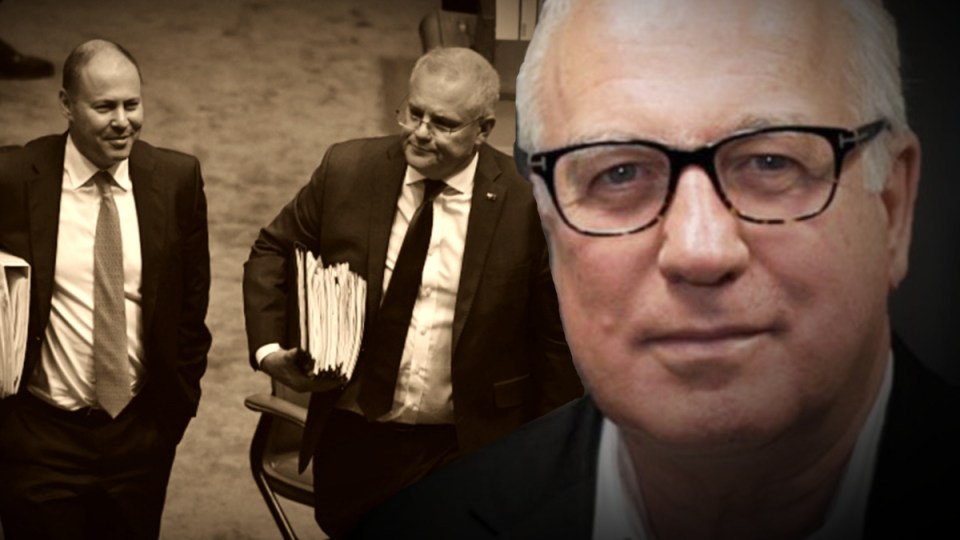 The government has flipped the script on years of 'debt and deficit' rhetoric. Photo: AAP/TND
analysis

Josh Frydenberg’s third budget went further into the red of any budget of the past 50 years, including all of Labor’s and all of the recessions.

Over the four years covered by it, 14.1 per cent of total government spending will be funded by issuing debt rather than collecting taxes.

But those percentages aren’t disclosed in the budget papers, where everything is expressed as a percentage of GDP.

Not only is Australia not in recession now, the economy is growing strongly, exports are booming and unemployment is forecast to fall close to its lowest level for decades.

It’s only a slight exaggeration to say the Coalition is trying to build a Scandinavian welfare system without Scandinavian taxes, using debt instead. It’s economic heresy, but politically devastating.

Money is going to higher unemployment benefits, child care, aged care, women’s safety, infrastructure and carbon emissions reduction at the same time as taxes are being cut, not increased.

It’s Reaganism redux, and half of Modern Monetary Theory – the half that asserts “debt and deficits don’t matter”.

(The Reserve Bank is separately doing the other half – printing money – but it’s independent and refuses to directly fund government spending with the printed money, not that the government is asking it to. The RBA is buying the bonds from the banks and super funds that have bought them from the government.)

Call it what you like, this Treasurer has overturned generations of conservative economic thinking and political conventions generally: Promising to spend more and tax less, and letting the deficits run, is something no political party has ever been game to try in good times.

As a result, the Labor Party is a rabbit in the headlights.

The Coalition is the only side of politics able to do it: If an ALP treasurer brought down a budget like this he or she would be crucified by the right, as Wayne Swan was between 2009 and 2013, when debt funding was a mere 10 per cent of government spending.

But now the right-wing media are fully on board with the plan (with the exception of the Australian Financial Review, which calls it a “dangerous trap”).

And the Labor Party can’t attack it because the spending is what it would do and it can’t go to the next election proposing tax increases to get the deficit down and offer itself as the party of fiscal rectitude.

Anthony Albanese is cornered, and in the budget reply speech he was reduced to talking about his childhood and proposing $10 billion on public housing.

Josh Frydenberg must have kicked himself for missing that one.

The Labor Party has to think of something else or we will be witnessing its “long slow death’, as Troy Bramston predicted in The Australian on Saturday.

Blast from the past

Last week former British PM Tony Blair reinforced the warning for the ALP, along with all progressive parties, and also provided a solution.

In an essay in The New Statesman, Blair wrote that “progressive parties of the centre and centre left are facing marginalisation, even extinction, across the Western world”.

He went on: “The progressive problem is that, in an era where people want change in a changing world, and a fairer, better and more prosperous future, the radical progressives aren’t sensible and the sensible aren’t radical.

“The choice is therefore between those who fail to inspire hope and those who inspire as much fear as hope.”

Mr Blair pointed out that if progressive parties simply try to get elected by promising the old “tax and spend” policies, the right can do the spending as well, and in these days of low interest rates and MMT, as the Australian Coalition has discovered, they can cut taxes at the same time. Have their cake.

The obvious exception to that is Joe Biden (sensible and radical), but even he isn’t daring to copy the Australian Coalition. His huge spending plans are accompanied by $US3.5 trillion in tax increases for companies and rich people.

Mr Blair points away from taxes and spending altogether, writing that the central political issue of our time is technology.

It is “the most far-reaching upheaval since the 19th-century Industrial Revolution: A technology revolution of the internet, AI, quantum computing, extraordinary advances in genomics, bioscience, clean energy, nutrition, gaming, financial payments, satellite imagery – everything, every sphere of work, leisure and life is subject to its transformative power”.

Dealing politically with the modern challenges posed by this revolution requires deep thought and courage.

Old-style progressive thinking won’t do it, Mr Blair says, nor will the thinking of the new left radicals, which he calls the “rediscovery of 1960s Marxist-inspired left policy by a new generation”.

Not that the Coalition is applying a lot of deep thought or courage to those issues either, just old-fashioned wedge politics through delayed tax cuts and spend as if there’s no tomorrow. But it’s likely to work.

Now is not the time for austerity, says Josh Frydenberg, with an election in mind.

Before the election after next, in four years’ time, gross government debt will be $1.2 trillion according to the budget forecasts, but probably only economists and the Financial Review will care.

That won’t be the time for austerity, either: There’ll be another election to win.

Alan Kohler: Why it will never be time for austerity