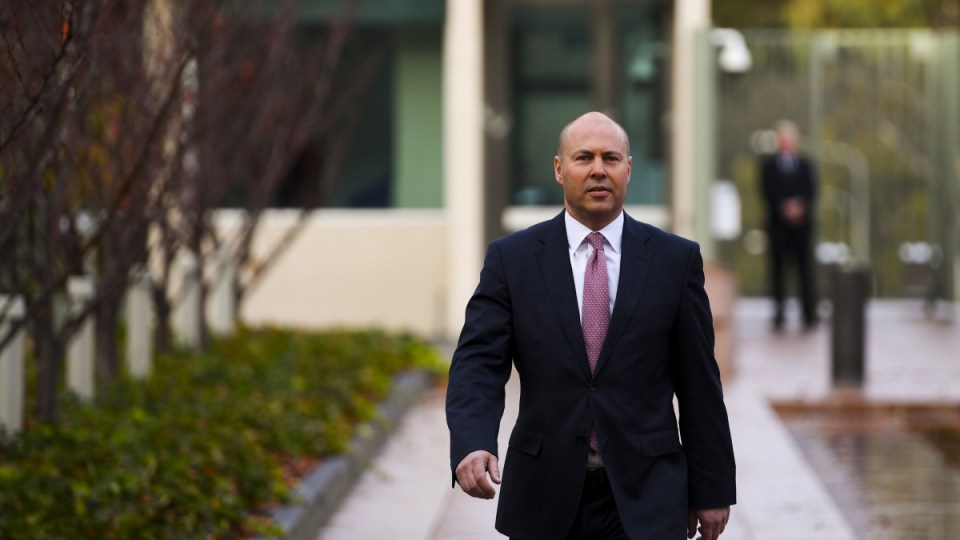 Josh Frydenberg was on ABC's Insiders where he faced a grilling over the government’s tax cuts. Photo: AAP

Federal Treasurer Josh Frydenberg says there’s “a lot of uncertainty” around COVID and when the government may reopen Australia’s borders, but has teased more projections on travel and vaccine rollout will be included in the federal budget.

“Tune in at 7.30pm tonight,” Mr Frydenberg said outside Parliament House on Tuesday morning, when asked about when border closures will lift.

The treasurer is preparing to hand down his second pandemic budget on Tuesday night. As is tradition on budget day, he began the day with a walk into work for the cameras through Parliament House’s ministerial entrance, stopping for a brief press conference for the waiting media.

“The Australian economy is recovering strongly,” he said.

“But the job is not done. There is still more to do.”

Numbers in the federal budget are reportedly projected on the assumption that Australia’s borders will remain shut until some time in 2022.

The New Daily asked Mr Frydenberg when, exactly, his budget assumes the borders will reopen.

“In tonight’s budget, we make some assumptions around vaccine rollout and around border closures and around the containment measure that is are put in place in respect to COVID-19. But it’s very hard to be precise in the middle of a pandemic,” he responded.

“There’s a lot of uncertainty, globally and domestically with respect to the virus. So tonight’s budget has those assumptions in place.”

When pressed on whether he could give a ballpark figure on when borders could reopen, Mr Frydenberg said further information would be revealed on Tuesday night.

“The obvious answer there is we don’t know and we can’t know. Ultimately, we have to be informed by the health advice around how the vaccine rollout will actually protect Australians,” he said.

Health minister Greg Hunt had a similar message on Monday, but said Australians who get vaccinated may be able to travel sooner or with fewer quarantine obligations, which he called an “incentive” to get COVID jabs.

Labor’s shadow treasurer, Jim Chalmers, noted that previous vaccine rollout targets had been badly missed by the government, and called on Mr Frydenberg to “come clean on the costs and consequences of the Prime Minister’s vaccinations debacle.”

“In the last Budget, there was a scenario that said if we get the vaccinations away quicker, there’ll be a multi-billion-dollar benefit for the economy. If that was the case on the upside, we need to know tonight what’s the case on the downside,” he said.

Much of the budget has already been leaked out to media, with promises of “record” spending on aged care, infrastructure and essential services.

“Australia’s strong position today is not the result of luck. Australia
makes its own luck,” he said.

Speaking on ABC Radio National, Labor leader Anthony Albanese repeated his familiar line that the government had a “gap between announcement and delivery”.

“A range of the measures that have been announced far have been measures that Labor has called for either at the last election or before,” he said, claiming Labor “would have done things much earlier.”

Today is the day! #Budget2021 pic.twitter.com/ujXaqVqtRt

Another essential component is the ‘budget tree’, a red maple in the Parliament House courtyard which explodes into brilliant vivid colour each May, usually perfectly coinciding with the budget.

It’s a favourite for Parliament workers to get photos underneath, and even Senator Birmingham got in on the action, tweeting a photo of the tree on the morning of the budget.

But, as The Guardian’s Josh Taylor pointed out, the finance minister must have posted an older photo of the maple, as the tree is looking uncharacteristically bare in 2021.

The budget will be handed down at 7.30pm. Keep an eye out for The New Daily‘s special post-budget newsletter on Tuesday night, and a full wrap in our morning edition on Wednesday.