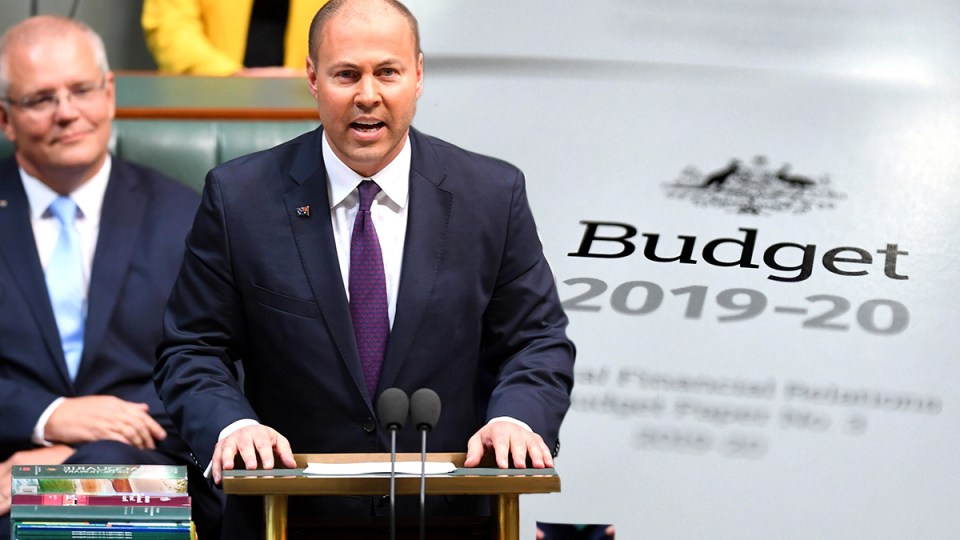 Treasurer Josh Frydenberg has handed down a budget that he hopes will save his government. Photos: AAP

Tax cuts of $1080 could be in workers’ pockets from July 1 under Scott Morrison’s election battle budget, which forecasts a “back in black” surplus next year and doubles tax relief for people earning less than $130,000.

But Treasurer Josh Frydenberg confirmed on Tuesday night the government will refuse to legislate the tax relief until after the May election – despite Labor offering to back the cuts in Parliament this week.

The government will, however, seek to legislate a $75, one-off energy bill payment to pensioners this week.

That leaves a tight timeframe for the tax cuts to be legislated before July 1, raising the prospect that workers could miss out on a bumper tax return this financial year.

Labor leader Bill Shorten had flagged he would support tax cuts in Parliament this week for low- and middle-income earners, which would ensure they are legislated before Prime Minister Scott Morrison calls an election and could be delivered when workers lodge their tax returns this year.

That chess move threatened to neutralise those new tax cuts as an election issue, a prospect the government is clearly keen to avoid.

“We are just not prepared to haggle with the Senate in the remaining 24 hours,” Finance Minister Mathias Cormann said, adding the tax reforms are “a package” that could not be subject to horse trading.

Labor hit back swiftly at Mr Frydenberg’s maiden budget, with Shadow Treasurer Chris Bowen saying it was a budget “for a government that has given up governing”.

“Labor will support the tax cuts that begin on July 1 for working and middle-class people – this is essentially a copy of what we proposed last year, and they are simply catching up to us,” Mr Bowen said.

“But the Liberals are so out of touch that they’ve given a much smaller tax cut to two million Australians earning less than $40,000.

“Labor will fix this and give these working people the tax relief they deserve.”

If re-elected, the Morrison government is also pledging to reduce the rate of the middle tax bracket from 32.5 per cent to 30 per cent – but not until 2024.

It’s that new element the government insists is “a package” that cannot be divorced from the $1080 tax cuts for workers earning less than $130,000.

The government argues these changes, together with the previously legislated abolition of the 37 per cent tax rate by 2024, will ensure that 94 per cent of taxpayers face a marginal tax rate of just 30 per cent within five years.

More than 10 million taxpayers will benefit from the changes for low- and middle-income earners, with 4.5 million workers receiving the full tax cut of up to $1080.

“Taxpayers earning up to $126,000 a year – including teachers, tradies and nurses – will receive a tax cut,’’ Mr Frydenberg said.

“This is money that could go towards your monthly mortgage payment, your quarterly power bill or your yearly car insurance.”

Despite predictions the Morrison government could delay legislated tax cuts for high-income earners in 2024 to pay for the more generous relief, the budget does not abandon any of the three phases of tax cuts previously announced.

That means workers earning more than $200,000 a year can look forward to a tax cut of $7000 a year under the Liberals, but only if Mr Morrison wins two more elections.

The budget expense measures also include $3.2 billion worth of “decisions taken but not yet announced”, which allows the Prime Minister to make further election promises during the campaign.

Mr Morrison told MPs on Tuesday he was “undecided” about calling the election for May 11, 18 or 25, but most expect he will visit the Governor-General this weekend for a May 11 election, particularly after Senator Cormann suggested the Parliament had “24 hours” to run. 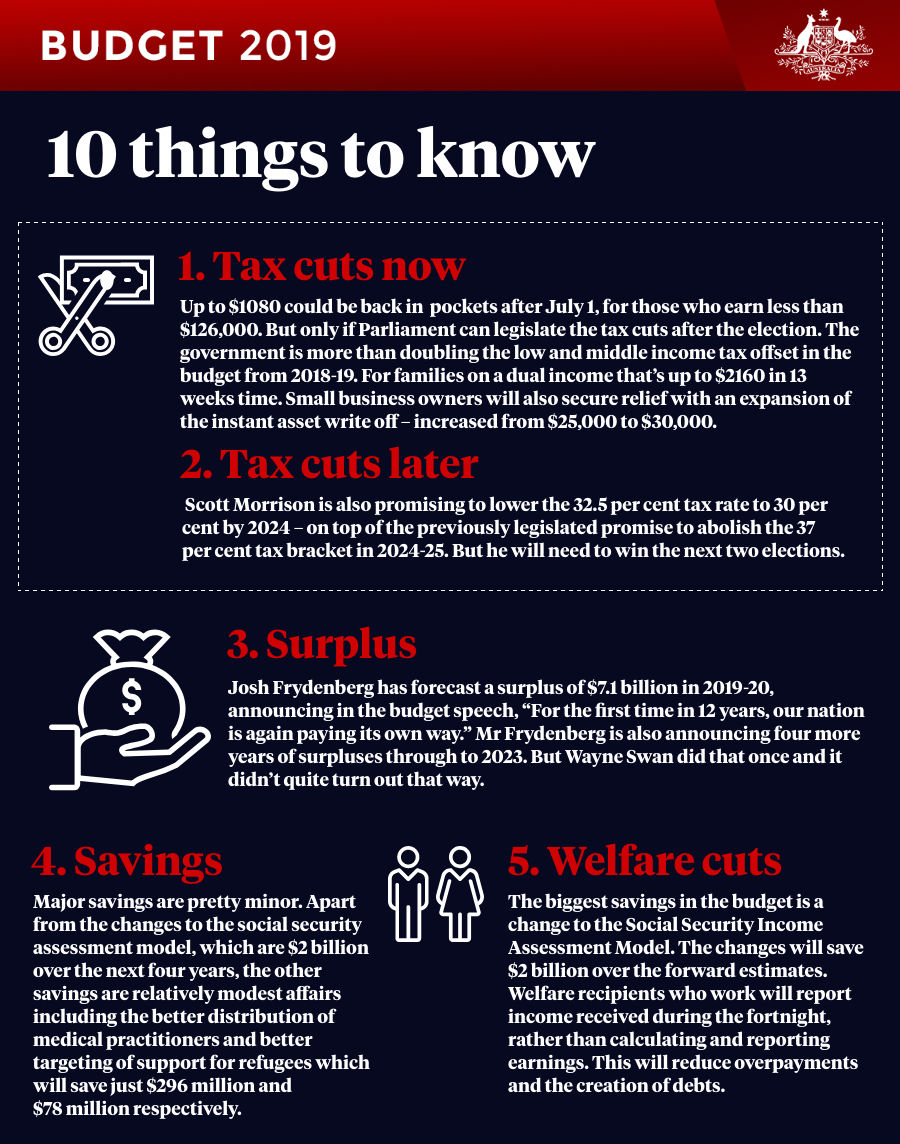 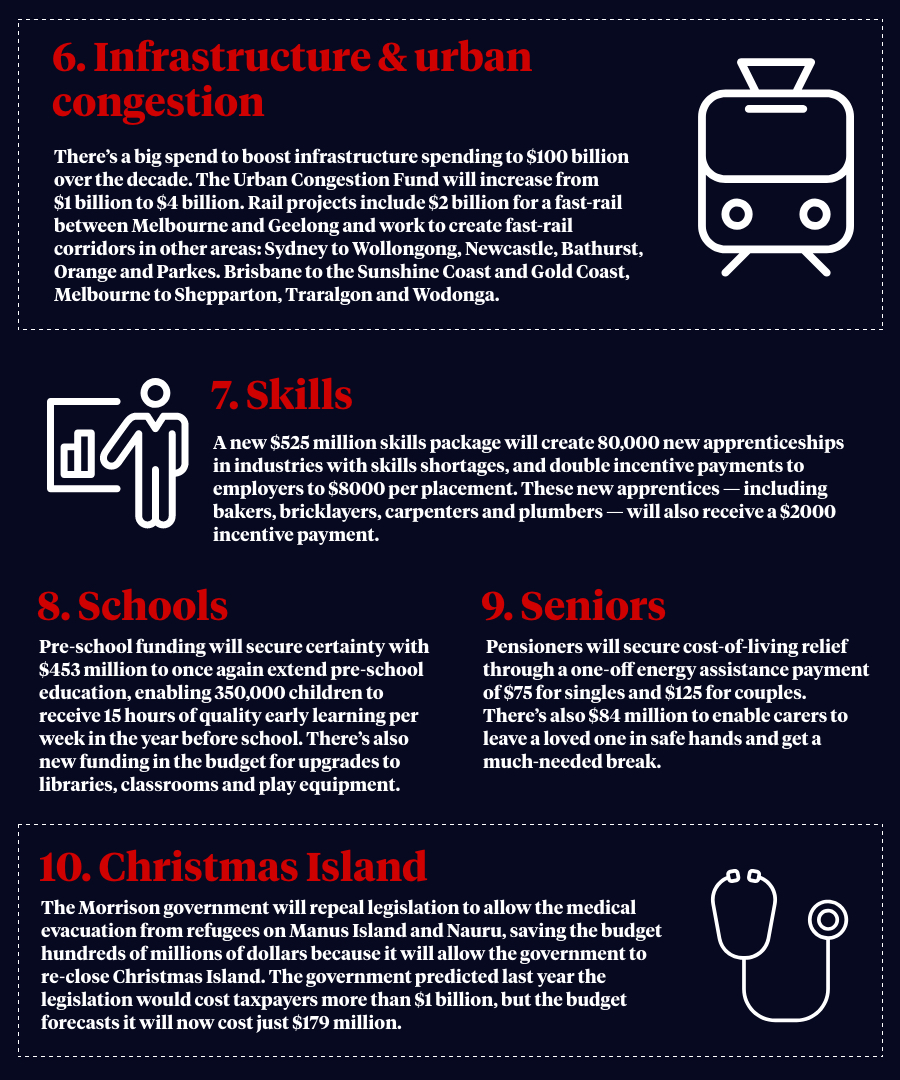 The budget also confirms the Morrison government is forecasting the first surplus in a decade for 2019-20 of $7.1 billion.

Speculation Mr Frydenberg could announce that the budget was already in surplus failed to materialise, with a $4 billion deficit forecast for 2018-19.

The ‘major savings’ are relatively minor, including a new system for welfare recipients to declare income in real time, which the government argues will cut overpayments and save $2 billion.

The net savings over the next four years are just $2 billion.

Despite the big tax cuts, Mr Frydenberg acknowledged storm clouds could lie ahead, noting “the global economy is slowing”.

Mr Frydenberg’s sales pitch is that only the Coalition can restore the nation’s finances “without increasing taxes”, as Labor proposes to do with changes to negative gearing and a tax on banks.

Congestion busting is a major theme of the budget with a $100 billion spend on fast roads, ports and rail links.

“We know you want to be there for the school drop off, to help the kids with their homework and spend more time together at the dinner table,’’ Mr Frydenberg said.

Surprise announcements in the budget include a $525 million skills package to create 80,000 new apprenticeships in industries with skills shortages.

The government will also pledge to double incentive payments to employers to $8000 per placement.

In a sign Labor’s so-called “Mediscare” campaign at the last election is still a concern, the government insisted that “Medicare is guaranteed” with a $6 billion boost.

Despite predictions the medical transfer of refugees from Manus and Nauru could cost taxpayers $1 billion, the budget revealed the Coalition will repeal the laws if it wins the election and close Christmas Island – again – and spend just $178 million.