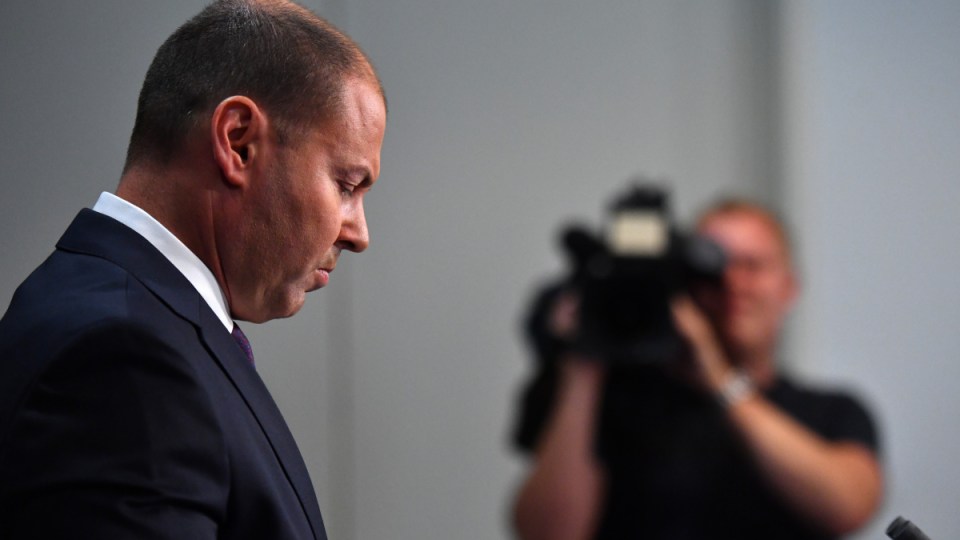 All eyes will be on Treasurer Josh Frydenberg on Tuesday. Photo: AAP

Like a puff of smoke from Joe Hockey’s cigar disappearing into the Canberra air, the promise of a budget surplus has materialised before vanishing for every treasurer since Peter Costello.

Often promised, but never delivered, it has haunted every prime minister who dreamed of singing the chorus of ACDC’s Back in Black into a budget speech.

Now, like Steven Bradbury emerging from a pile-up to score gold at the 2002 Winter Olympics in Salt Lake City, the honour of being the winning treasurer has fallen to an unlikely recipient.

Arise, Josh Frydenberg, Treasurer for just 221 days, who will declare the first surplus in a decade for 2019-20.

Of course, if you’re picky, that’s still just a prediction.

But there is speculation he may declare this year’s 2018-19 budget is already back in black. That is more definitive.

But as we prepare to mark Mr Frydenberg’s unlikely victory, spare a thought for the fallen treasurers left behind.

Peter Costello was the last treasurer to bank a surplus. He appeared genuinely shocked, according to his biographer, Shaun Carney, when he discovered after the March 1996 election that the deficit was thumping $9 billion. It was dubbed ‘Beazley’s black hole’. But it took just two years for Mr Costello to declare a surplus of $2.7 billion in the 1998 budget.

“Back in the black and back on track. A nice little turn of phrase,” Mr Costello said.

Wayne Swan’s first budget announced a projected $21 billion surplus. But the global financial crisis turned that into a $27 billion deficit in 2008/9. In 2012, he announced with flourish in a budget speech: “The four years of surpluses I announce tonight”.

A blink-and-you-miss-it treasurer who served just 83 days in the role under Kevin Rudd, Chris Bowen never had much of a chance to achieve a surplus.

Joe Hockey talked a big game. In 2012, from opposition, he said: “Well I’ve been saying for three years Labor would never deliver a surplus and it looks like I’m proven right.”

“You know, I mean I was just listening to Wayne Swan. It was like listening to the Riddler. Well, if the Australian economy is doing as well as Wayne Swan likes to claim credit for, then why on God’s earth isn’t the government living within its means?”

The same year, he declared a surplus would be delivered in an Abbott government’s first term. “Absolutely. I am absolutely committed to this to the core of my bones,” he said.

Fast forward to Mr Hockey’s time as Treasurer and it turned out the job was harder than it looked.

The Senate was blocking $20 billion in savings to reduce the deficit. The deficits were worse than previously forecast.

A surplus never happened. By the end of his tenure he was relying on a new political formula: “We have never ever put a date on it”.

The current PM secured the job as treasurer after Malcolm Turnbull rolled Tony Abbott in 2015. His first MYEFO document forecast the budget was worse than expected and Mr Morrison changed tack, declaring he would under-promise and over-deliver. He said he would not set “ambitious targets” on when the government would return the budget to surplus.

With the hard yards put in by the treasurers before him, Tuesday night is Josh Frydenberg’s moment to declare the first budget surplus in over a decade.

It’s been a long wait.

‘Promises, promises’, but no surplus delivered. Now an unlikely hero has emerged in the black