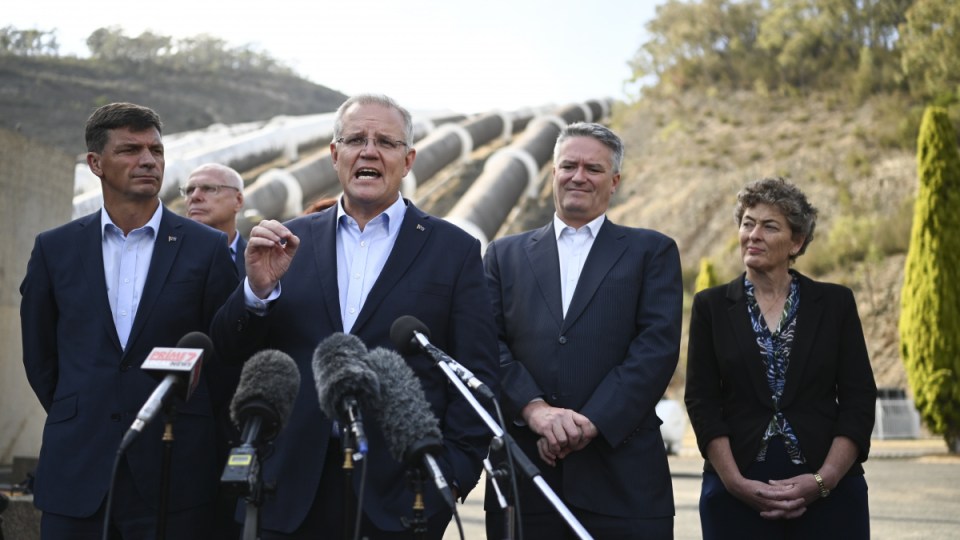 Is it safe to come out yet? Has everyone finished reading more into the NSW election result than was there? Well, not quite …

Widely acknowledged as the biggest losers on Saturday, regional NSW falling out of love with its National state MPs has the federal Nationals more than a little worried.

With only a few weeks available to kiss and make up with the electorate, it would not be a surprise to find the entire National Party camped outside Josh Frydenberg’s door begging for big handouts in Tuesday’s budget.

Problem is, desperate pollies seeking multi-millions before elections tend to make bad, or at least second-rate, decisions on how to spend our money.

Exhibit A: A variation on CJ Dennis’s The Bridge Across the Crick, the $155 million of federal taxpayer dollars promised by Malcolm Turnbull for a new bridge across the Shoalhaven River just before last year’s budget in an effort to shore up his preferred local member, Ann Sudmalis.

That bridge wasn’t just a low priority on Infrastructure NSW’s wish list – it wasn’t on the list at all.

(And as political luck would have it, Ms Sudmalis subsequently decided to abandon ship anyway, a decision for which she was rewarded with a three-month junket to New York.)

Exhibit B: A Barnaby Joyce favourite, inland rail. There is a business case for the inland rail line linking Melbourne to Brisbane, but it depends on some interesting assumptions and remains somewhat marginal. It’s more a matter of political faith than national importance. Meanwhile, if you find yourself travelling regional NSW, you might wonder at the disused railway lines anywhere coal isn’t being hauled.

(Some wannabe Twitter wit – me – dared to suggest Mr Joyce would ensure inland rail line was coal-powered should he be re-elected Deputy Prime Minister. Everyone loves a steam train.)

As many a whiteboard can testify, elections, politicians and other people’s money are a bad combination. The demeaning parade of federal MPs – and even mere Liberal candidates – handing out cheques to bowling and surf clubs is a sad diminution of what should be the division of labour between federal, state and local government. And, yes, all parties do it.

The multimillion-dollar, multi-year infrastructure projects, though, are on another level of responsibility, both for what they tend to end up costing and for the opportunity cost they represent when they’re sub-standard. The NBN, anyone?

As luck would have it, it’s a fertile time for pushing the infrastructure barrow when economic growth is softening and the market has priced in the Reserve Bank needing to cut interest rates this year.

I’ve argued before in this space that it would be a particularly fine opportunity to begin to redress the slide in public social and affordable housing – something that can be done relatively quickly that would pick up looming slack in housing construction.

Unfortunately, that doesn’t seem to resonate with the present government. And it’s not the sort of spending the National MPs want to take back to their electorates. Thus the danger of rushed political decisions on seriously big spending.

Fortunately, the guide is already available for just this sort of time. It was in the final paragraphs of the first speech by then-Reserve Bank governor Glenn Stevens after the 2015 budget. Those paragraphs are worth quoting in full:

“As often remarked, infrastructure spending has a role to play in sustaining growth and also in generating confidence. I am doubtful of our capacity to deploy this sort of spending as a short-term counter-cyclical device,” Mr Stevens wrote.

“The evidence of history is that it takes too long to start and then too long to stop. But it would be confidence-enhancing if there was an agreed story about a long-term pipeline of infrastructure projects, surrounded by appropriate governance on project selection, risk-sharing between public and private sectors at varying stages of production and ownership, and appropriate pricing for use of the finished product.

“The suppliers would feel it was worth their while to improve their offering if projects were not just one-offs. The financial sector would be attracted to the opportunities for financing and asset ownership. The real economy would benefit from the steady pipeline of construction work – as opposed to a boom and bust. It would also benefit from confidence about improved efficiency of logistics over time resulting from the better infrastructure. Amenity would be improved for millions of ordinary citizens in their daily lives. We could unleash large potential benefits that at present are not available because of congestion in our transportation networks.

“The impediments to this outcome are not financial. The funding would be available, with long-term interest rates the lowest we have ever seen or are likely to. (And it is perfectly sensible for some public debt to be used to fund infrastructure that will earn a return. That is not the same as borrowing to pay pensions or public servants.) The impediments are in our decision-making processes and, it seems, in our inability to find political agreement on how to proceed.

“Physical infrastructure is, of course, only part of what we need. The confidence-enhancing narrative needs to extend to skills, education, technology, the ability and freedom to respond to incentives, the ability to adapt and the willingness to take on risk. It is in these areas too, where there are various initiatives in place or planned, but which often do not get enough attention, that we need to create a positive dynamic of confidence, innovation and investment.

“That is the upside we need to create.”

And that is the sort of ideal, the goal, our nation could and should aspire to.

I haven’t seen any politician even try to define the infrastructure role as well as Mr Stevens did, though the non-partisan Infrastructure Australia crew still speak warmly of the discipline Anthony Albanese displayed and instilled when he was the relevant minister.

It might be too much to hope that Treasurer Frydenberg, and whoever formulates subsequent budgets, might use Mr Stevens’ words as their guide.

Oh, the second point worth making? It was in a tweet by conservative commentator and former media director for Mike Baird when he was NSW premier.

Responding to a comment about people overstating the link between state and federal elections, Imre Salusinszky wrote: “It’s more complicated than that. The result is ominous for the federal Coalition. ‘Banking’ a competent, united and moderate state Coalition Government is part of the process of getting the baseball bats ready for the chaotic federal version.”

It’s more complicated than that. The result is ominous for the federal Coalition. “Banking” a competent, united and moderate state Coalition Government is part of the process of getting the baseball bats ready for the chaotic federal version. https://t.co/5mA40FDAiO