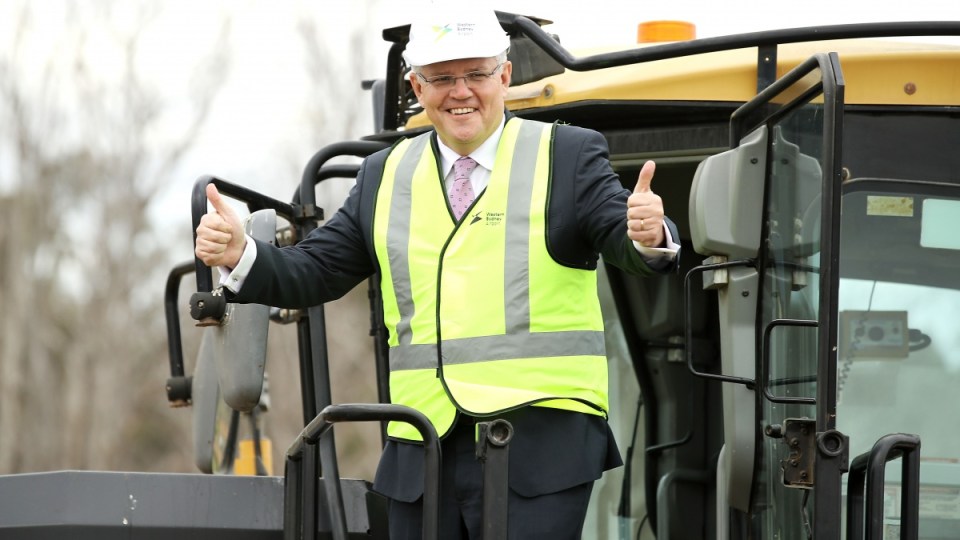 While you were watching (or ignoring) the ABC board implode following the sacking of its chief executive, you might have missed the news about Scott Morrison receiving an early Christmas present.

It didn’t come from the latest Newspoll, which showed an improvement for the ‘new’ government over the past fortnight but still confirmed that Labor remained in an election-winning position.

No, the gift came from an unlikely source, Treasury, which published a serious-sounding tome on Tuesday called the Final Budget Outcome.

Many Australians don’t spend a lot of time thinking about the budget or the economy, probably even less time than they want to think about the ABC squabbling with the government.

As long as mortgage rates are low, and there are not too many new taxes in the latest budget, most voters are usually content to place their trust in the government of the day to responsibly manage the nation’s money.

Coalition governments don’t mind that most voters don’t look too closely at such matters, because it helps to maintain the myth that Liberals are better economic managers than Labor.

In fact, it’s almost impossible to overstate how important this myth is to the Coalition’s chances at the next election. It’s pretty much the only policy area where the Coalition is seen to be better than Labor, other than ‘stopping’ the boats.

This week’s report from Treasury is a gift for Mr Morrison because it strengthens his government’s claim to being better managers of the economy. The report is released by Treasury every September to compare what the government predicted in the previous year’s budget with what actually happened in the economy.

If the predictions are too optimistic, the government ends up receiving less and spending more money than it planned. That’s how we end up with budgets in the red (deficits) and a national debt that grows every time the government needs to borrow money to cover its spending.

But when the economy does better than the previous year’s budget predicted, the government ends up with a double bonus – it has extra cash to spend or reduce debt and it gets kudos for delivering more than was promised. This is what Treasury’s report delivered for the PM this week.

On almost every measure, Mr Morrison’s budget from last year did better than anticipated. It made more money than expected, spent less than planned, and reduced the deficit by half. Not all of this was due to the government’s superior economic management – for example, spending was down partly because there was a slower-than-expected uptake of the NDIS – but that’s not going to stop PM Morrison from taking the credit.

If the Coalition doesn’t lose government between here and the end of the year, which is possible, it will publish its next economic statement just before Christmas.

Given the federal election must be held by May 18, this makes the Mid-Year Economic and Fiscal Outlook statement in December the PM’s last big chance to spruik his government’s economic credentials before the campaign begins in early 2019.

Five months ago, Treasurer Scott Morrison announced the government would bring the budget back into the black (a surplus) by the middle of 2020. Now political observers are expecting Prime Minister Scott Morrison to announce the surplus has been achieved 18 months early. Mr Morrison will make a big deal of this being the first surplus since the days of the Howard government, and he will remind voters that Labor last had a budget surplus in 1989.

For its part, the Labor opposition will reply that the Abbott/Turnbull/Morrison government has racked up a national debt twice the size of the debt it inherited from the Rudd/Gillard/Rudd government.

And Labor will relentlessly emphasise the one part of the economy that the Coalition is finding it hard to improve – wages growth.

While the economy and employment have grown faster than predicted in last year’s budget, and unemployment is less than expected, wages growth was only 2.1 per cent, compared to the budget forecast of 2.5 per cent.

During the election campaign to come, Labor’s challenge will be to get voters to attribute the wages slump to the poor economic management of PM Morrison and his government.

It’s a challenge that Labor, ably assisted by the formidable campaigning resources of the union movement, is certainly capable of meeting.

But it will take a considerable effort to remove the smile from the PM’s face when he delivers the Australian people with his own Christmas present, the Coalition government’s achievement of an early budget surplus.