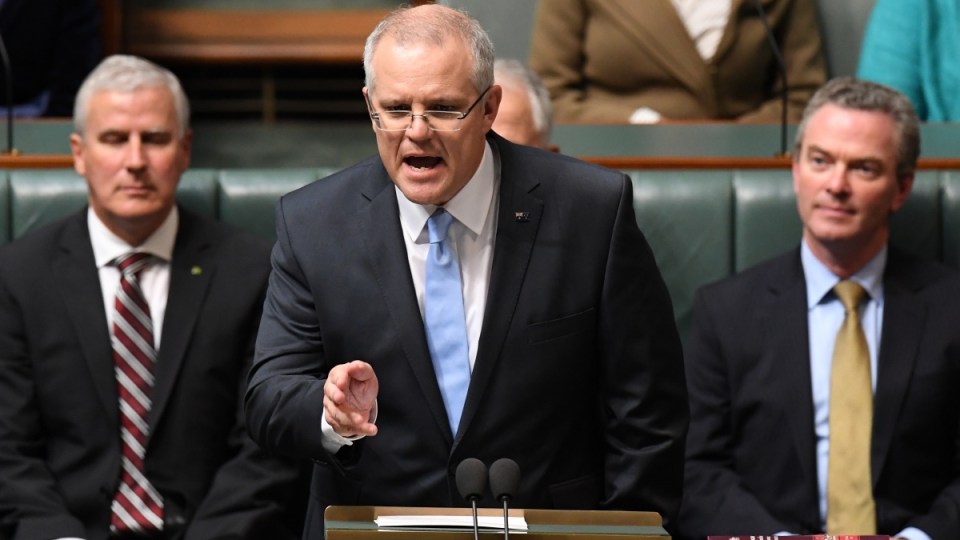 The vast majority of Australians will get tax cuts under a federal budget that begins an overhaul of the nation’s income tax system that will cost $140 billion over the next 10 years.

Treasurer Scott Morrison’s plan would see tax brackets lifted by tens of thousands of dollars, dropping large numbers of Australians into lower tax brackets and more than compensating for years of bracket creep.

But there’s a condition. The biggest elements of the three-point plan announced Tuesday night would not come into force until after the next federal election, meaning voters may have to pick the Coalition at the next two polls if they want to see the tax cuts become a reality.

The measure, which the government says would cost about $13 billion over the next four years, but lifting to $21 billion every year after that, was the headline of a budget that was buoyed by an unexpected revenue boost and that had all the hallmarks of an election pitch.

“A stronger economy. More jobs. Guaranteeing essential services. The government living within its means. That is what this budget is about,” he told parliament when handing down the budget.

Other important measures focused on retirees, and included measures to generate private income streams in retirement. Most notably, the government will act as a bank, lending retirees money against the value of their homes, which they must take as a fortnightly income.

Some other key features of a budget the Treasurer called “the best budget outcome since the Howard government’s last budget a decade ago” included:

The ABC also suffered. In an email to staff of the public broadcaster on Tuesday night, managing director Michelle Guthrie said she was “disappointed and concerned” with the cut of $83.7 over three years to the ABC’s $1billion budget.

The Treasurer predicted a deficit of $14.5 billion next year, and then a return to surplus of $2.2 billion in 2019-20, a year earlier than expected.

He said the surplus would shoot up to $11 billion the next year, and $16.6 billion the year after that.

That, the budget papers suggested, would be achieved without major cuts or tax increases, and is largely down to an unexpected windfall in tax revenue, and rosy economic forecasts.

This would allow major income and business tax cuts and major spending on infrastructure.

In a budget that was otherwise light on dramatic policies, some of the biggest cash splashes were on state infrastructure.

In his speech, Mr Morrison also put emphasis on law enforcement, with measures to crack down on corporate tax avoidance and – through a new “Black Economy Taskforce” – the black economy.

He said that while the national economy is strengthening, “it is also true that the benefits are yet to reach everyone”.

“This will take more time.

“That is why it is important to stick to our plan. There is more to do. We cannot take a stronger economy for granted.

“We live in a very competitive world. If we make the wrong calls, other countries will ‘cut our lunch’. There is a lot to gain and much to lose. We can’t ease off.”

Most Australians get a (small) tax cut

The first measure in Mr Morrison’s three-step income tax cut plan will see all Australian taxpayers who earn between $48,000 and $90,000 receive a cash rebate of $530 at the end of the tax year.

This will be implemented in July this year, meaning Australians won’t receive the rebate until the end of the 2018-19 tax year.

The second step deals with bracket creep on a massive scale. The first change, implemented on July 1 this year, will lift the upper limit of the third-tier tax bracket from $87,000 a year to $90,000.

The plan will see most most Australians by 2024 paying much less income tax – hence the huge cost to the budget. However, these measures take place over two election cycles, meaning the Coalition must win another two elections in a row – equalling John Howard’s record of four terms – to secure their passage into law.

To help retirees turn their assets into income, the government announced it will extend a little-known scheme called the Pensions Loan Scheme.

This involves the government acting like a bank, lending Australians money against the value of their home – generally known as a reverse mortgage or equity release.

Previously this was open only to people on a part pension.

But under the new rules, coming into force on July 1, 2019, all Australians – including those on a full age pension – will be able to borrow up to $17,800 (for a couple) a year against the value of their home. The money must be taken as a fortnightly income stream.

Alongside this measure, the government will also increase the Pension Work Bonus from $250 to $300. That means retirees will be able to earn up to $300 a fortnight ($7800 a year), without affecting their age pension eligibility.

The government will also change the law to make it easier for retirees to take an income from a deferred lifetime annuity – a “longevity insurance” product that guarantees a set income for as long as the policyholder lives.

Together these measures will address the danger that retirees will spend their super too quickly and spend the rest of their lives on the age pension – increasingly the most costly part of the budget.