Treasurer Scott Morrison tweeted he handwrote his speech "back in the office" on Tuesday morning. Photo: Twitter

Australians earning as much as $200,000 will be subject to the same tax rate as those earning as little as $41,000 under Treasurer Scott Morrison’s plan to flatten Australia’s progressive tax system.

His promise of income tax cuts worth $140 billion would bring the vast majority of working Australians into the same tax bracket, meaning high-income earners would contribute a much smaller proportion of overall tax revenue than they currently do.

The policy would see almost every working person pay less tax, largely by bringing the vast bulk of Australians into one tax bracket.

Opposition Leader Bill Shorten tweeted immediately after Mr Morrison’s speech: “Every Budget is about choices. Yet again, Turnbull has chosen the top end of town – and he’s making you pay for it”.

The allure of tax cuts is likely to wedge the Labor Party in an election campaign that could come as early as July.

Labor is much more ideologically sympathetic to a progressive taxation system that taxes higher-income people to pay for the essential services for lower-income people.

However, the battle for middle Australia could see Labor tempted to offer tax cuts that go against its principles simply to win an election.

Mr Morrison has thrown down the gauntlet to Mr Shorten with this budget. We’ll get a sense of Mr Shorten’s approach when he delivers his budget reply speech on Thursday.

Over the next four years the tax cuts proposed by Mr Morrison will cost the government a total of around $13 billion. Projected increases in economic growth and tax revenue more than make up for that.

But the most substantial cuts will not come in until 2024, two years after Treasury’s four-year ‘forward estimates’ end.

The budget papers themselves don’t reveal how much those tax cuts will cost, but Mr Morrison told media on Tuesday that they would amount to $140 billion over the next 10 years.

The majority of the effects of the tax cuts will be felt after 2022 – which is the last year the government provided projections for.

From 2022 onwards no one is making any predictions on what the economy will be doing.

If the economy took a turn for the worse before 2024, then the government could be faced with a massive hole in its revenue, which it would have to fill either by borrowing more or cutting services.

Mr Morrison was able to promise significant tax cuts thanks to a stronger-than-expected economy delivering a boost to revenue.

That boost meant the government could offer modest tax cuts over the next four years without making any notable cuts to spending or increasing borrowing.

Over the next four years Treasury projects income tax and company tax revenue to increase significantly. 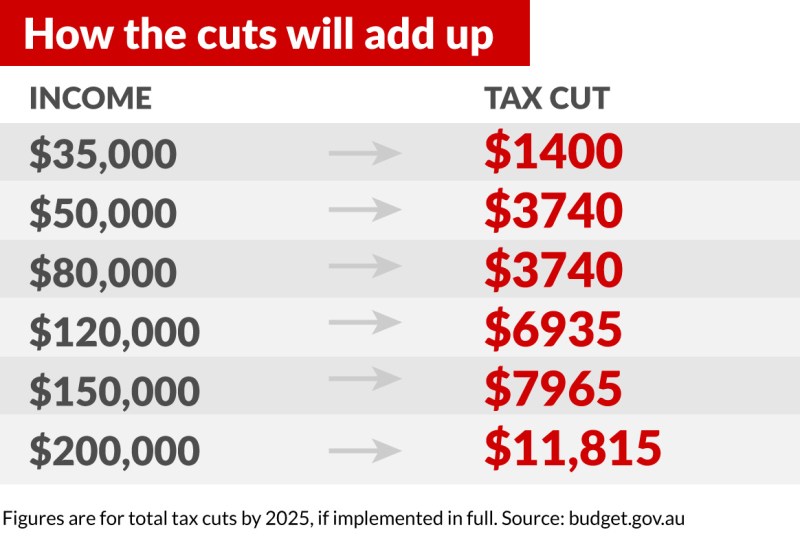 Treasury’s optimism is backed up by the Reserve Bank of Australia, which has also predicted strong GDP growth over the same period. However, after those four years both Treasury and the RBA go quiet.

Tuesday’s budget is likely to be the last before the next federal election, and the tax cuts will be seen by many as a pre-election sweetener, and not necessarily with an ideological agenda.

Under @ScottMorrisonMP's plan a hedge fund manager on $200,000 a year gets 10 times the tax cut as the person who trims the hedges around his mansion #budget2018 #auspol

However, the decision to wind back Australia’s progressive tax system and replace it with a much flatter one is an ideologically conservative policy in keeping with the view that individuals and the private sector should provide the majority of a nation’s services.

While no one will immediately be paying any more tax, higher-income Australians will proportionally be paying a lot less.

“We need a progressive taxation system in Australia and we’re going to have to fight for it now.”

In good times economic activity will make up for that loss. In bad times, the government coffers will be under much more pressure, meaning services may be cut.

Increased disposable income also will have the effect of encouraging private individuals to self-fund things like retirement and healthcare – services which progressive tax systems are designed to pay for, so that low-income people can access them.

This would build momentum towards a more privately-funded economy – something to which the Liberal Party aspires.