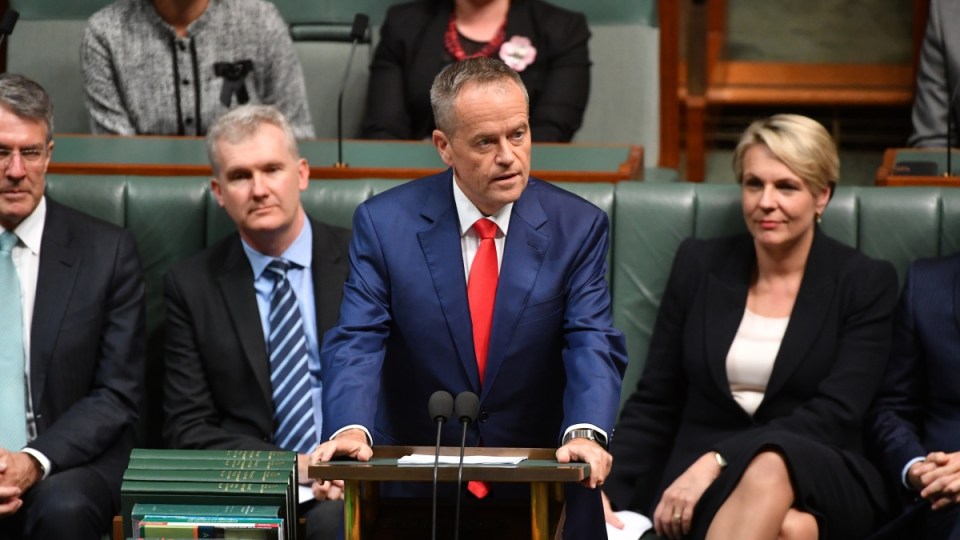 A feisty Bill Shorten has labelled the Turnbull government’s budget “an admission of guilt” that still “fails the fairness test” as he revealed Labor would support a hike in the Medicare Levy – but only for Australians in the top two tax brackets.

The Labor leader used his budget reply speech on Thursday night to rail against what he called a government for “millionaires and multinationals”, seeking to differentiate the opposition from a budget that has been repeatedly described as “Labor-lite”.

“This is the budget of a government that wants to bury its past and re-write its history,” Mr Shorten told Parliament.

“This budget is an admission of guilt. A signed confession.”

Speaking to a packed gallery of party faithful, he revealed that Labor would support the government’s planned increase to the Medicare levy, which Treasurer Scott Morrison says will raise $8 billion to fully fund the National Disability Insurance Scheme, but only with changes.

“We’ll back the government’s 0.5 per cent increase in the Medicare Levy, but only for Australians in the top two tax brackets,” Mr Shorten said. That would mean it only applies to workers who earn more than $87,000.

To remedy the shortfall, Labor would make the 2 per cent deficit levy on those who earn more than $180,000 permanent, which Mr Shorten claimed would “deliver more revenue than the government’s [plan] over the medium term”.

“This Prime Minister has chosen multinationals and millionaires, over middle- and working-class families,” he said.

“And he’s chosen his own political survival over everything else.

“This is the Liberal version of tax and spend.”

As expected, Mr Shorten also seized on the government’s admission in Question Time on Thursday that its full company tax plan would now cost $65.4 billion – rather than $50 billion – over 10 years.

But he did not say whether Labor would reverse the already-legislated tax cuts for small- and medium-sized business, which passed the Senate in March.

In a speech heavy on class-based rhetoric, Mr Shorten also confirmed Labor would:

The opposition would also restore the $22 billion it claims the government has cut from schools funding since the 2014 budget – a figure Labor frontbenchers had previously failed to confirm.

And in a move perhaps aimed at quelling internal party divisions over calls for a “Buffett rule”, Mr Shorten said Labor would cap the amount people can deduct on accountants’ fees at $3000, which he insisted would save $1.3 billion over the medium term.

“The days of earning millions and paying nothing, are over – no matter who you are,” he said.

Mr Morrison’s budget has drawn comparisons to Labor due to its big spending on infrastructure, because it imposes a tax on the banks and hikes the Medicare levy to fund the NDIS.

But Mr Shorten rejected those comparisons on Thursday night: “This isn’t a Labor budget and it’s not a fair budget. Because we are not you and you will never be us.”

He said the “great irony” of the budget was that it didn’t “measure up” to Labor values or “keep faith with Coalition values either”, and labelled it a document of “big government”, “higher tax” and “more debt”.

Deputy Prime Minister Barnaby Joyce said the cap on tax deductions for the use of accountants was an “all out attack” on their income stream.

Budget 2017: Bill Shorten rails against a budget that ‘fails the fairness test’