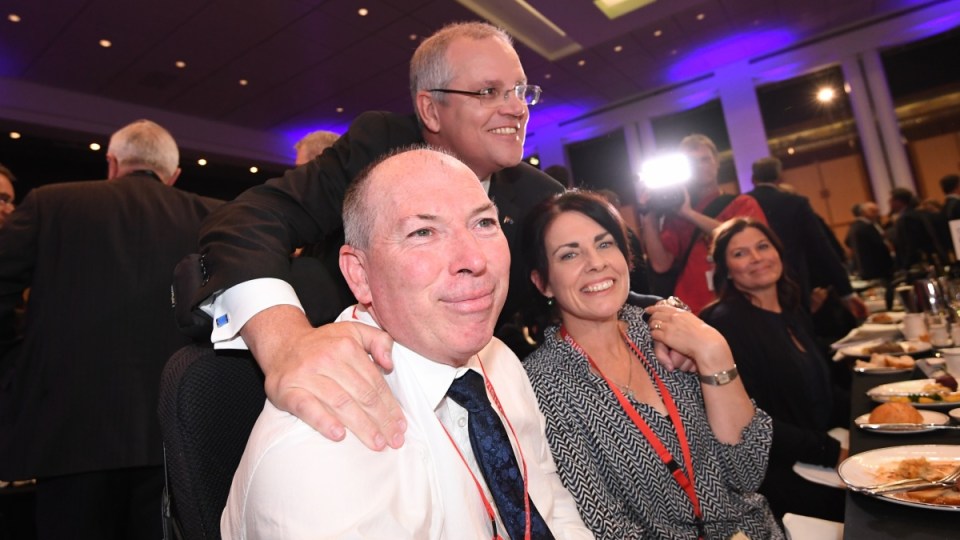 Treasurer Scott Morrison spoke about his brother-in-law Gary, right, in a speech on Wednesday. Photo: AAP

Stepping away from the pie charts, the line graphs and the impenetrable language that is often used to explain the nation’s finances, Treasurer Scott Morrison instead opted on Wednesday for anecdote as he told Australians of the need to raise taxes.

Preparing to launch into a story about his brother-in-law, Gary Warren, he warned the audience he might get emotional.

“Forgive me as I try to get through this,” he told the National Press Club.

As the government pursues a tax hike to fully fund the National Disability Insurance Scheme, Mr Morrison spoke about Gary, a fireman, who lives with multiple sclerosis.

“He was a very physical guy, Gary, I remember. Going on hikes, canyoning. I wasn’t doing that, but he was,” the Treasurer said.

“[It was] the aggressive form of MS. He knew it at the time.”

The diagnosis came when Gary’s oldest son was just eight, the Treasurer said.

He explained how Gary had kept working after his diagnosis, first in different roles at the fire station, before he moved to call centres when he began to struggle with mobility.

Even then, he would take public transport to his new jobs at various call centres.

“But Gary told me just how helpful his fellow commuters, fellow Australians were. People, he’s told me, are enormously generous, not just happy to help, but keen to help,” Mr Morrison said.

“But if there’s anything good about it,’ he said, ‘it’s that you’re disabled in Australia.’ That’s an incredibly generous statement about the big heart of Australians. He and I both know they have big hearts.”

Gary, who is wheelchair-bound and was in the audience on Wednesday, was an example of why the Treasurer was asking “Australians to chip in” for what he called a “compassionate cause”.

“That’s what this is about. That story,” he said.

The government revealed on Tuesday that Australian workers would be hit with a 0.5 per cent increase in the Medicare levy – to 2.5 per cent – with the $8 billion raised to meet a funding gap in the insurance scheme.

Under the government’s plan, the Medicare levy would increase in 2019, a tax increase that would affect all but the very poorest Australians.

Labor, which introduced the National Disability Insurance Scheme and disputes that it’s not fully funded, is yet to say whether it will support the increase.