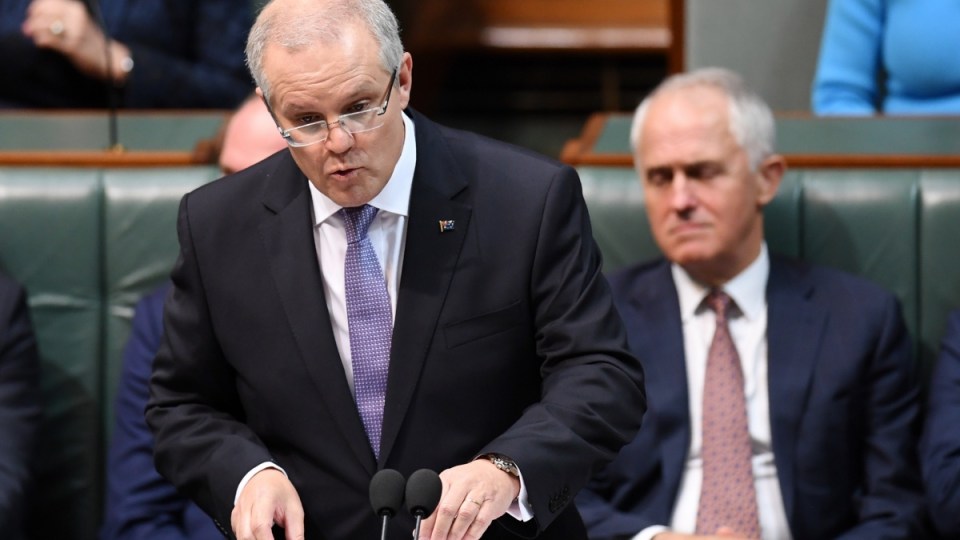 Treasurer Scott Morrison, in his budget speech and in his lock-up news conference, was very eager to share the plaudits with the Prime Minister Malcolm Turnbull.

The two of them have certainly buried not only the legacy of the Abbott-Hockey 2014 political fiasco but 15 years of Coalition budget holy writ.

At least that was their clear intention. Whether it succeeds is now the big question.

Just consider this for starters: a Liberal Treasurer has hit the five biggest banks with a $6.2 billion tax hike to help fund a $10 billion Medicare package.

By the next election, due in two years, the freeze on all the Medicare benefits schedule will be thawed. Labor was demanding an instant defrost, and if voters are angry that didn’t happen the Treasurer and the Prime Minister are counting on any negativity dissipating before they get to the ballot box.

And in an attempt to firewall the Liberals from another “Mediscare”, a new Medicare Guarantee Fund will be set up to pay for all the expenses of the universal health scheme, including the Pharmaceutical Benefits Scheme.

And from the man who spent much of his first months in the Treasury portfolio saying Australia had a spending problem not a revenue problem, we have a huge half a percent rise in the Medicare levy. It’s to pay for the National Disability Insurance Scheme “because we couldn’t do it by spending cuts and it’s the right thing to do”.

In case you missed it, that’s an income tax rise.

The opposition was expecting a “Labor-lite” prescription from Mr Morrison. The only quibble with that description would be over the word “lite”.

The budget numbers are vulnerable to the charge that this is a big-taxing, big-spending splash. There’s little doubt that is the way Tony Abbott in opposition would have attacked it. Will he saddle up to ride that horse again? A return to surplus

Mr Morrison has paid due deference to one conservative holy cow. He is forecasting a return to surplus at the end of the decade. Mind you, treasurers, both Labor and Liberal, over the past decade have had a habit of setting their sights on this goal only to find it keeps eluding them.

This time the Treasurer is counting on the world economy delivering better days and, can you believe, for wages to start outstripping inflation next year.

It will be fascinating to see if the unions read the budget papers as an invitation to start pressing harder for wage rises.

A sure hint that this budget is a survival plan for Mr Turnbull and Mr Morrison is the complete abandonment of the pension assets test that so angered the Liberal heartland. The pensioner concession card will now be restored to those impacted.

Left in place is the $50 billion corporate tax cut. The top end of town gets a cut while university students get what amounts to an 8 per cent tax hike as their fees rise.

The budget shows no intention of caving in to the cries of “unfair” coming from Catholic bishops over the Gonski 2.0 school funding arrangements.

With one MP, Kevin Andrews, suggesting in the party room he may not be able to support the measures in Parliament, this drama has a while to play out.

Government strategists are pretty upbeat that Mr Morrison has “neutered Labor”. He may not have neutered the conservatives in his ranks.

He, like the Prime Minister, better hope that the better days start showing up in the opinion polls.

Budget 2017: The Treasurer hopes for better days ahead